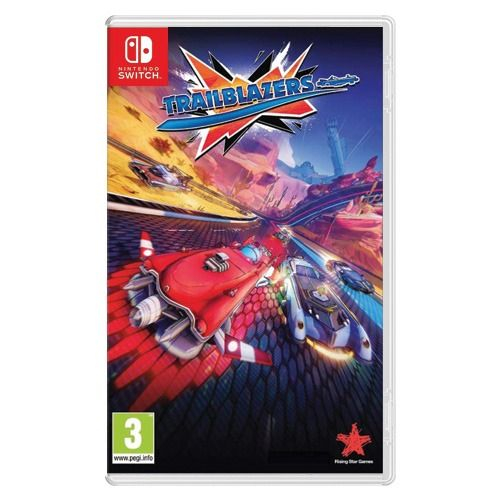 £7.99 Free P&P FreeMonster-Shop Deals
3
Get deal*Get deal*
3Get deal*Get deal*
Posted 30th May
Trailblazers is a fresh new co-operative racing title with an innovative on-track game mechanic: paint the track, boost on your colour and work as a team to win.

Racing in teams of up to three-versus-three, players paint the track as they race, capturing key areas to dynamically change the racing line, then boosting on their team’s colour. Racers who drive with flair and style will also amass skill points to blaze their way to victory.

Players can experience the blistering high-speed action with up to six players online, or locally via split-screen for up to four local players with additional online or CPU-controlled challengers. Loaded with multiplayer thrills and a series of single-player challenges across an extended campaign mode, Trailblazers is an audio-visual onslaught of retro-futuristic style and attitude.

The game takes place in a lavishly presented world from the creative mind of BAFTA award winning artist Will Milton. Players race through expansive and stunning scenic tracks set across locations ranging from mountain tops to lush forests and arid desert valleys. Aural soundscapes are provided via the officially licensed soundtrack featuring leaders of the Future Funk genre, including Get On Up by Skope, Bad King Kong by The Derevolutions, and Dead Ringer by A.Skillz.
PostTweetShare Share with WhatsApp Share with Messenger
Community Updates
Monster-Shop Deals
New Comment SubscribeSave for later
3 Comments
30th May
Good game for the money.
30th May
Thanks for making me spend money today!
30th May
Good game, it also has crossplay between