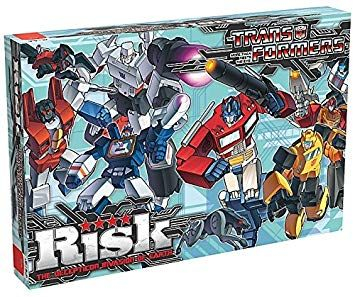 Not the war for cybertron version but may be of some use to someone.

The classic strategy game now in a Transformers Edition!
Choose your side, deploy your armies & go into battle!
Autobots & Humans battle against Decepticons for Earth
Includes several Transformers-specific scenarios
Suitable for ages 10 & up, the whole family can enjoy!
Description

Invade Earth with your Decepticon horde or defend humanity as the Autobot army in this brand new version of the classic strategy game, Risk.

Thanks, I did spot @msmyth deal for the star wars whot so thought they must be reputable
31st Dec 2019
Ha, deploy your armies Is that what happens when you put your coat on and armies come out of your sleevies ( asking for a friend called Eric !!! )
31st Dec 2019

Eric sounds like a fun guy. You've landed on your feet there
31st Dec 2019

Eric sounds like a fun guy. You've landed on your feet there

very dense, needs everything explaining in detail - you know the type !
31st Dec 2019

Where did napoleon keep his armies though?
31st Dec 2019

Where did napoleon keep his armies though?