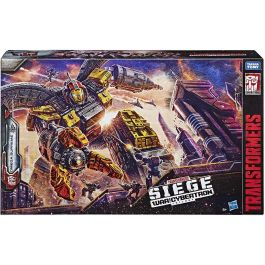 Great toy for kids and adults.

Included Micromaster, Autobot Countdown, fits inside rocket, tank and control tower, and can ride around the defence perimeter

Build the ultimate battlefield with Siege figures. Siege plunges fans into the epic fight to survive on the final day of the Autobot and Decepticon battle to control Cybertron. As the Autobot counter-resistance takes on the Decepticon resistance army, the unyielding Autobot army captain and city defender, Omega Supreme, lies in wait – the Autobots’ last line of defence.


This colossal 2-foot scale Titan Class WFC-S29 Omega Supreme figure features G1-inspired design and converts to Autobot Command Centre mode, with tank, rocket, control tower and defence perimeter. Included Micromaster, Autobot Countdown, fits inside rocket, tank and control tower, and can ride around the defence perimeter. Includes 6 Fire Blasts accessories to simulate battle effects on figure and Command Centre mode.
PostTweetShare Share with WhatsApp Share with Messenger
Community Updates
Bargainmax.co.uk DealsBargainmax.co.uk discount code
New Comment SubscribeSave for later
3 Comments
4th Apr
Bargain max are a good company, I have bought from them before. This is a good price considering its size. I know if you hold on to it you can't sell it on if its pristine for more money.
4th Apr
You are a star, I thought I’d missed out on this at even retail price and had been looking across sites for a while
thank you, and PayPal protected helps give assurance
4th Apr
I'd rather it was Trypticon but good deal