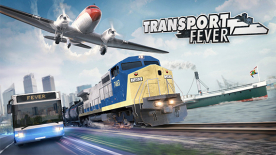 Lowest price I have seen. The sequel is out, but many prefer the original.

About This GameTransport Fever is a railroad­-focused tycoon game. Players start in 1850 and build up a thriving transport company. As an emerging transport tycoon, the player constructs stations, airports, harbors and makes money by connecting areas requiring transport services.

Master challenges and get entertained in the campaign game mode. Two campaigns consisting of a multitude of missions with increasing difficulty can be tackled. Missions of the American and the European campaign tell the historical context of the 19th and 20th century and offer a wide range of real­world transportation challenges.Game Features
PostTweetShare Share with WhatsApp Share with Messenger
Community Updates
Greenman Gaming DealsGreenman Gaming voucher
New Comment Subscribe Save for later
6 Comments
25th Jan
Isn't this a blatant rip off of Transport Tycoon?
25th Jan

Isn't this a blatant rip off of Transport Tycoon?

It is, but it’s a very good one. It’s basically a modern remake like hospital 2.0 is of theme hospital. (Disclaimer it’s one of those games where you think you have been playing for a hour or two tops but after a bit spot it’s 2am ...)
25th Jan
There's a sequel out as well. Assuming it's a more refined game it might be a better investment.
26th Jan

Here's a quote from a steam review of the sequel:

''Kinda bugs me to give it a NR review so I'll explain.
If you've played Tf1 already you've basically already played TF2. Besides a few UI improvements and the drastic reduction in industry use it's the same game with a graphics overhaul. Basically the game itself will be saved through the use of mods because from what I can tell Vanilla does not add much at all to the original title.
Especially for the price I just dont see this worth the cost. Played free mode for a day and feel like I've already seen everything before. The train selection is weak too. But im sure mods will handle that.
Still 40 bucks for a graphics overhaul is not worthy of a sequel but maybe a DLC upgrade.''
26th Jan
Open Transport Tycoon is free!
26th Jan

Fair enough. That's a fairly common complaint for a lot of sequels. I suppose they have a working formula and haven't changed much. That's a shame but it's quite a new release so hopefully they will invest more into it over time.
Very good price for the original though.