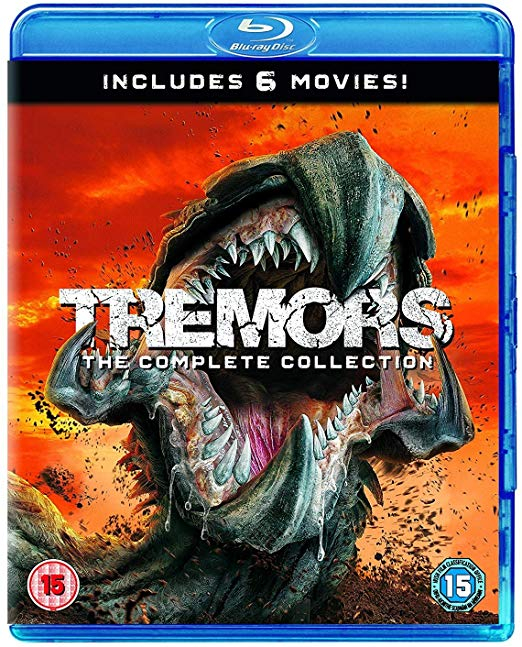 All 6 films (so far) in the Tremors film series.

Kevin Bacon and Fred Ward are in a fight for their lives when they discover that their desolate town has been infested with gigantic man-eating creatures that live below the ground!

The giant underground creatures are terrorizing their way through Mexican oil fields, gobbling up everything and everyone -and only one man can stop them! In the style of its predecessor, this comedy sci-fi creature feature reunites two desert desperados who take on the task of destroying the monsters

Tremors 3: Back to Perfection

Those morphing, man-eating monsters are shaking things up again in the little town of Perfection, and survivalist Burt Gummer s the only solution to the latest in evolution!

This prequel to the original phenomenon will thrill you with incredible action sequences and earth-shaking special effects created by the award-winning team behind the first box-office hit!

The stakes are raised for survivalist Burt Gummer in his most dangerous monster hunt yet. When Gummer's hired to capture a deadly Ass Blaster terrorizing South Africa, he and his new sidekick, Travis Welker engage in a battle of survival against the fiercely aggressive ass-blasters and Graboids.

Tremors 6: A Cold Day in Hell

Burt Gummer (Michael Gross) and his son Travis Welker (Jamie Kennedy) are called to a research facility in the frozen tundra of the Canadian Arctic. They find themselves up to their ears in Graboids and Ass-Blasters investigating a series of deadly giant-worm attacks. Burt begins to suspect that Graboids are secretly being weaponized, but before he can prove his theory, he is side-lined by Graboid venom. With just 48 hours to live, the only hope is to create an antidote from fresh venom - but to do that, someone will have to figure out how to milk a Graboid.
PostTweetShare Share with WhatsApp Share with Messenger
Community Updates
Amazon DealsAmazon discount code
If you click through or buy, retailers may pay hotukdeals some money, but this never affects which deals get posted. Find more info in our FAQs and About Us page.
New Comment Subscribe Save for later
9 Comments
23rd Nov 2019
beat me to it orderd it great price very hot
23rd Nov 2019
Bare in mind,it says usually dispatched between 1-2 months.
23rd Nov 2019
Never new there were more than two films. First was a good film.
23rd Nov 2019
Wow, they made 6
23rd Nov 2019
Don’t think I’ve seen any of these but look like a bit of fun. Ordered to watch over Xmas (hopefully). Thanks!
23rd Nov 2019
There was also a Tremors TV series in 2003


And Kevin Bacon signed on to a series couple of years ago that would have been a sequel to the original movie, but the network made the first episode and decided not to go forward with it.

First is an all time classic.