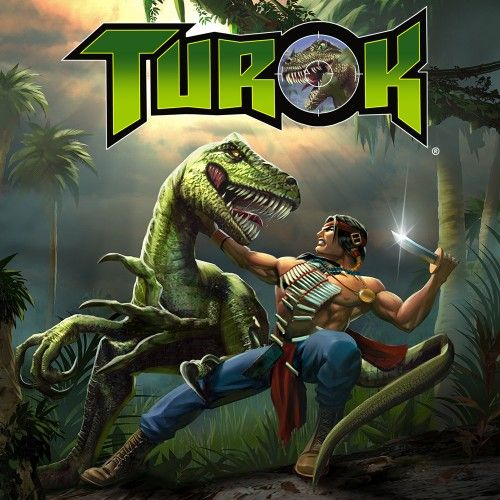 Turok is back and no dinosaur is safe! When it was first released in 1997, Turok introduced gamers to a world teeming with cunning enemies, traps, puzzles and deadly weapons all within a vast 3D environment ready to explore. Now the classic game has been restored and enhanced with a new visual engine and exciting new features to sink your teeth into!

A world where time has no meaning – and evil knows no bounds. Torn from a world long gone, the time traveling warrior Turok has found himself thrust into a savage land torn by conflict. An evil overlord known as ‘The Campaigner’ seeks to shred the fabric of time and rule the universe using an ancient artifact known as ‘The Chronoscepter’.

To learn more you must enter the world of Turok!

Run, jump, climb in any direction in a fully 3D world, with the ability to independently look and aim your weapons up, down, or sideways.

From the Grenade Launcher, Plasma Pulse Rifle and Alien Weapon, to the Quad Rocket Launcher and, the mother of all guns, the Atomic Fusion Cannon!

Having defeated the Campaigner, Turok throws the Chronocepter into a waiting volcano to destroy it. Unfortunately the blast awakens an even deadlier force – The Primagen. Once again a Turok is tasked with restoring peace to the land and stopping the Primagen from merging Earth with the nether world.

Fight your way through 35 different types of enemies with bouncing bellies, blinking eyes, stretching tentacles and snapping jaws. From Prehistoric Raptors, to evolved Flesh Eaters, to your final battle with the Mother of all beasts— you’ll want to defeat all of them!

Enemies are intelligent! They’re smart enough to attack in groups, to flee when they are outgunned, and to take cover during a firefight.


Enemies flinch and spasm differently depending on which body part you hit.

Conquer 6 engrossing Quest Levels including the Port of Adia, the Death Marshes and the Lair of the Blind Ones.