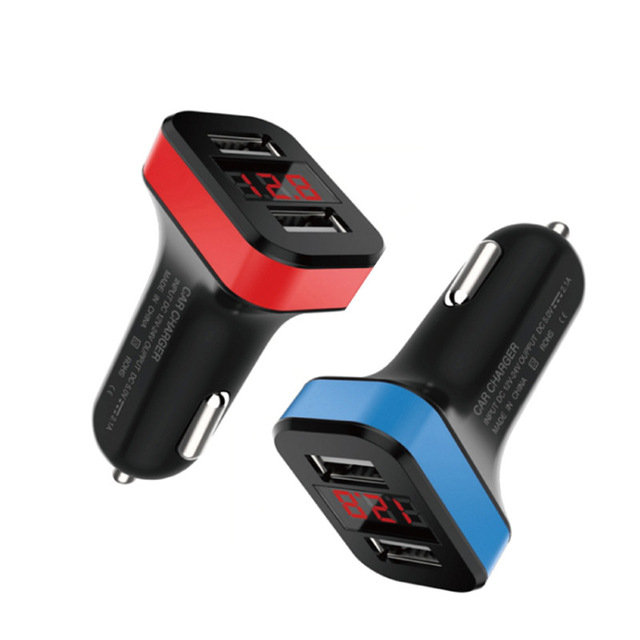 I have ordered (& received pretty quickly) 4 of these for various vehicles we have around, mainly older cars without USB's so thats handy but more importantly to me to have a battery voltage guide for rough weather to pre-empt when a vehicle would really benefit from a de-sulphating charge to extend the life of the battery.
At £1.49 delivered, it may not be mega powerful, but is useful for maintaining a charge or boosting smaller items whilst not playing guessing games with your car battery.

Have one fitted in my smart for two (450) which really benefits in terms of better battery care as it's awkward to get to, (I have a ctek charge adapter) .smoother semi auto gear change, ..& also in our leaf, because it doesn't have very good usb's.
Primarily though because of the battery read out, ,,,rather than get caught out from laziness or not driving the cars long enough to really boost the battery (short runs)

Stocking filler price surprisingly small & useful car kit that doesn't look cheap & nasty (subjective opinion)
Obviously if you need a higher draw look elsewhere but for basics this is a great bit of kit for vehicles with intermittent use . batteries whereby they are nearing the end off usable life.

The display isn't obvious when off, but clear & cycles through battery voltage, USB draw etc when connected every few seconds..

By turning the ignition you'll be able to see how quickly the battery recovers from having to turn the engine over (as a guide) ...surprisingly reassuring or whether you need to pull your finger out & top it up.


Option as per picture blue or red, twin refers to the x2 usb, 1 unit purchase not a pair.

Maxmix does have a point.

99% of the time the ciggy lighter socket blows is due to what is plugged into it going faulty. Not a problem if you know where the fuse is and how to change it but can be for most who can't even change wipers.
3rd Mar 2019

Wow, that is entirely their fault if they fail to either have the car manual, fail to read it, or only know how to drive it & call out recovery services to change a flat, you could say every deal on a phone is cold because they don't know how to use it / not their usual operating system & is the naffest excuse that really is a polite way of saying " too damn lazy".

With the amount of connectivity we have these days get on-line, look up a video tutorial of your vehicle / visit a forum for the brand, etc etc etc.

Not arguing with but just saying lots of people's brains switch off on certain subjects.

The only meal I can make palatable is a Pot Noodle. Can't cook a meal to save myself despite the trillions of cooking programs/guides etc. However I do have a degree in electrical & electronic engineering, am CISCO it certified & do ALL my car maintenance & repairs (only time my car sees a garage is for the MOT test).

By the way I voted HOT
4th Mar 2019
Tan, look up seriouseats.com

This recipe is all about the emulsification / micelles that the evaporated milk gets going..
(A lot of what baffled me was "why does this do this" which normal "cheffing" step over ..tv chefs, every darn time! ..a lot more info regarding whats going on, eg maillard reaction / effect ..that sort of thing becomes my hook to understanding (had me & the kid tempering chocolate for cake mixes etc, which had her making her own rather than scratch baking for her packed lunches to get used to equipment & basic technique in a set time frame.

Secondly I recommend everyone & their blooming dog, get an instantpot (best multi-cooker around) next time they are on sale, sounds ideal for you to cut, chop & pour ingredients into to make something nice quickly, efficiently & tastily, because the machine is pretty much automatic. (I grew up with an aga so this machine is heavenly)

Thirdly, go back to serious eats, look for something appetising, use the instructions & the video, both formatted pretty well & simply give it a go, (the instantpot does a fine chicken (but naff skin) in about 45 mins, (using minimal electric if you care to measure it) that then just needs finishing off in the oven to crisp it up (salt / flavour the skin, pop it in).

For roasts look up an "X" rack for even cooking in ovens (finishing off or cooking chicken all round) ...learn to cut a pork skin on a joint (stanley knife) & oil it, salt it for a roast,((thats getting your hands all over the pork) ..if you can do those things then there's alot of hope beyond pot noodles, ..my daughter first learnt adding up by making & weighing dumplings (instanpot allows you to make em fluffy /thru stodgy with aplomb) ..likely its the thing that will have you getting beyond a pot noodle.

If you can do a chook & a pork roast (decent crackling) then you are as far from simply wielding a pot noodle as it is possible to be.

If the pot noodle thing rings true, then one of the best cheapo investments I've made was for a santoku (slide & rock action knife) with 2 others for £3.99 at home bargains (BM). ..katsu (cut) meat, noodles & rev up the soup base a little,

With the amount of brain injurie(s) I have sustained I find many things really hard to do unless laid out properly, yet seem to be more alert than the average person who claims ineptitude, that is really infuriating, so for a simple locate the fuse box ...faaark!

I simply follow recipes in this manner of presentation till it sticks, .. then have it on standby as a memory prompter, the internet is a wonderful DIY dial up coach, but relies on the quality of the materials therein.

This afternoon, I've just altered a kitchen top cut out to accommodate to drop in a new electric hob, the sort of thing I bought a dremel for to help my kid not feel useless with tools, by the time she was 7 she'd fitted a vogels plasma t.v. mount (that extends) outward 18 inches, we've raised her with the mantra "I can do it, ..all by myself" since she was little.

Recently (aged 14) she fitted a projector mount upstairs for herself & assembled & wall anchored a large billy bookcase, just asked me to hold her steady & check it beforehand.

She's not interested in DIY (nor I) but the consequences of not knowing are damn expensive / limit life around the home & further afield, ...something I tackled head on to get my limbs working to be able to walk, talk in a coherent manner, (mostly) & work again, ..no manual for that though.

My brain is switched off to all subjects, I have to wade through treacle & have very little memory retention, I will still tackle stuff, but what makes uncertainty easier is tackling it with a buddy, I never do a job without the eyes & hands of a second person.because it allays a lot of uncertainty & the biggest crippler... "self doubt"

PS there are a lot of interesting things that come good from pouring boiling water over noodles, just sounds like you need the right style of pace / mechanics applied to your style of learning / ingredient add ins from where you feel comfortable.
seriouseats.com/201…tml

NB nothing wrong with going to the chinese wholesaler & picking up a box of noodles, ..I like the portion size of "mama" ..the flavours are pronounced good in an insulated container with a bit of home leftovers chunked beef, chicken or whatever, (hendersons relish) ..to that point I normally have at least 80 packets kicking around. Kettle, Duck flavour mama noodles (a recommendation of mine) ..throw in some frozen peas.