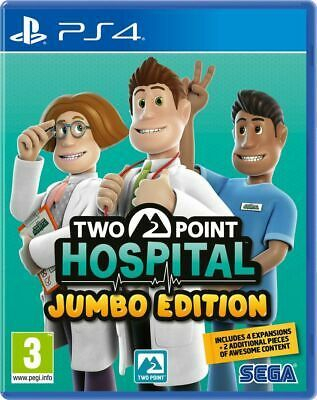 Seems a good price for the game + DLC's

Put simply, it’s a massive bundle of the very best Two Point Hospital content in one sumptuous collection.
Developed by Two Point Studios, with a long lineage of incredible management games under their belts as developers, Two Point Hospital smashed onto PC in 2018 and flew straight to the top of the charts.
Included in this JUMBO Edition (so called because it’s massive!) are four whopping premium DLCs (each adding new regions to the world of Two Point Hospital), and two great item packs (the Retro Items Pack and the Exhibition Items Pack), stuffed to the brim with exciting themed items to place around your hospitals.
All in all, it’s a case of…
MORE HOSPITALS, MORE CURES, MORE FUN!

• The best value Two Point Hospital deal yet, jam-packed with new content that new and old players alike will love!
• Includes the base game + four premium expansions + two item packs
• Traverse the vast reaches of Two Point County, with 27 hospitals in a variety of areas – from the snowy lands of the Bigfoot DLC, to the tropical climes of Pebberley Island.
• Includes over 189 bizarre illnesses, a huge array of cure machines bursting with personality, and loads and loads of items to place in your hospitals!
• With over 3 million happy players, there’s never been a better time to join the fun!
PostTweetShare Share with WhatsApp Share with Messenger
Community Updates
Post a comment