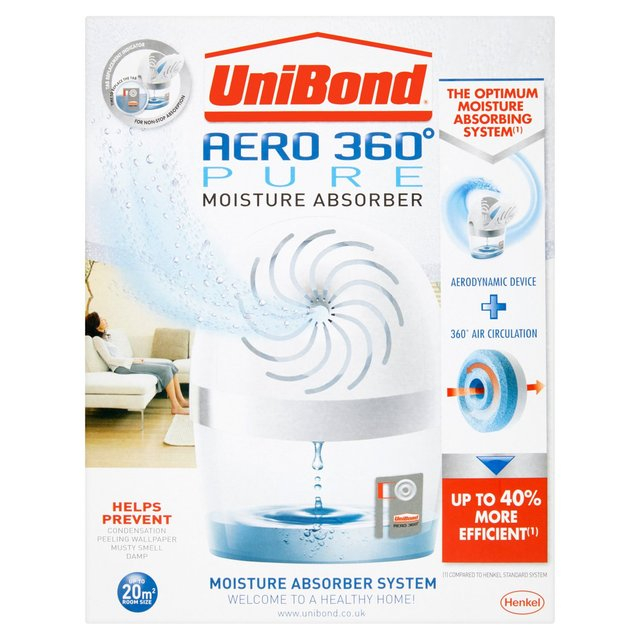 Hi guys, not sure if this is nationwide but I picked up the refill of the Aero 360 at Morrisons in Reading (priced at £8) and when I went to the self checkout it scanned at 50p so went back and got a couple more. Worth a look if you are in a Morrisons and you need some!

Why is there too much moisture?
12 litres of water in the air is the average daily quantity produced by a typical family due to daily activities such as cooking, taking a shower or bath, and gas heating.

What happens?
If the moisture trapped in the air cannot escape, it will condense in the coolest areas of the house, such as windows, in rooms without heating, or badly insulted walls.

What are the consequences of excess moisture?
On your comfort
Condensation, damp patches, feeling of cold.
On your belongings
Mould and mildew patches, peeling wallpaper, blistered paint, corrosion.
On your wellbeing
Damp air, musty smelling rooms and clothes, allergies.

The new moisture absorber system a quick way to healthier air
An optimal system based on 360° air circulation...
Based on the physical principle:
The greater the surface area between the refill Tab and the air, the higher the absorption capacity of the Tab.

The new system, Aero 360° Pure provides improved moisture absorption and up to 70% neutralisation of bad odours[3]. It works to improve air quality more rapidly.
[3] tested by an external specialist lab in 2009

Ultra-absorbent refill Tab
New design: wave shaped with a hollowed out centre. 2 in 1 technology: anti-moisture and anti-odour.
Aerodynamic device
Air circulates around and through the suspended Tab.
Easy handling with a one touch loading tray.
Drainage spout to easily empty the solution from inside the tank.
Level window to monitor the amount of fluid in the tank.
Anti-spill protection mechanism for maximum safety.

How does it work
1. The Aero 360° Pure device works using 1 Aero 360° Pure Tab which lasts 1 to 3 months in a 20m2 room[2]
[2] depending on moisture level and room temperature
2. The Aero 360° Pure is effective in combating bad smells, and the development of dust mites and mould by absorbing excess moisture from the air.
3. This excess moisture is then converted into a salty solution which collects in the tank of the device.
The UniBond moisture absorber uses a natural process which does not need a source of energy [on batteries or electricity] and as a consequence creates no noise. This system is also environmentally friendly and convenient, as there are no consumed bags or cartridges to dispose of.

Improve the quality of the air in your home, with the help of the Aero 360° Pure moisture absorber and its 360° air circulation system.
Healthier Air
Which rooms can you use it in?
Living room, bathroom, bedroom, kitchen, caravan

Yeah they are great, I put one in my camper van over winter.
22nd Jan
Bargain
22nd Jan
I went into Morrisons in Reading, the large store in Whitley, and the staff informed me they don't sell them. So must be store specific.
22nd Jan

That's the one I was in. If you are at the tills facing the store they are down to the right at the end of one of the aisles facing you. On the bottom of the shelf. Staff probably don't even know what they are.
Edited by: "newmann" 22nd Jan
22nd Jan

Updated to say they are to the right not left sorry...go to the furthest till into the shop and then face the aisles and walk to your right they will be at one of the aisles on the bottom.