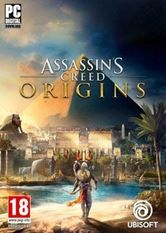 Assassin's Creed Odyssey
Let the Nile take you down to the origins of the Assassin’s Brotherhood in Ancient Egypt. Discover the secrets lurking below the pyramids and unravel their mysteries, fight your way through ancient factions and wildlife as you meet deep and interesting characters during multiple intertwining quests. There are many weapons of different characteristics and rarities to choose from, which will help you in the intense fights against mighty bosses to come: Assassin’s Creed Origins is a spectacular combination of the action and RPG genres and it is sure to challenge your skills in numerous ways.

ASSASSIN’S CREED® ORIGINS IS A NEW BEGINNING
Ancient Egypt, a land of majesty and intrigue, is disappearing in a ruthless fight for power. Unveil dark secrets and forgotten myths as you go back to the one founding moment: The Origins of the Assassin’s Brotherhood.

EMBRACE ACTION-RPG
Experience a completely new way to fight. Loot and use dozens of weapons with different characteristics and rarities. Explore deep progression mechanics and challenge your skills against unique and powerful bosses.
PostTweetShare Share with WhatsApp Share with Messenger
Community Updates
Voidu DealsVoidu Discount Codes
New Comment SubscribeSave for later
4 Comments
17th Sep
Credit @merb0786‌
17th Sep
Hmm, Odessey Gold, damn tempting. Or do I wait and use the epic voucher at the end of the month...
17th Sep

Thinking the voucher could be put forward to Tony Hawk's though, that looks the bomb!