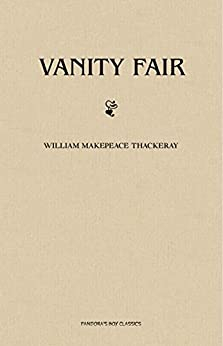 Description
Product Description
A deliciously satirical attack on a money-mad society, Vanity Fair, which first appeared in 1847, is an immensely moral novel, and an immensely witty one. Called in its subtitle A Novel Without a Hero, Vanity Fair has instead two heroines: the faithful, loyal Amelia Sedley and the beautiful and scheming social climber Becky Sharp. It also engages a huge cast of wonderful supporting characters as the novel spins from Miss Pinkerton’s academy for young ladies to affairs of love and war on the Continent to liaisons in the dazzling ballrooms of London. Thackeray’s forte is the bon mot and it is amply exercised in a novel filled with memorably wicked lines. Lengthy and leisurely in pace, the novel follows the adventures of Becky and Amelia as their fortunes rise and fall, creating a tale of both picaresque and risqué. Thackery mercilessly skewers his society, especially the upper class, poking fun at their shallow values and pointedly jabbing at their hypocritical morals. His weapons, however, are not fire and brimstone but an unerring eye for the absurd and a genius for observation of the foibles of his age. An enduring classic, this great novel is a brilliant study in duplicity and hypocrisy… and a mirror with which to view our own times.

The more I read Thackeray’s works the more certain I am that he stands alone — alone in his sagacity, alone in his truth, alone in his feeling… Thackeray is a Titan. —Charlotte Brontë
Re-reading “Vanity Fair”, one realises what a brilliant innovation this was in the English novel. —V. S. Pritchett
Thackeray’s harshest criticism of humanity is simply the point where ours commences. His perception of self-interest in every act is the ABC of modern psychology. —Louis Auchincloss
Becky Sharp is one of the best bad women in literature... She is deliciously bad in an era when women were not meant to be. —Donna Leon
I am not conscious of being in any way a disciple of his, unless it constitute discipleship to think him, as I suppose the majority of people with any intellect do, on the whole, the most powerful of living novelists. —George Eliot
Review
“Useful notes, compact serviceable text, affordable price.”—Dorice Elliot, Johns Hopkins
From the Author
William Thackeray was a British novelist and author. He is known for his satirical works, particularly Vanity Fair, a panoramic portrait of English society.
Book Description
‘I think I could be a good woman if I had five thousand a year’ Vanity Fair
About the Author
William Makepeace Thackeray (1811–1863) was an English novelist. He is famous for his satirical works, particularly Vanity Fair, a panoramic portrait of English society. Thackeray, an only child, was born in Calcutta, India, where his father was secretary to the Board of Revenue in the British East India Company. During the Victorian era Thackeray was ranked second only to Charles Dickens, but he is now much less widely read and is known almost exclusively for Vanity Fair, which has become a fixture in university courses, and has been repeatedly adapted for the cinema and television. His other works include The Book of Snobs, The Luck of Berry Lyndon, Men’s Wives and The History of Henry Esmond.
From the Inside Flap
Becky Sharp is a poor orphan when she first makes friends with the lovely Amelia Sedley at Miss Pinkerton’s Academy for Young Ladies. She may not have the natural advantages of her companion but she more than makes up for it with her wit, charm, deviousness and determination to make a success of herself whatever the cost. Vanity Fair is the story of Becky’s spectacular rise and fall as she gambles, manipulates and seduces her way through high society and the Napoleonic wars.
Synopsis
No one is better equipped in the struggle for wealth and worldly success than the alluring and ruthless Becky Sharp, who defies her impoverished background to clamber up the class ladder. Her sentimental companion Amelia, however, longs only for caddish soldier George. As the two heroines make their way through the tawdry glamour of Regency society, battles - military and domestic - are fought, fortunes made and lost. The one steadfast and honourable figure in this corrupt world is Dobbin with his devotion to Amelia, bringing pathos and depth to Thackeray’s gloriously satirical epic of love and social adventure.
Book Description
After first appearing as a serial in brilliant yellow covers, Vanity Fair, ‘a novel without a hero’, was published in full in 1848. A panoramic and biting satire, it was the first of William Makepeace Thackeray’s works to bear his own name. This edition includes his original illustrations and preface.
From the Back Cover
‘The best thing he ever wrote - sharp, brilliant, touching, clever and cruel, with an unforgettable heroine’ Joanna Trollope

Becky Sharp is a poor orphan when she first makes friends with the lovely Amelia Sedley at Miss Pinkerton’s Academy for Young Ladies. She may not have the natural advantages of her companion but she more than makes up for it with her wit, charm, deviousness and determination to make a success of herself whatever the cost. Vanity Fair is the story of Becky’s spectacular rise and fall as she gambles, manipulates and seduces her way through high society and the Napoleonic wars.