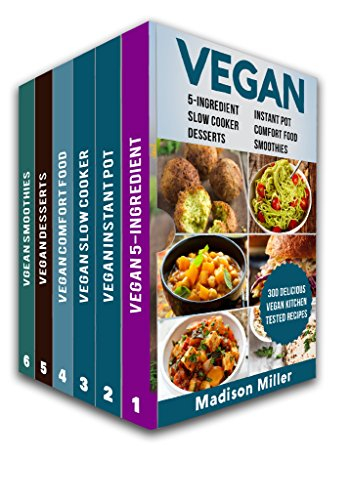 100% Vegan! Prepare delicious and healthy vegan meals with this collection of 300 Plant-based Recipes from appetizers to desserts. Extreme value with this box set of 6 books in 1 Vegan Cookbook

Vegan Smoothies Cookbook - Vol. 6
Get energized with plant-based smoothies all day long! Quick and easy to prepare, rich in nutrients, they are just the perfect complement to a healthy and satisfying plant-based eating lifestyle:
•Simple smoothie recipes such as the Banana Nut
•Superfood smoothies such as the Rainbow Smoothie
•Green smoothie recipes like the Morning Matcha
•Smoothie bowl recipes like the Ipanema Bowl
•Dessert smoothies like the Pumpkin Pie Jar

you are welcome
21st Feb
Looks like it has expired. Now £3.49, only free with Kindle Unlimited.