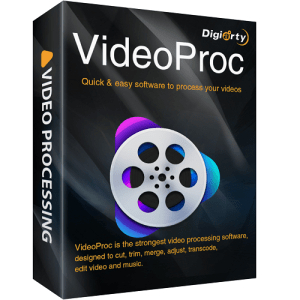 Videoproc (converter/ripper.downloader) - another chance to get V3.5 (rerun) now from SharewareOnSale

Converts video, rips DVD, downloads from sites (supports playlist) records screen + webcam. All in one tool and easy to use

Supports all GPU acceleration....
Nvidia from GT630 and up (probably means the Kepler versions, not the Fermi)
Intel HD2000 and up
AMD HD7700 and up.

The usual terms, limited time to install and no free update
PostTweetShare Share with WhatsApp Share with Messenger
Community Updates
New Comment Subscribe Save for later
7 Comments
12th Jan
Seems good, got my download got my code
12th Jan
Thanks, downloaded and heat added
12th Jan
I only got a 5 digit code in the mail - error 22
12th Jan
....how the world has changed, dont know a single person that uses this anymore.
13th Jan

Where'd you think the 'source', from the CONSTANT flow of video's via such (cough cough) 'steaming services' like ShowBox, Popcorn Time, IPTV, and so on, and so forth, were originally derived via, in the first place?, or ...

Someone, somewhere, is sitting there on an all but daily basis both coding + re-encoding such thing's in to begin with, don't you think?.

They alllllll come from somewhere at the end of the Day right?.

And that 'somewhere' is blatantly via source stuff's like the OP's above ...

So yeh, stuff's like this are being blatantly used every Day actually, but obviously not in the capacity to which you perhaps assumed it to be in, or something?. :-D

Though given (assumption being), it was originally designed with somewhat more 'cleaner means' usages, etc etc etc?.

In a similar vain to that of MP3 conversion software, if it wasn't for the likes of Napster from back in the Day, absolutely no one would have heard of MP3 encoding software like the likes of Audacity, to begin with? (and not would they have also cared for it either, altogether?, or whatever ... )

Are you confusing the BitsDuJour login password email with the VideoProc registration email?
14th Jan
Thanks . Glad I got this back. Last time the "update" only gave me the trial and I lost it. Different email and it's back up and running.