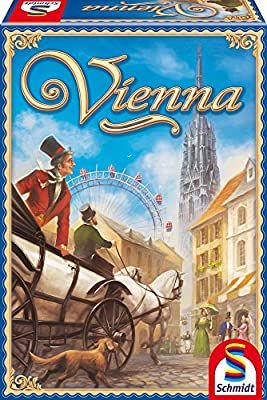 Schmidt Vienna Board Game £9.10 (+4.49 Non-prime) sold by docsmagic and fulfilled by Amazon

Cheapest yet I believe for this. There is one for £8ish on Marketplace but seller has relatively few reviews and on backorder til end of month.

6.5 on BGG however there are people who really enjoy this game so worth a look to decide for yourself.

Setting foot on the streets of 19th century Vienna for the first time you gaze in awe at the magnificent buildings of the old imperial city from your coach window. Overwhelmed by all the possibilities the metropolis has to offer, you begin to ask yourself all sorts of questions: Where should you place your dice so that you end up with the most victory points? Should you go after quick rewards? Or would you be better off looking for influential people in the heart of the city? Your fate will be determined not only by your own strategic decisions, but also by your rivals’ plans and the luck of the dice. At the end of the game, the player who plans his path with the more foresight and skill and places his dice wisest will prevail. Vienna offers an intriguing game idea in a wonderfully detailed setting. Let yourself be carried away into this fantastic nostalgic world! Playing time of around 30 minutes. Suitable for 3-5 players aged ten and above.
PostTweetShare Share with WhatsApp Share with Messenger
Community Updates
Amazon DealsAmazon discount code
New Comment Subscribe Save for later
17 Comments
17th Jan
Heat! Thank you
17th Jan

You are welcome
17th Jan
Heat. Already own it last time it was posted as deal around this price (prob posted by you). Still not played it though . Keep up the good work
17th Jan

Thanks, yes it as me but think that was ebay
17th Jan

It was Amazon. I don't use eBay too many cookies (wife does though).
17th Jan

It was Amazon. I don't use eBay too many cookies (wife does though).

I doubt Amazon uses any less invasive cookies than eBay. If you don't mind one, you may as well take advanatge of the offers at the other
17th Jan

It's more the spam/pop-ups than the cookies to be honest (being lazy in my initial reply). I always found each time I would go on eBay I would start getting pop-ups and adverts come up in eBay and also on other websites for eBay (this is going back 10years) where as Amazon I did not have this problem. Just put me off using it eBay. I'm the type of person who will not shop at a particular physical grocery/supermarket store anywhere in the UK because of very bad customer service I got from one - particularly as they were using a stupid company policy without any common sense. Customer service and experience is very important to me (others have different priorities). I might try eBay if I really need to using a phone app (or get the wife to), but for now, Amazon and a few other online stores cover my needs when shopping on the net.
Edited by: "sarb_singh1980" 17th Jan
17th Jan

Fair enough - I can see your point.

I also prefer to pay a little extra if customer service is better. Saving a few pennies doesn't make up for poor service.
17th Jan
Price updated to 9.10
17th Jan
Just got it for £7.68
17th Jan

On back order?
17th Jan
Nope arriving Tuesday
17th Jan
Great price heat added. I would have took a chance on this myself but sadly it's for 3-5 players.
17th Jan

You can play with 2 but not sure how good it is.

Nice one, when I checked last time it was 31st Jan for delivery. Don't think I'd be allowed to post that seller as only 300 feedback
20th Jan
Thank you for posting. I've bought from the other supplier now only £6.95 with 9 left in stock. I've noticed that both of these suppliers are based in Germany / Austria. Hopefully they will have more Games as similar sell off prices.
20th Jan

It would be rude not to for 6.95...
Docsmagic tends to have a few things but not heard of the other one before. Hears hoping their feedback increases a bit and I can start posting deals from them
Hope you enjoy.