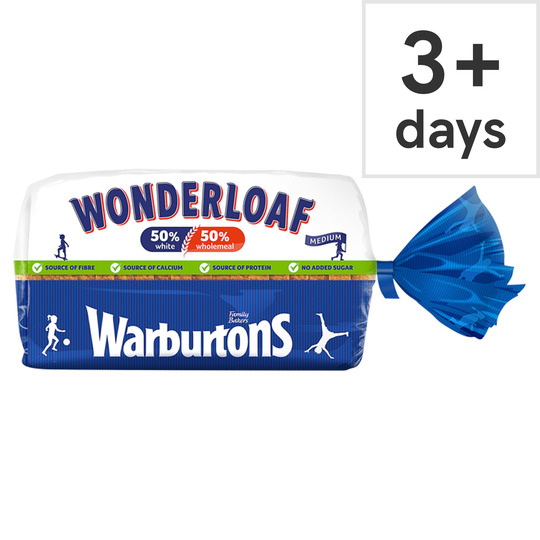 Good price for this loaf now live at Tesco

I can't support something that supports the inhumane slaughter of animals etc... Imo it should be banned and not forced on society etc.. At least it is labelled in this case so I can avoid it.
27th Jan

What animals do you think were slaughtered to make this bread?
27th Jan
Heat added. Good find OP. Anyone tried this bread? Just interested in what the difference is between this and usual Warburtons. Apart from the fantastic price these next few days. Haha.
27th Jan

What animals do you think were slaughtered to make this bread?

Haha, it's because the bread is 'halal' like almost all bread is. This bread is vegetarian which makes it both halal and kosher. No animals were injured, nor does certification mean the Warburtons are supporters of the halal slaughter of animals.
27th Jan

What animals do you think were slaughtered to make this bread?

It's totally unnecessary to promote halal. It's the whole principle. Indirectly they're supporting it. Tired of it all being forced on us. Why we have to accept it in a civilised country I'll never know.

Anyway, at least labeling it halal/kosher means I can avoid.
27th Jan

They're supporting an organisation that barbarically slaughters animals in a supposedly civilised Country. I will not support that.
27th Jan

Do you avoid Kosher food in the same way? Are you aware of the levels of suffering and distress in a normal abattoir? Can't speak for you, but in my limited experience, this is a race/anti-muslim issue as opposed to an animal welfare one.
27th Jan

Well, indirectly you're supporting it as well by taking in oxygen which is also halal. Please, by all means avoid that too.
27th Jan

Yes, I avoid Kosher too. They don't have to witness there mates throats being cut and then having there own throats cut moments later. Then the brain can remain conscious for upto seven minutes later. Religion/race shouldn't come into it at all. It is a totally unnecessary way for an animal to die when stunning them vegitates them and makes the slaughter far more humane etc. I'm not condoning the mistreatment of animals either. That's a different issue. I buy all my meat and eggs from my local farm and will do all I can to avoid halal/kosher.
27th Jan

Touchy
27th Jan
Heat
27th Jan
The absolute brainlessness here is amazing! Halal means permissible so in the case of bread it means there are no animal products in it! If you don’t want halal bread Get a bread maker and make your own by adding a bit of ham in it coz that’s the only way you’ll make it non halal you nonces!!!
27th Jan

Now i know, I will buy Warburtons.
27th Jan

Maybe you should use your brain and educate yourself. It's most certainly NOT the most humane way. Do you think that's how they kill people in Switzerland when people chose euthanasia? They can remain conscious for several minutes later, Gasping for breath etc...and where do you think they process the pain? Seeing others bleeding out etc.. Isn't exactly a nice way to go when there are far more humane methods, Animals are smart enough to know about there impending death. Stunning them instantly turns them into a cabbage. They become brain dead. Once that happens they can be slaughtered any way you want. There are far more humane methods available. Bullet to the head, Gradually starve them of oxygen etc.. You might believe that slicing a throat is the most humane method but you are very wrong.
27th Jan

Lmao they feel more pain when they get stunned as opposed to having their throat cut. And I was making the point that even if the brain is still alive, which it isnt, then they wouldn't feel the pain
27th Jan

The brain is still alive for several minutes after, that's the whole point. I guarantee they can feel it sliced just as you would yours.

Besides they can still opt to slice there throats after. Stunning doesn't taint the meat in any way.
Edited by: ".MUFC." 27th Jan
27th Jan

Yep they can feel it sliced but it's so quick that the pain would only last for about a second. The brain isnt alive after that.
27th Jan

You idiot.... I have seen how they die it's slow until the blood drains out of them and basically collapses to the floor.Get your facts right.
27th Jan

Obviously the blood drains out of them slowly.... After the throat is cut, the animal loses consciousness due to drop in blood pressure and no longer feel pain till they die
27th Jan

Yes it is, that's the whole point.

No it really isnt..
27th Jan
Ermm why are you talking about animal slaughter on a thread about Bread? Go release your Islamaphobia with Tommy n Katie Hatekins! I’ll have a bucket of KFC as long as the chickens were stunned the fact their dead and I ate them is Minor....
28th Jan

I'm not sure which humane method you're talking about! Read the below facts.

According to a report done by Rebecca Smith of VIVA, a vegan campaigning group fighting to save animals, the stunning techniques used in UK abattoirs include:

The Captive Bolt Pistol (CBP) and concussion stunningThis type of stunning is widely used for all farmed animals. Unconsciousness is caused either by penetration of the skull which causes brain damage or by causing a concussive blow to the brain without penetration. It is called ‘captive’ since the bolt is shot out of the barrel but remains attached to the pistol. The disadvantages of CBP stunning:In order to be effective, CBP stunning must be performed by highly trained personnel. Correct cartridge strengths must also be used. If this is not the case or if the pistol is not positioned correctly, the animal will have to endure the pain of being shot incorrectly and will then have to be shot again or be knifed while conscious. In a 1996 report, the Scientific Committee of the European Commission said that, “In 5 to 10% of cattle, captive bolt stunning is not applied correctly.” VIVA translates this percentage into 230,000 cattle in the UK being stunned incorrectly each year.A practice known as pithing, which often followed the CBP shot and was practiced by the majority of cattle slaughter houses, increased the risk of BSE also known as Mad Cow disease by allowing infected brain matter to reach other parts of the animal’s body. Pithing was banned in the UK in 2002.
Electric Head-Only Stunning
Cattle, sheep, goats and ostriches are all stunned using this method. The technique involves the application of a pair of electric tongs on either side of the animal’s head. An electric current is then passed through the brain and this supposedly leads to the temporary loss of consciousness. The Royal Society for the Prevention of Cruelty to Animals (RSPCA) say that, “There is increasing scientific evidence that some animals stunned electrically using tongs regain consciousness before they die from loss of blood.” The reasons behind this are either an inefficient electric current being passed through the animals’ brain during stunning or the animals begin to regain consciousness if the time interval between stunning and sticking exceeds a period of 20 seconds. VIVA explains this saying that the stun caused by the electric head-only technique lasts between 20 and 40 seconds whereas the interval between stunning and knifing is as high as 70 seconds for sheep. This means that there are around 5 million sheep that regain consciousness after being electrically stunned before they die of blood loss.Research done at Bristol University has also shown that after an electric stun, sheep may not be able to feel pain, they do, however, experience periods of full awareness. Furthermore, there is no evidence that the loss of consciousness is immediate, and some people like neurophysiologist Dr. Harold Hilman believe that stunning is extremely painful, pointing out that the electrocution of prisoners is used as a torture method in some countries. The animals cannot express this pain by crying out or by moving since the massive electric current paralyzes them.
28th Jan
I like the way the words 'inhumane' and 'slaughter' are used in the same sentence. Do you know how stupid it sounds. Go to a slaughter house, any one. Then seriously tell me there is a 'humane' way to slaughter a living creature. As soon as one is killed, they all sense it and start panicking and shaking and bumping into one another because they are sh*t scared. But, of course, you can explain to them that 1 method is better than another because it's more 'humane'.