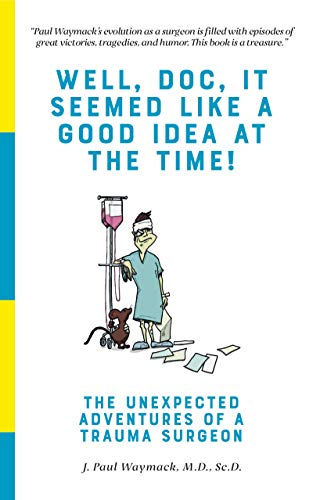 Well, Doc, It Seemed Like a Good Idea At The Time!: The Unexpected Adventures of a Trauma Surgeon Kindle - Free @ Amazon

In 1976, Paul Waymack began chronicling his experience as a third-year medical student, and for the next 20 years, he kept a journal filled with crazy stories of unusual patients, maladies, and international espionage.

Some of them, he’s the first to admit, seem unbelievable--like chasing a naked patient around the ER parking lot in the middle of the night . . . or constructing a horse sling for a 700-pound patient . . . or treating a patient who swallowed a cigarette lighter . . . or serving as a major in the U.S. Army Medical Corps during the Cold War, on orders of the president and with a KGB agent hot on his tail in the Soviet Union. In his wildest dreams, Dr. Waymack could never have imagined most of what he experienced as a doctor, but these stories are all true. He couldn’t have made them up if he tried.
PostTweetShare Share with WhatsApp Share with Messenger
Community Updates
6 Comments
Post a comment