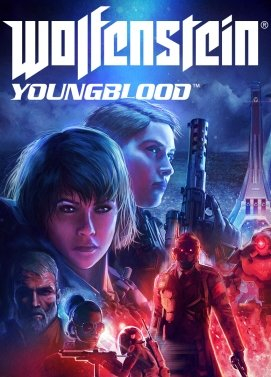 Set, as were the games prior to this one, in an alternate reality, just after the Second World War in a time when the Nazis won the war and have taken over most of the Western world. They are fought ably by the Resistance who make great strides in reducing their numbers and sphere of influence, with special help from William ‘BJ’ Blazkowicz who has featured in every game in the series since 1993’s Wolfenstein 3D.

In this game though, Blazkowicz has dared to relax. Much of the world is freed from the pernicious Nazi influence and BJ has married Anya and they have twin daughters, Jessica and Sophia. They have not fully relaxed, and have trained their daughters in combat and self-defence.

And then, one day in 1980, Blazkowicz disappears without a trace, and the girls, along with their friend, Abby, discover a hidden room in which a map indicates that he has gone off to Nazi-occupied France to meet with the Resistance. The girls, worrying about their dad, ‘acquire’ (that means steal) a helicopter and some armour suits, and head off in pursuit.

They meet up with Juju who is the leader of the Resistance, who confirms she met up with Blazkowicz but that she has no idea about his current whereabouts.

However, further investigation by the girls reveals the real villain of the story and they find their way to their father, releasing him from his temporary prison. He sends them onwards to catch the villains and prevent their plan for unleashing the Fourth Reich, while he reveals something that has been gnawing at him since he killed Hitler in the 60s (an earlier game).

Doomsday is Upon Us
When Blazkowicz saw off Hitler, saving the world from Nazism, or so he though, he unwittingly triggered a Doomsday device which has slowly been counting down ever since. It is now close to detonation unless Blazkowicz can find it, work out how to deactivate it, and do so without succumbing to the Nazi guards who are certain to be vigilant for any attempt at sabotage…

William BJ Blazkowicz: soldier, spy, hero, BJ works tirelessly over decades to eradicate the Nazi threat to the civilised world. He is a large, muscular man, standing six foot three, and sporting dark blond hair and blue eyesArthur: Arthur is BJ’s son and appeared in the backstory of the original plot line. He does not feature in the games, but his own sonWilliam Blazkowicz jnr: appears in the Commander Keen games as the eponymous character, playing under the pseudonym of Billy Blaze. Commander Keen himself, went on to have a son of his ownNameless son of Commander Keen: This man might be nameless, but he is certainly not anonymous, starring in his own series of games under the respective names of Doom Slayer, Doom Guy and even just simply DoomWolfenstein: Youngblood for PC is available for purchase on Instant Gaming for a fraction of its retail price. You will receive an official key and be able to play the game in seconds. Play smart. Pay less.
PostTweetShare Share with WhatsApp Share with Messenger
Community Updates
Instant Gaming Deals
New Comment Subscribe Save for later
14 Comments
16th Jan
Platform?
16th Jan

Pretty sure it’s Bethesda.net seeing as I’ve just bought it myself just to check out the RTX update..
16th Jan
A very disappointing game, I'm a big wolfenstein fan and this is pants.
16th Jan

A very disappointing game, I'm a big wolfenstein fan and this is pants.

(Oops - EDITED) NOT Steam. *Just Denuvo + Bethesda.net plus for added measure microtransactions/currency to lock stuff behind. I've not checked because I don't have a Bethesda account, but hopefully it's *only* as bad as the recent Far Cry games with the optional currency to unlock stuff. At least in those games you can earn enough in-game money to just buy the weapons/vehicles/skins. you never have to go near the real-money option. I'm getting too old for this game...well, not this game specifically It's not received good reviews. Shame, 'cos the others were brilliant; all the way back to Wolfenstein 3D.
Edited by: "nickclarkson" 16th Jan
16th Jan
I've setup Philippines steam account. Can only assume I can't use it
16th Jan

It’s the Bethesda launcher, not Steam.

If you scroll down to the “How do I activate” section it gives instructions for the Bethesda launcher:

Also at the top of the page it says it’s a key for the “official website” instead of steam.
16th Jan

Watched the Digital Foundry vid on this last night and thought the same. Might be a not very good game but seems to be a showcase for RTX and VRS.
16th Jan

You buy a game just so you can ''check out the RTX update''.So now your willing to buy a bad game?
Edited by: "chaank" 16th Jan
16th Jan

Oh I do apologise for spending my hard earned £6.89 on whatever tickles my fancy wether it be a good game or not.
16th Jan
The price appears to of increased...
16th Jan

Well then, apology excepted, let this be a lesson learned. Jokes aside, the game is god awful.
Edited by: "chaank" 16th Jan
20th Jan
yeah tried this the other day, After 10 mins deleted it, not like the other games at all