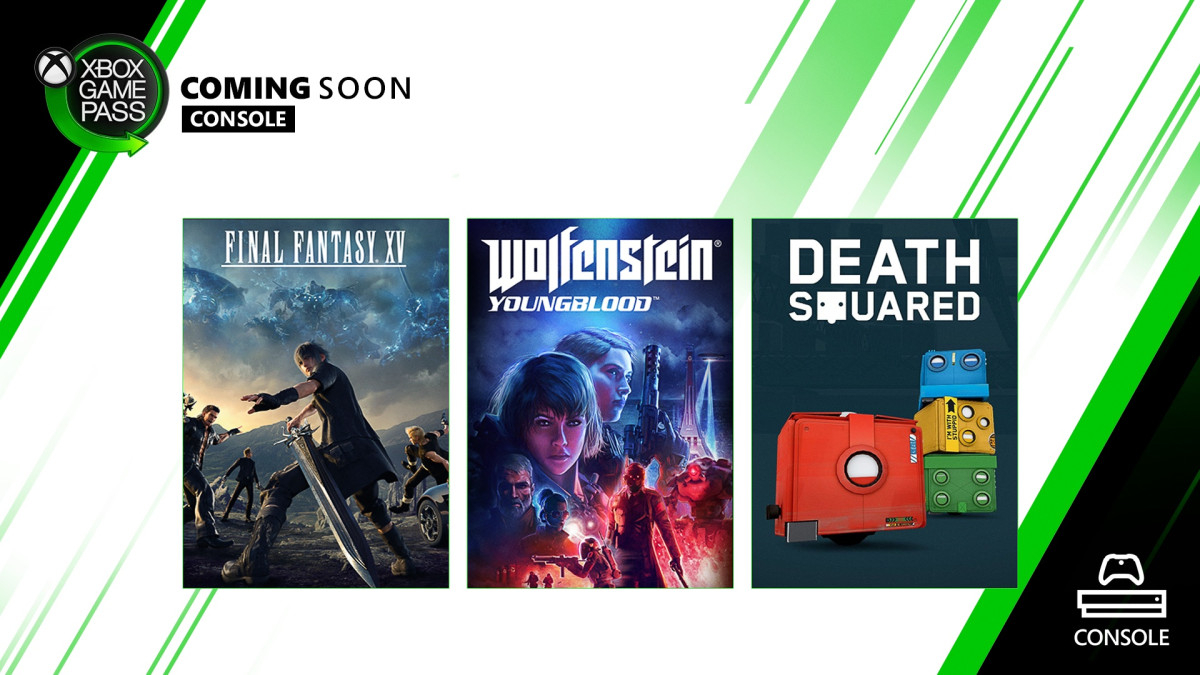 We teased on Twitter that February was going to be a really, really good month, and I am here to confirm its really good status. We’ve got games, we’ve got betas, we’ve got Xbox Game Pass Quests, and we’ve even got a leap day in the month to play. Let’s jump in.

Final Fantasy XV
Featuring action heavy combat, innovative gameplay, and immersive graphics that push the limits of modern hardware, Final Fantasy XV is an awe-inspiring tale that transports audiences into its vivid imagining of a fantasy world based in reality. Experience this acclaimed installment in the legendary series that has defined storytelling and adventure in video games for decades.

Wolfenstein: Youngblood
With the most open-ended Wolfenstein experience to date, explore a new base of operations located deep in the heart of the Paris catacombs and plan how and when to attack and dismantle the Nazi regime. Set 19 years after the events of Wolfenstein II, BJ Blazkowicz’s twin daughters, Jess and Soph Blazkowicz — after years of training from their battle-hardened father — are forced into action. Team up with a friend to level up, explore, and complete missions to unlock abilities that compliment your playstyle.

Death Squared (ID@Xbox)
Prove your teamwork skills in Death Squared as you solve puzzles together or die trying. Guide robots to color-coded goals while avoiding deadly traps and hazards. Players will need close observation and communication to keep each other alive and discover a solution together in this co-op puzzle game for one, two, or four players – best enjoyed with your friends and family with – featuring both a single-player, co-op campaign, and party mode.

In Case You Missed It

Celebrate Valentine’s Day weekend by joining us for the Bleeding Edge closed beta! From February 14 through 16, grab your 4v4 team and tear it up in an electrifying online brawler where every fighter comes mechanically enhanced for mayhem!

Quest hunters! We just rolled out a new update for Xbox Game Pass Quests that will give you more quests to complete with daily, weekly, and monthly quests. Get all the details here in our dedicated Xbox Wire post here!

Reminder that Xbox Game Pass members have a member discount for up to 10% off of add-ons and paid DLC for games in our library. We have a whole collection of Xbox Game Pass deals, including these below coming soon!

Dead Cells DLC – The Bad Seed (Console and PC)
Harvest a few souls with your new scythe! Play through The Arboretum, The Swamp, and The Heart of the Swamp.

Metro Exodus DLC – Sam’s Story (Console and PC)
In this sandbox-survival expansion, forge Sam’s path on his journey through Vladivostok on his mission to find his way home to the USA, where he hopes to find his family – alive.

We’re always updating our library of games, and while it’s sad to see some go, it‘s a good reminder to get some game time now Don’t forget that if you want to keep playing, you can use your member discount to save up to 20% off to purchase these titles leaving soon:

Reminder that you can make installing games easier by getting the Xbox Game Pass mobile app, that way you can install games remotely and have them queued and ready to go when you’re home. And if you’re looking for something to make you laugh, or maybe just a sensible chuckle, you can follow us on Twitter and Instagram.
PostTweetShare Share with WhatsApp Share with Messenger
Community Updates