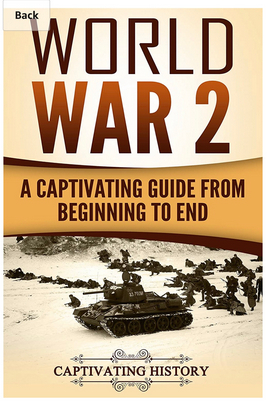 Description
Explore How World War 2 Began, the Aftermath and the Events in Between

The Second World War was one of the most traumatic events in human history. Across the world, existing conflicts became connected, entangling nations in a vast web of violence. It was fought on land, sea, and air, touching every inhabited continent. Over 55 million people died, some of them combatants, some civilians caught up in the violence, and some murdered by their own governments.

It was the war that unleashed the Holocaust and the atomic bomb upon the world. But it was also a war that featured acts of courage and self-sacrifice on every side.

Some of the topics covered in this book include:

The Rising Tide
From Poland to the Fall of France
Britain’s Darkest Hour
Barbarossa Unleashed
Early Operations in Africa and the Mediterranean
A Day Which Will Live in Infamy
Germany’s Eastern Offensives
Guadalcanal and the War in Asia
Operation Torch and the Taking of North Africa
The Tide Turns in Eastern Europe
Advancing on Japan
The Invasion of Italy
From D-Day to the Bulge
The Fall of Germany
The Fall of Japan
And a Great Deal More that You don’t Want to Miss out on!
PostTweetShare Share with WhatsApp Share with Messenger
Community Updates
Amazon DealsAmazon discount code
New Comment SubscribeSave for later
1 Comment
6th Jun
Thank you.