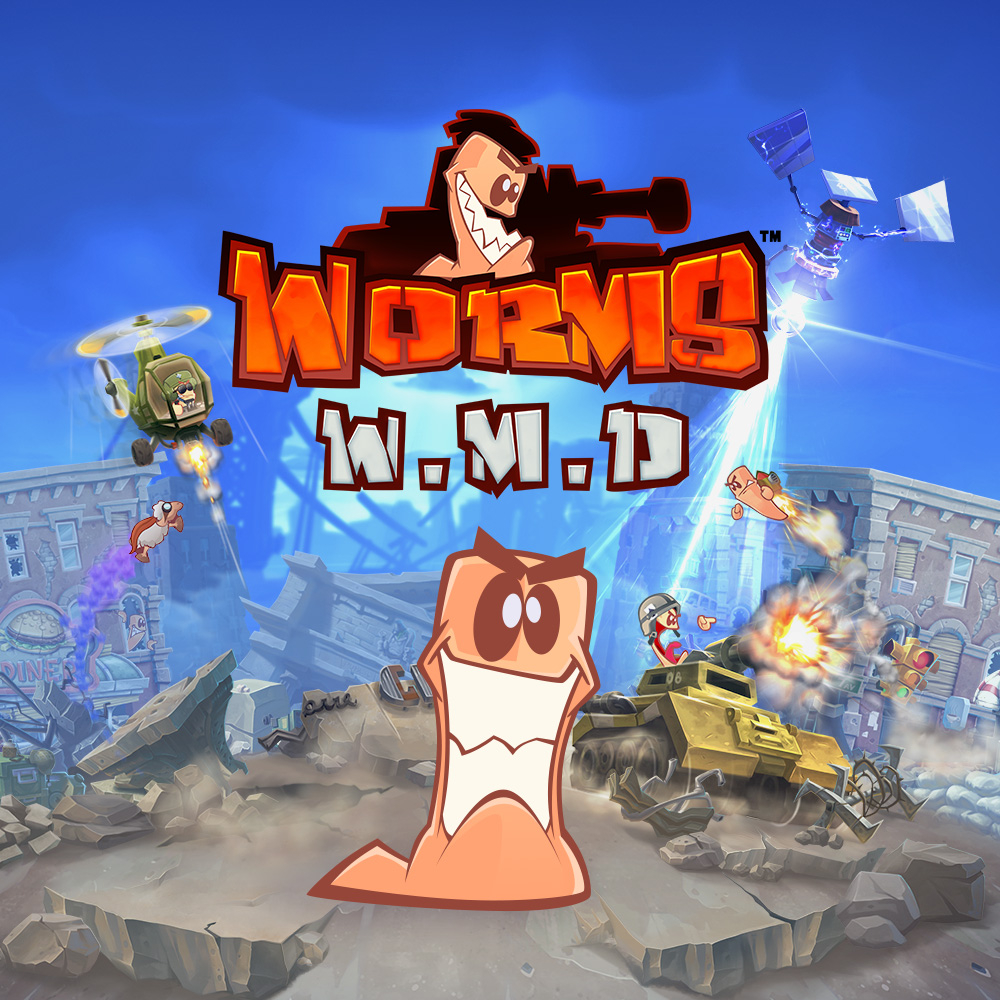 The Worms are back in their most destructive game yet. With a gorgeous, hand-drawn 2D look, a full arsenal of weapons, crafting, vehicles and buildings, Worms W.M.D is the best Worms experience ever!

In Worms W.M.D for Nintendo Switch, players will be able to feel the full power of all the game’s campaign missions, levels, customisations and updates, including Liberation and the fan-favourite Forts Mode whether at home or on the go.

Worms W.M.D for Nintendo Switch includes support for single Joy-Con play, local wireless multiplayer* as well as local and online** multiplayer in hilarious all-out tactical worm warfare. So, wherever you are, grab your Concrete Donkeys, un-pin your Holy-Hand Grenades, and re-cape your Super Sheep as you prepare to rain hell on upon your enemies with Worms at its chaotic best!

Wonderfully 2DThe best implementation of the Worms formula yet, now with a brand new worm, and gorgeous digitally-painted 2D artwork.

VehiclesWorm warfare gets serious with the introduction of vehicles for the first time in the series. Dominate the landscape in warfare-ready tanks, take to the skies to unleash hell from from above in helicopters and more!

BuildingsGain the tactical advantage by keeping your worms’ heads down and hiding out in a building, protecting them from direct attacks!

CraftingNo more waiting around while your opponents take their turns! Grab the crafting crates that drop from the sky during games to make fiendishly upgraded versions of items such as the Electric Sheep, the Bazooka Pie and the Holy Mine Grenade to unleash on your enemies!

Classic Worms physics and gameplayOur brand new engine recreates the feel of the fan-favourite entrants in the series and sees the reintroduction of the much loved Classic Ninja Rope.

New and classic weaponsOver 80 weapons and utilities at your fingertips, including many returning classics and a slew of new additions such as the Dodgy Phone Battery, the Unwanted Present and the OMG strike.

Mounted gunsA range of different gun types are placed around the landscape, allowing your warmongering worms to do even more damage!

Hilarious single-player plus online and local multiplayer warfareWorms W.M.D comes locked and loaded with a warchest of Training Missions, Campaign Missions and Challenges for the solo player. Train up then head online to create havoc in multiplayer modes including ranked play, with room for up to six players on each map!

And coming first to Nintendo Switch, a whole megaton more!

Don't forget you'll also get 34p worth of gold points to spend on a future purchase.
Nintendo eShop DealsNintendo eShop discount code
New Comment SubscribeSave for later
12 Comments
27th Aug
Why cold?
27th Aug
Voted hot, managed to pick up a physical copy before it started selling for £100+
27th Aug
I used to play Worms on the PC many, many years ago. Is this Switch version any good?
27th Aug

Possibly because it is quite often on sale at this price.

Looking at Deku Deals I'd estimate that on average it's on sale one week in four? And since last November always on sale at this price

Given this, and the discount has only improved over time, if you're not desperate for it then might be worth holding it and seeing if it goes even lower in future sales.
27th Aug

Dunno. Its like Lemmings, its a great game but it seems more like a mouse game?
28th Aug

Ok Thanks, I'll hold out till it drops
4th Sep

It's nothing like lemmings, have you ever played this game it was on the mega drive on a joypad before that we had it on the amiga, worms is completely diffrent, don't make a stupid observation when you don't know the difference just cause you dunno, what dunno u no..... When there definitely one thing you should know and thats don't vote cold when you don't know the difference..... You have the brain of a small pin
4th Sep
This deal has now expired
4th Sep
Yep played Lemmings on SMS and Worms on SMS with control pads. Its widely recognised they are similar genre games. If you feel otherwise fine, does it really require a full out rant and random assault on someone... I don't know. Why do you assume I voted cold by the way (I didn't for the record and my response to another persons question suggested nothing of the kind). You seem very passionate at the prospect of a cold vote for an account that has 0 deals posted. Strange attitude if you don't mind me saying.

Lemming and worms are two very diffrent games so don't know how you could make a Comparison and your reasoning was.. Dunno... I'm passionate becuase if your going to give some one a reason for voting it cold you could come up with something better than dunno..... Lemmings is you stop the lemmings dying that's the entire game summed up but with worms it's completely diffrent you clearly never played it becuase when you can attack your mates with a kamakazi sheep in multiplayer that's not lemmings and if it's not lemmings..... It's not lemmings..... I played it on the 90s in my teens same as I played lemming with a mouse, I played worms with a mouse.. Then it was on the consoles and you took turns eachs waiting for your go....
5th Sep

Just to correct myself i meant Worms SMD. Worms is a great game and the real issue with it on Switch is that the physical release as I recall was not released in UK and only made in small numbers. I have no further response to your inexplicable and repeated ranting. For peaces sake lets just say your entirely right, im entirely wrong, and im in complete agreement with you, and now we can all move on. I will also avoid commenting on any mouse deals just to play it safe.
5th Sep
I thought you where getting worms mixed with a game called cannon fodder first, you've given a perfect reason as why you voted it cold and I respect that reason I just got suddenly protective over my childhood games lmao sorry to come across the way I did its just sometimes how i get sometimes... Also never insult sensible soccer lol..... Just joking I know I came across aggressive and I'm sorry for that I get to animated, hope all is good with you and your family given what the world has brought us this year