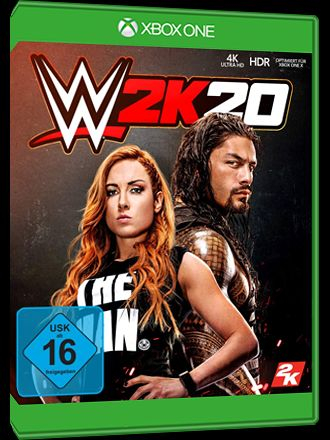 So....2K invites players to Step Inside the ring with WWE 2K20, available since October 22.

Your favorite WWE Superstars, Legends, Hall of Famers and NXT’s best will join the festivities and celebrate the evolution of the WWE 2K franchise!

WWE 2K20 will feature key gameplay improvements, streamlined controls, and the most fun and creatively expansive entry in the franchise to date.

Because this is a buggy broken mess.
23 Comments
16th Feb
Just buy 2k19 instead
16th Feb

Because this is a buggy broken mess.
16th Feb
Do not buy this game
16th Feb

It's just a far better game technically and less bug ridden. It is the last true wwe game by the original developers, whereas this was developed in house by incompetent devs. Wwe 2k20 is one of, if not the worst game of 2019.
16th Feb

That is more than a little harsh, the new devs by all accounts picked it up half way through and we’re not given the time to complete the project.
Calling the devs incompetent just makes you look like a d*ck

They pretty much publicly slammed Yukes during the lead up to release and then released this game in the state it was in. They spent time creating fantasy ideas (which Yukes refused to make, because it’s ridiculous in a wrestling game) instead of making sure they actually could make a working product.

So yeah, not using your time correctly and appropriately, while slagging off the previous developer, means they acted in an incompetent manner. I’d say @omisnad hit the nail on the head. The game is still broken 4 months after release after numerous patches. Not having time is not the issue here...

16th Feb
I'll be honest I haven't played a wrestling game since 2k15 so didn't actually know about the bugs and stuff but just read up on it and it's soooo apparent in videos and stuff. So my apologies and if am honest I wouldn't pay for this either lol so again my apologies
16th Feb
This will be a games with gold soon

Heat added though, as it's the best price right now
Edited by: "Turret-Buddy" 16th Feb
16th Feb
Believer in best price so heat. But personally.... If this was the deluxe full edition.... I'd say honest heat. But for a broken standard game, don't do it. 2k have released two broken games now and something needs to be done about it. Comments above is true. 2k19 is bug free and you can download new characters. Only say the deluxe is worth it, due to the silly dlc maps, rings, skins that probably can make it feel a bit different.
16th Feb
Op you don't need to apologise you posted a deal and at this price its worth a punt but it is what it is, and yeah I agree with others its probably better to purchase the previous game or if you have a wrestling game itch I hear fire pro wrestling on the PS4 is a good game but completely different wwe 2k.
16th Feb

Gosh, really ?!?! Calling someone incompetent is harsh and makes me look like a d*ck ... lucky I dont say what I think of most publishers nowadays (including 2K, especially as a switch owner).
16th Feb

Well yeah it does, because you weren’t bashing the publisher who made the decision to push it, you were bashing the developers who were trying their best to get something playable in impossible circumstances
16th Feb
I’ve heated for cheapest it’s been but seriously avoid this game.

i paid 12.99 for last years deluxe and it’s far better than this by all accounts. I’m on a few old wrestling game forums and this did not go down well at all. Stick to last years until Yukes release Chris Jericho’s legends cruise of wrestling Or some such...
Edited by: "joanddan7" 16th Feb
16th Feb

Only one person looking like a dlck around here 🏻
16th Feb

I guess I can retract it, since looking into it, I admit I was wrong. I thought it was the joint devs and 2k that forced Yukes out mid cycle, rather than Yukes that jumped. However, in this case it looks like I cannot even blame 2k either. I seems that its WWE themselves who state 2k must release a new game annually.
Edited by: "omisnad" 16th Feb
16th Feb

So it’s ok for Visual Concepts to bash Yukes, but not ok for paying customers to bash Visual Concepts? Ok. It’s Yukes you should have sympathy for. Their devs used to sleep in the office and work 20 hour days to make sure the game was in the quality it was. Then they get let go and bashed by the people who couldn’t release one single working wrestling game on their own thus far. (And they have had two chances. 2K18 is still on sale and broken on Switch)

Your excuse is not even remotely based on fact. VC have been working with this franchise since 2014. They had plenty of time to learn the engine. (Which was what they were supposed to have been doing as it was well known that Yukes would be let go after a period of time). They wasted their time creating silly fantasy dlcs that nobody asked for, or wanted, and now, 4 months after release and numerous updates, the game is still broken. They haven’t apologised for what they released. All they do is keep pushing their product and DLC.
16th Feb

Yeah, that's what I thought and my retraction above is based off a interview with VC ... so not at all biased. Either way , I've already wasted enough of my Sunday afternoon over this.
16th Feb

No need to apologise. You were just trying to help people.

Yeah, they’re lying through their teeth. Yuke’s account is very different. Anyway, you’re right. I need to go and do something better with my Sunday afternoon.
16th Feb
I still believe they made it buggy on purpose. Look at how much attention it got.
17th Feb

If only it was that easy. Make crap products make big profits
17th Feb
So even the latest patch from a couple of weeks ago didn't fix the bugs? If so, that is really bad. I bought Fire Pro Wrestling World as it's currently on offer on PS Store - that's a lot of fun