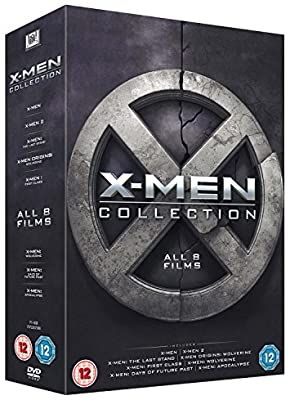 Product Description
Collection of eight feature-length action adventures based on the Marvel comic strip. In 'X-Men' (2000), mutants Professor Charles Xavier (Patrick Stewart) and Magneto (Ian McKellen) are former friends, but look set to become mortal enemies when fascist US senator Robert Frank Kelly (Bruce Davison) calls for the registration of all those with abnormal powers. While telepath Xavier, who runs an altruistic academy for superhumans he calls his X-Men, wishes to enlighten non-mutants and break down the prejudices which divide them, Magneto believes that the only solution is for the mutants to take over. Logan, aka Wolverine (Hugh Jackman), an aggressive loner with an admantium skeleton and the ability to heal his body of any wound, and teenager Rogue (Anna Paquin), who can absorb the life force of others simply by touching them, are selected by Xavier to join his academy, but it isn't long before Magneto's followers are attempting to capture them so that they can assist in his plan for world domination. In the sequel, 'X-Men 2' (2003), Xavier, Wolverine and the X-Men find themselves in the firing line after a failed assassination attempt on the president of the United States points the finger at the academy. It was in fact the mysterious teleporter Nightwalker (Alan Cumming) who ordered the attempt, and, in an attempt to clear their names, the X-Men are led into a trap set by the evil William Stryker (Brian Cox), a mysterious scientist apparently working for the government. As it soon becomes evident that Stryker's agenda is to destroy all mutants, the X-Men need to call in the help of many of their old friends and foes, including Magneto, if they are to stop Stryker and his evil plan. In the third film, 'X-Men: The Last Stand' (2006), the mutants are given the option of giving up their powers and becoming human after a private laboratory supported by the government finds a way to use the DNA of a powerful boy to correct the mutants. However, Magneto opposes this and decides to join a force to fight against the government and kill the mutant boy. Meanwhile, Jean Grey (Famke Janssen) resurrects, uncontrolled by Xavier, and with the personality of the powerful Dark Phoenix. She kills her former love, Scott (James Marsden), as well as friend and mentor Xavier, and allies herself to the evil forces of Magneto, making them, together, almost invincible. The fourth film in the franchise, 'X-Men: Origins - Wolverine' (2009), is a prequel to the other three films. Jackman reprises his role as Wolverine, who, some 20 years before the action of 'X-Men', is seeking revenge on his half-brother Victor Creed (Liev Schreiber) for the death of his girlfriend, and eventually signs up to the ominous Weapon X programme, an experiment run by Stryker (Danny Huston) that sees Wolverine's bone structure change dramatically. 'X-Men: First Class' (2011) is the fifth film in the series and charts the beginning of the saga, following Professor X (James McAvoy) and Magneto (Michael Fassbender) through their formative years in the 1960s as they come to terms with their newfound superpowers. Initially close friends who work together to fight against evil, the two men are driven apart by a conflict of opinion that ultimately leads to the eternal war between Magneto's Brotherhood and Professor X's X-Men. 'The Wolverine' (2013) follows on from the events of 'X-Men: The Last Stand' as Logan finds himself vulnerable, alone and at his lowest point, after losing his connections with the outside world. Drawn to modern-day Japan by the gratitude of a wealthy industrialist from his past who secretly covets his healing powers, Logan soon finds himself up against the deadly charms of a femme fatale known as The Viper (Svetlana Khodchenkova) whilst having to confront samurai steel and lethal ninjas as his destiny leads him towards a winner-takes-all battle with his ultimate foe, The Silver Samurai (Will Yun Lee). 'X-Men: Days of Future Past' (2014) sees a journey through time as the X-Men travel between past and present in an attempt to save the world from the brink of disaster. When the survivors of the battle in 'X-Men: The Last Stand', led by Magneto (McKellen), Professor X (Stewart) and Storm (Halle Berry), discover that total annihilation now awaits humans and mutants alike, they send the ageless Wolverine back in time to try and change the course of events. In the past, Wolverine must team up with the younger incarnations of Charles Xavier (McAvoy), Magneto (Fassbender) and Mystique (Jennifer Lawrence), to avert disaster. Will he succeed? Finally, 'X-Men: Apocalypse' (2016) sees the introduction of the character En Sabah Nur (Oscar Isaac), known as Apocalypse, who is worshipped as the first and most powerful mutant to have ever lived. When he is awakened after several thousands of years at rest, Apocalypse sees what the modern world has become and sets about correcting and cleansing humanity to create a better world for mutants to live in, recruiting Magneto (Fassbender) onto his team. Hearing about the imminent attack, Professor X (McAvoy) teams up with Raven (Lawrence) and Beast (Nicholas Hoult) to try to save humanity.

Is there 4k HDR version of these ?

Original trilogy yes and others individually.i haven't seen a boxset but it may exist.
12th Jan
I don't know why this is expired.
12th Jan

This is still available. Shouldn't be expired.

Sorry.people.i had expired it because the price went up to £12.99.just seen the messages and rechecked and now back down so unexpired it.thanks.
12th Jan
Still £4.99 - but only one left (just checked). I was tempted, but resisted. 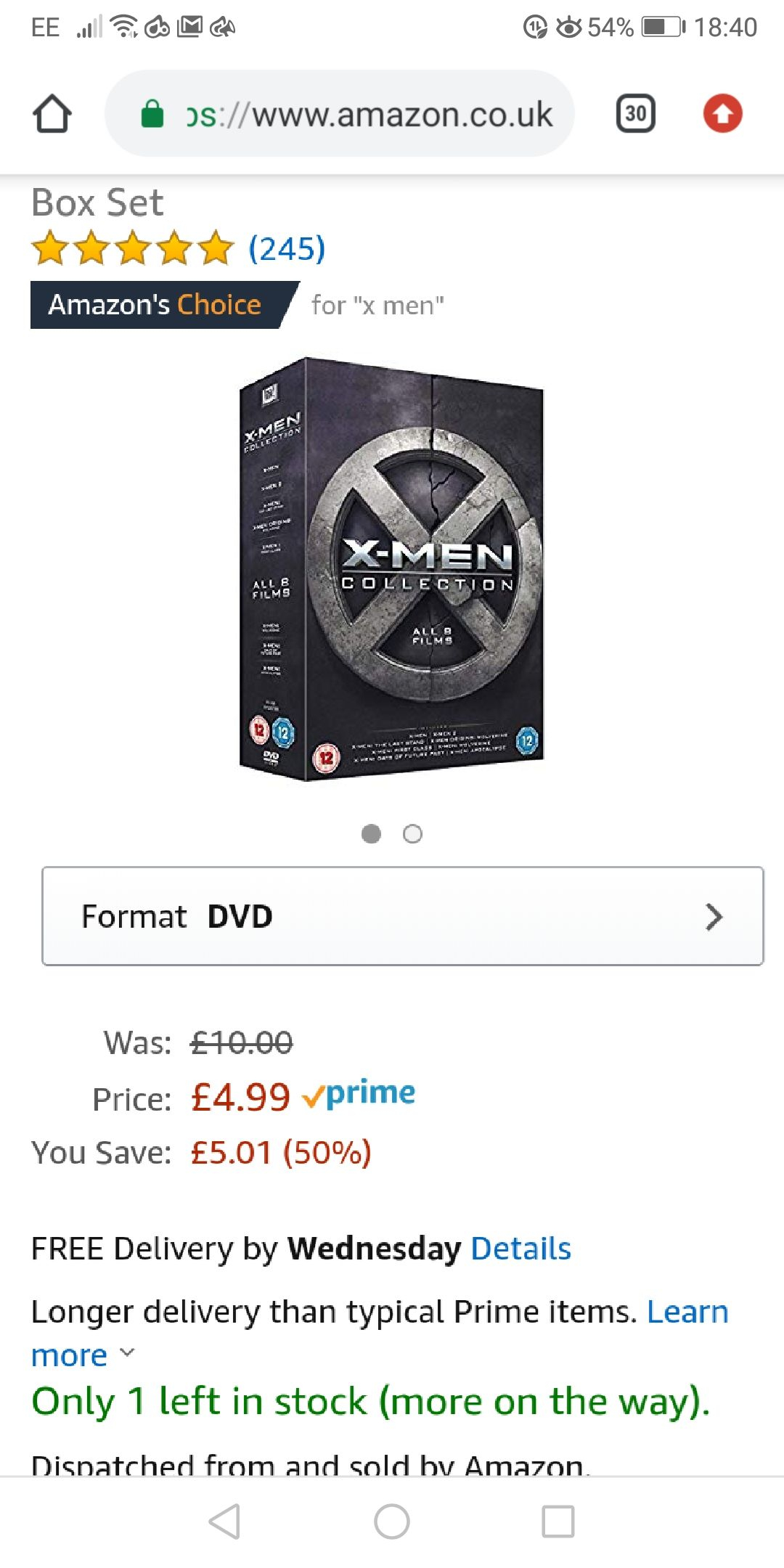