Spotted this 4 film set over on Music Magpie, which when added to basket drops to £2.69 delivered, that's less than 70p per film 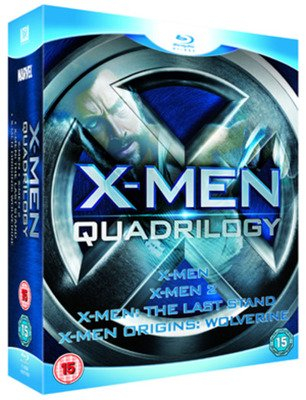 Four feature-length action adventures based on the Marvel comic strip. In 'X-Men' (2000), mutants Charles Xavier (Patrick Stewart) and Magneto (Ian McKellen) are former friends, but look set to become mortal enemies when fascist US senator Robert Frank Kelly calls for the registration of all humans with abnormal powers. While telepath Xavier, who runs an altruistic academy for superhuman 'X-Men', wishes to enlighten non-mutants and break down the prejudices which divide them, Magneto believes that the only solution is for the mutants to take over. Wolverine (Hugh Jackman) - an aggressive loner with an admantium skeleton and the ability to heal his body of any wound - and teenager Rogue (Anna Paquin), who can absorb the life force of others simply by touching them, are selected by Xavier to join his academy, but it isn't long before Magneto's followers are attempting to capture them so that they can assist in his plan for world domination. In the sequel, 'X-Men 2' (2003), Professor Charles Xavier, Wolverine and the X-Men find themselves in the firing line after a failed assassination attempt on the President points the finger at the school. It was in fact the mysterious teleporter Nightwalker (Alan Cumming) who ordered it, and, in an attempt to clear their names, the X-Men are led into a trap set by the evil William Stryker (Brian Cox), a mysterious scientist apparently working for the government. As it soon becomes evident that Stryker's agenda is to destroy all mutants, the X-Men need to call in the help of many of their old friends and foes, including Magneto, if they are to stop him. In the third film, 'X-Men: The Last Stand' (2006), the mutants are given the option of giving up their powers and becoming human after a private laboratory supported by the government finds a way to use the DNA of a powerful boy to correct the mutants. However, Magneto opposes and decides to join a force to fight against the government and kill the mutant boy. Meanwhile, Jean Grey (Famke Janssen) resurrects, uncontrolled by Xavier, and with the personality of the powerful Dark Phoenix. She destroys Cyclops (James Marsden) and Xavier and allies herself to the evil forces of Magneto, making them almost invincible. The fourth film in the franchise, 'X-Men: Origins - Wolverine' (2009) is a prequel to the other three films. Hugh Jackman reprises his role as Wolverine, who, some 20 years before the action of the original 'X-Men' movie, is seeking revenge on his half-brother Victor Creed (Liev Schreiber) for the death of his girlfriend, and eventually signs up to the ominous Weapon X programme.
PostTweetShare Share with WhatsApp Share with Messenger
Community Updates
Music Magpie DealsMusic Magpie Discount Codes
New Comment SubscribeSave for later
5 Comments
25th Mar
Good way to pass the time. Heat from me. Thanks for the post
25th Mar
Fantastic. Cheers, @Mark‌
25th Mar
Just going to say they are on Disney + if you have that
25th Mar

Yeah but when the world ends and the internet goes down Disney + won't work
25th Mar
They have taken the 10% away.