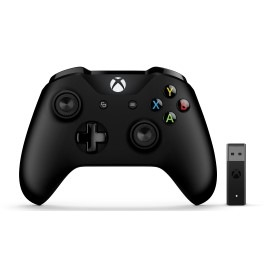 This is the new Bluetooth and 3.5mm XBox One controller with 2xAA batteries (it comes with 2x Alkaline batteries, you can also use 2xAA rechargeables, e.g. Eneloop / Ikea, or the XBox One Play & Charge kit, which is a custom battery pack that fits in the 2xAA space and allows the battery pack to be charged in the controller via the USB cable) . It works with phones and computers via Bluetooth, but for more than one controller it is recommended to use the Wireless Adapter for better latency and connection reliablity.

I already have the same controller (no XBox) that I use with my PC gaming laptop, and occasionally with my Android phone. I've been after a second controller so that I can play local multiplayer games either on my laptop or HTPC, so I've been looking out for a deal on this bundle for a while.

Very.co.uk had a cheaper deal, but they are sold out, so this is the next cheapest deal I could find.

Free delivery, and 1% TopCashback tracked (on the pre-VAT price of £34.99).
PostTweetShare Share with WhatsApp Share with Messenger
Community Updates
Microsoft (Microsoft Store) DealsMicrosoft (Microsoft Store) promo code
If you click through or buy, retailers may pay hotukdeals some money, but this never affects which deals get posted. Find more info in our FAQs and About Us page.
New Comment Subscribe Save for later
20 Comments
30th Nov 2019
I’d be interested to know where this is cheaper at the minute as I need one.
30th Nov 2019
I got one from Very last week for £32.99. Sold out now though. Wish I'd had bought another
30th Nov 2019

Was yesterday for 32.99 at Amazon for whole day. 42 is regular price. 53 is overpriced.
30th Nov 2019
As a posted on the other thread dont be too hasty to vote against the bundle with the wireless adapter. Bluetooth is OK for getting up and running and for pairing with phones for xcloud but with PC its very glitchy and doesnt support headsets.

£40 is maybe the "regular price" of the controller by itself. The wireless adapter costs £16-£20 by itself.

This deal is the bundle of the controller AND wireless adapter that allows you to connect up to 8 controllers to one PC.
30th Nov 2019
I assume people (wrongly) think the dongle is a regular bluetooth dongle and therefore pointless to get one if they have BT on their PC - but every wireless system is different and the xbox wireless interface is better for controllers I would say
Edited by: "jwsg" 30th Nov 2019
30th Nov 2019
Do I need to buy the 'play and charge' kit or some disposable batteries to actually use this wirelessly?
1st Dec 2019
Thats news to me - unless its says comes with play and charge kit you need AAs.
Normal AA rechargables are fine - it seems strange as other brands have built in but you can just pop two fresh AAs in and get going rather than waiting to recharge the controller.
4th Dec 2019
I just bought a Xbox one S with one controller
DOI need that bundle for a second controller or Bluetooth dongle is not required?
4th Dec 2019

No idea what you are on about. The only Xbox controller that has an internal battery is the new Elite Series 2. You will need either two AA (LR6) batteries a set of which is included or if you want to recharge by the cable you need a Play & Charge kit battery pack. Personally I use Panasonic Eneloop rechargeable AA batteries and they work great.
6th Dec 2019
ah sorry, I got my first controller ages ago and it must have come with the play and charge kit, or perhaps I just bought it separately at the same time, so I've always remembered it as having a built in rechargeable battery. I just opened the back cover (of my first controller, not the one in this deal) and it's got a removable xbox rechargeable battery that looks like two AA batteries in a case...

for the other question, you only need the wireless adapter to play on PC if you want to play games with 2-8 controllers/players

OR if your PC doesn't have Bluetooth and you'd rather have the better performance/reliability compared to Bluetooth
7th Dec 2019
Considering getting this vs. getting the one with the cable adapter. Worth the extra tenner for one less cable?
7th Dec 2019

You can connect multiple controllers to this adapter.
But you also need batteries for this.
8th Dec 2019

It's only really useful for connecting multiple controllers to a PC
8th Dec 2019
Just to clarify things, if you need to use a headset on your xbox controller while playing on PC, you will have to get this adapter as without it, sound is only routed to speakers and not to the 3.5mm jack on the controller.
9th Dec 2019

Was it the old or new style controller from very?
29th Dec 2019
Sorry for posting on an old deal

This says built in rechargeable battery. I've searched till the cows come home but can only find Elite Series 2 that comes with rechargeable built in battery.

All the rest use AA and optional charge pack far as I can tell?
30th Dec 2019

You are absolutely correct. I think I must have got my first XBox One controller bundled with the Play & Charge kit, and have always used it that way since day one, so quickly forgot that it comes stock with 2xAA alkaline batteries. I'll probably just use some AA Eneloop rechargeables for my new one, since I have them, and charge the batteries externally, and keep an eye out for a deal on the Play & Charge kit, since it's just a bit more convenient to charge via USB and not have to charge batteries externally.

Updated the original description for posterity.