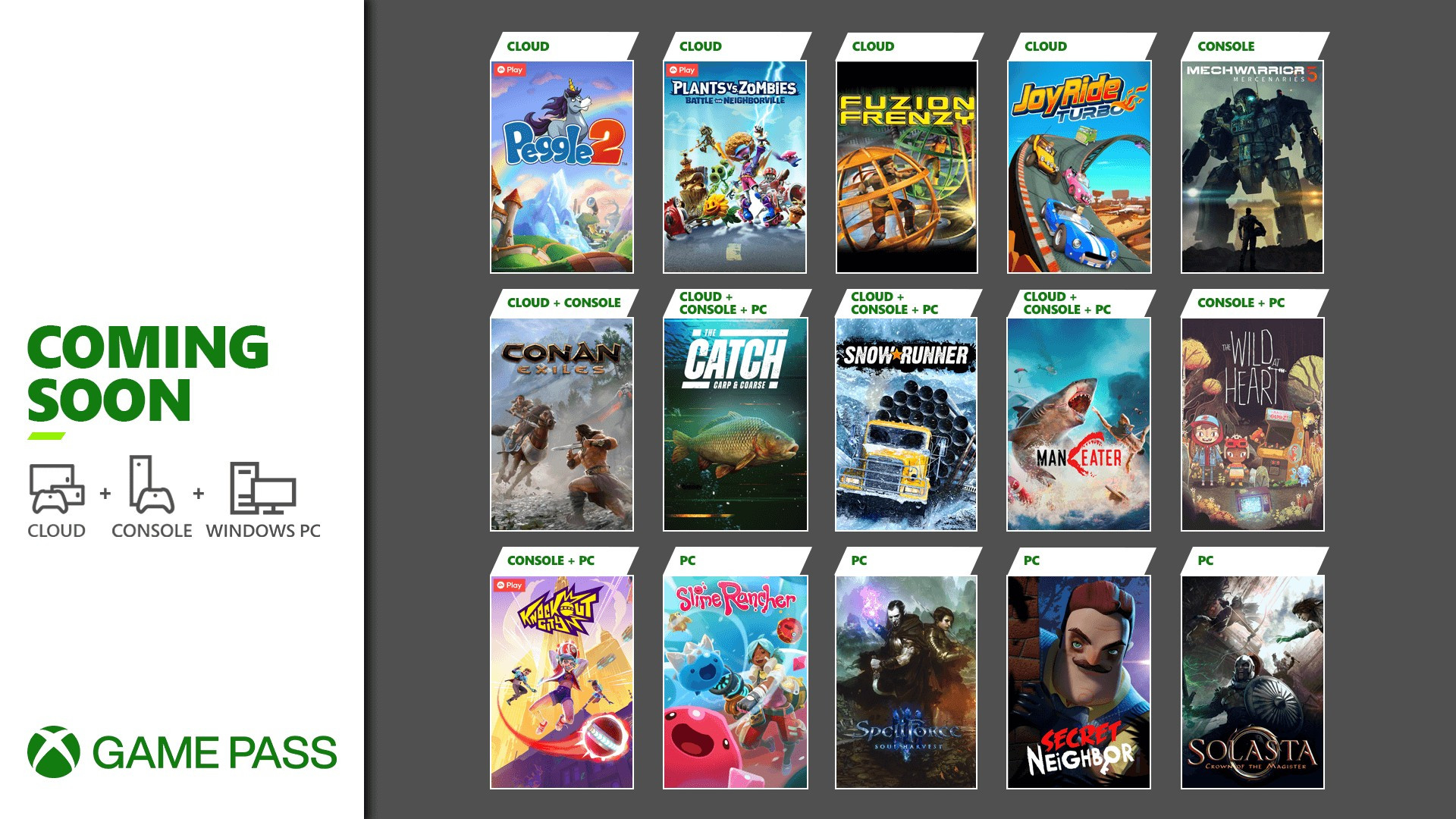 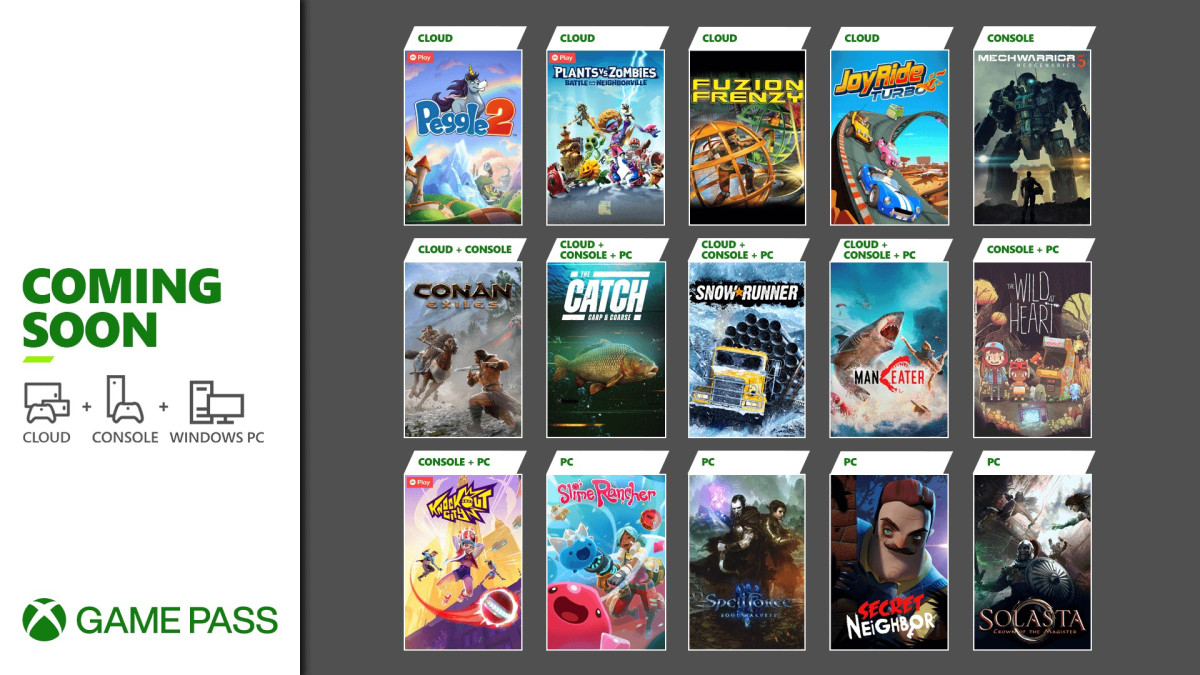 SnowRunner puts you in the driver’s seat of powerful vehicles as you conquer extreme open environments with the most advanced terrain simulation ever. Drive over 40 vehicles from brands such as Ford, Chevrolet, and Freightliner as you leave your mark on an untamed open world

Peggle 2 (Cloud) EA Play – May 20
Peggle 2 is a magical game full of bouncing balls, magical pegs, and bricks made of pure compressed joy! Test your luck and skill by clearing pegs, bashing bricks, and timing your shots just right to achieve extreme fever!

The Wild at Heart (Console and PC) ID@Xbox – May 20
Day one with Xbox Game Pass! The Wild at Heart is a whimsical story centered around two children that escape to a fantastical land filled with magical creatures to befriend and an oddball order of guardians who’ve lost their way. Explore a beautiful, handcrafted world full of charming puzzles and deep secrets. Welcome to the Deep Woods.

The Catch: Carp & Coarse Fishing (Cloud, Console, and PC) – May 21
With 35 species to hunt, you’ll have to work up your strategy and tactics to catch every boss fish. To succeed you’ll need to choose your angling spot, based on time of day, weather conditions and perfect equipment, before casting out to battle and catch these elusive creatures.

Knockout City (Console and PC) EA Play – May 21
Day one with Xbox Game Pass for PC and Ultimate with EA Play!Calling all brawlers! Team up and duke it out in Knockout City, where epic dodgeball battlers settle the score in team-based multiplayer matches. Throw, catch, pass, dodge, and tackle your way to dodgeball dominance!

Maneater (Cloud, Console, and PC) ID@Xbox – May 25
Maneater is a single-player action RPG, set in the Gulf Coast’s unforgiving waters. Fight to survive in the open ocean, swamps, and rivers with danger lurking at every depth. Your only tools are your wits, your jaws, and an uncanny ability to evolve as you feed.

Conan Exiles (Cloud and Console) ID@Xbox – May 27 – Optimized for Series X|S on May 27
Alone and naked in a hostile land, your first task is simply to survive. Then you must build a stronghold and gather your allies. And from there, you can set out to dominate your enemies. Conan Exiles is a single and multiplayer survival game, set in a massive open-world sandbox with mythical beasts, perilous dungeons, and the freedom to play whichever way you like.

Fuzion Frenzy (Cloud) – May 27
The Xbox original Fuzion Frenzy combines the continuous, frenetic action of a futuristic street sport with the action-packed fun of mini-games set in a dynamic 3-D urban environment. Six arenas and more than 45 mini-games provide plenty of competitive fun for up to four players.

Joy Ride Turbo (Cloud) – May 27
Joy Ride Turbo is an arcade racer delivering precision handling, speed, and crazy stunt mayhem! In the Stunt Park, show off your skills or explore and find collectibles that unlock cars, giving you an edge for faster races and death-defying stunts.

MechWarrior 5: Mercenaries (Console) ID@Xbox – May 27
Welcome to the year 3015! It’s a hell of a time to be alive. Humanity has colonized thousands of star systems, war is everywhere, and the battlefields of the future are dominated by hulking machines known as BattleMechs. It’s dangerous work for the elite pilots of these metal monstrosities, but that’s why a power-hungry MechWarrior like you came here, right? If you’re looking to blast, wreck, stomp – and profit – step inside!

Slime Rancher (PC) ID@Xbox – May 27
Slime Rancher is the tale of Beatrix LeBeau, a plucky, young rancher who sets out for a life a thousand light years away from Earth on the ‘Far, Far Range’ where she tries her hand at making a living wrangling slimes. With a can-do attitude, plenty of grit, and her trusty vacpack, Beatrix attempts to stake a claim, amass a fortune, and avoid the continual peril that looms from the rolling, jiggling avalanche of slimes around every corner!

Solasta: Crown of the Magister (PC) ID@Xbox – May 27
Discover the shattered world of Solasta. Explore ruins and dungeons for legendary treasures, learn the truth of an age-old cataclysm, and stop it from happening again. Tailor your squad to your preferred strategy and maximize your party’s abilities in classic tabletop RPG tradition. The choice is yours.