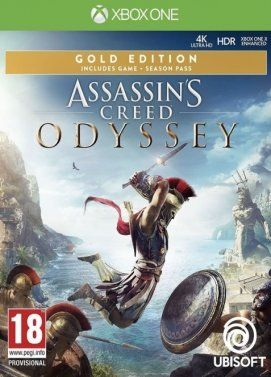 Enhance your Assassin's Creed Odyssey experience with the Gold Edition including:

The Season Pass: Play new narrative arcs in Assassin's Creed Odyssey with the Season Pass, giving you access to recurring major story content
Also Includes Assassin's Creed III Remastered & Assassin's Creed Liberation Remastered
From outcast to living legend, embark on an odyssey to uncover the secrets of your past and change the fate of Ancient Greece. Experience seamless naval exploration, and brand new ways to fight, in a world that is constantly evolving and reacting as you play.

Write your own legendary Odyssey and live epic adventures in a world where every choice matters. Sentenced to death by your family, embark on an epic journey from outcast mercenary to legendary Greek hero, and uncover the truth about your past. Forge your path through a war-torn world shaped by gods and men, where mountains and sea collide. Meet Ancient Greece’s famous figures and interact with them during a pivotal point in history that shaped western civilization.

Assassin’s Creed Odyssey brings player choice to the forefront through innovations never-before-seen in Assassin’s Creed as you choose the hero you want to become and change the world around you. Through the relationships you build with colorful characters & the decisions you make along your Odyssey, it is you who is in control of your destiny. Customize your equipment and master new special abilities, tailoring your hero’s skillset to your play style. Fight your way across Greece, engaging in visceral battles both on land and at sea, to become a true Hero of legend.

PostTweetShare Share with WhatsApp Share with Messenger
Community Updates
Instant Gaming Deals
New Comment Subscribe Save for later
24 Comments
25th Apr
HEAT!!!! 🔥💥🔥💥
25th Apr
Nice deal already have this on PS4 but was half tempted by the Medusa edition 365games.co.uk/xbo…ame
25th Apr
I've played this game for over 60 hours and still can't get enough of it.
25th Apr

Last one if you are tempted I would have expected that edition to come with everything but upon looking, you don't get the season pass
25th Apr

I've only just finished dusting off the collection already owned and I'm rapidly running out of floor space too
25th Apr
So tempting! Hot
25th Apr
Absolute steal!
25th Apr
Do they not sell the season pass at a good price for those of us foolish enough to buy the base game a year ago and still not play it?
Edited by: "Xtranathor" 25th Apr
25th Apr
This is cheaper than the season pass alone! I'm currently playing through the base game and really enjoying it, perfect lockdown game. My save should be compatible if I upgrade to this right?
25th Apr
Finished it this morning, completionists beware - 136 hours to get all the achievements! The DLC mainly sucks and the last 40-50 hours is mind-numbing. A real low point for the series.
25th Apr

I thought the DLC was fantastic, a lot of grinding in Atlantis but I thought it was great
25th Apr

Legacy of the first blade was fantastic? Hmmmm. Ep 1 and 3 of Atlantis were ok but Hades was awful.
Edited by: "NickW82" 25th Apr
25th Apr
Haven’t played any AC games before, is this game worth getting?
25th Apr

Haven’t played any AC games before, is this game worth getting?

I HIGHLY recommend you buy the Ezio Collection first. Start from there. Then play Black Flag (or skip this one if you want), then Origins and then Odyssey.

I know that's a lot of games (6 of them) but if you start from the beginning you'll appreciate the story behind AC a lot more. IMO the Ezio trilogy was the best and I far prefer Origins to Odyssey.
25th Apr

I would love to start from the beginning and if anything play them all one after the other but it’s just time! Very limited to how much I can play. Do you have to play the previous ones before playing origins or odyssey? So you’d say origins is better than odyssey?
25th Apr

I liked the characters in it and the quests but something that should’ve been in the main story, love the setting of Atlantis though
25th Apr

I mean, no, but the lore of the Abstergo/assassin stuff makes you appreciate those parts of the games a lot more (for modern day parts, although they’re not as frequently shown as much as the older games).

You could literally play any game at any point for the historical part of the game as each game has it’s own story arc set in a different time, however you might not understand the “Isu” parts that get implemented into the story as much as someone who started the games from the beginning.

I personally preferred Odyssey to Origins mostly for the character, story and combat, felt more engaging, however Origins has the best world out of all the AC games. That’s just my opinion though. I also like how Odyssey lets you select a response although it’s more like an illusion of choice if anything.
Edited by: "felton92" 25th Apr
25th Apr
I just want seasson pass alone, any cheap season pass on xbox?
25th Apr

Precisely, cut 50 hours out of the base game and incorporate the DLC into the game with Atlantis being the ending. Hate it when the DLC just feels like a part of the main game they withheld and charged for. It was the same with Origins
Edited by: "NickW82" 25th Apr
25th Apr

Sorry for the late reply, you don't have to play the previous ones, but they just let you know about the lore etc.

And yeah I definitely prefer Origins to Odyssey! Not to give any spoilers, but Odyssey really made no sense within the world of AC. Still a fun game though.
26th Apr

Aye. I have that problem with the first blade dlc rather than the Atlantis one though. Atlantis has a different vibe to it that works as dlc, mostly because it’s got it’s own world
26th Apr

I'm on the hades part now myself. Let's just say I've dusted off a couple of other games rather than persevere. It's terrible. I've done the intro to the dlc and quickly got bored
26th Apr

I was raving about this game, I got to the DLC after 90 hours and i’ve now lost all motivation to complete it. It does get mind-numbing, especially if you did what I did and binged it 6-10 hours a day everyday in lockdown
4th May
Out of stock