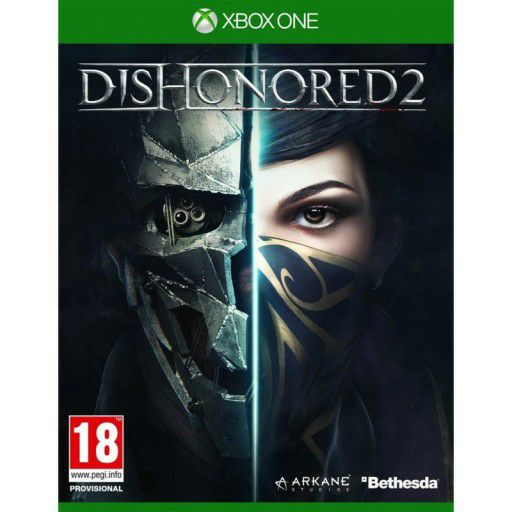 [Xbox One] Dishonoured 2/The Evil Within Ltd. Edn./Dishonord Definitive Edn. For £3.95 Each @ The Game Collection

DESCRIPTION
Reprise your role as a supernatural assassin in Dishonored 2, the highly anticipated follow up to Arkane Studios’ 2012 Game of the Year!

DISHONORED - DEFINITIVE EDITIONDESCRIPTION
Arkane Studios’ 2012 Game of the Year, Dishonored, and all of its additional content - Dunwall City Trials, The Knife of Dunwall, The Brigmore Witches and Void Walker’s Arsenal – comes to Xbox One in Dishonored Definitive Edition!
Experience Dishonored plus all of its additional content on the new console systems for the first time, complete with enhanced graphics that take full advantage of the powerful hardware of this generation.
Dishonored
Dishonored - the recipient of over 100 Game of the Year awards - is an immersive first-person action game that casts you as a supernatural assassin driven by revenge. With Dishonored’s flexible combat system, creatively eliminate your targets as you combine the supernatural abilities, weapons and unusual gadgets at your disposal. Pursue your enemies under the cover of darkness or ruthlessly attack them head on with weapons drawn. The outcome of each mission plays out based on the choices you make.
The Knife of Dunwall
In The Knife of Dunwall, take on the role of Daud, the legendary assassin who killed the Empress. After assassinating the Empress, and forever changing the fate of Dunwall, you embark on a search for redemption. Gain access to Daud’s new weapons, gadgets and supernatural abilities as you traverse through parts of Dunwall yet unseen, including the city’s whaling center, Rothwild Slaughterhouse, and the heavily guarded Legal District.
The Brigmore Witches
Continue your journey as the legendary assassin, Daud, in The Brigmore Witches. This conclusion to Daud’s story will put you at odds with warring gang factions and the dangerous Brigmore witch coven. Journey through undiscovered locales within Dunwall, including Drapers Ward and the Brigmore Manor, where you will be met with supernatural forces that test the limits of your new weapons and abilities.
Dunwall City Trials
In Dunwall City Trials, experience Dishonored’s flexible combat system, stealth gameplay, and distinct settings in a whole new way as you make your way through 10 distinct maps that feature a variety of challenges. Put your stealth, combat and mobility skills to the test as you clear demanding objectives, unlock new achievements and secrets, and climb up the global online leaderboards.
Void Walker’s Arsenal
With the Void Walker’s Arsenal add-on pack, gain access to four content bundles previously available only through pre-ordering Dishonored. These bundles offer unique character bonuses, additional bone charm slots and more
MIRROR'S EDGE CATALYST
DESCRIPTION
Follow Faith, a daring free runner, as she fights for freedom in the city of Glass. What appears to be an elegant, high-tech city on the outside, has a terrible secret hidden within. Explore every corner from the highest beautifully lit rooftops to the dark and gritty tunnels below. The city is huge, free to explore and Faith is at the center of it all. Through the first-person perspective, combine her fluid movement and advanced combat with the city’s surroundings to master the environment and uncover the conspiracy. This is Mirror’s Edge for this generation, raising the bar in action-adventure games.
The City of Glass
Through fluid, first-person movement and combat, experience the most immersive action adventure game of this generation.
First-Person Action - Get up close with your enemies. Use your freedom of movement and martial arts combat in conjunction with the environment to experience fluid first-person action unlike any other.
Explore the City of Glass - Roam the beautiful, high-tech city at your own pace, and unlock its many different districts. Run free and explore, from the highest, glass made skyscrapers to the hidden underground tunnels.
Witness the Rise of Faith - Brought up on her own on the margin of the totalitarian society, Faith found refuge amongst an outsider group called the Runners. Learn about her origin story, and take part in her journey as she stands up against oppression and becomes the catalyst that can change the City of Glass forever.
The evil Within Limited EditionDESCRIPTION
The Evil Within for Xbox One is the new face of pure survival horror.
Developed by Shinji Mikami - creator of the seminal Resident Evil series - and the talented team at Tango Gameworks, The Evil Within forces you to come face to face with twisted creatures and experience true terror.

The Evil Within introduces Detective Sebastian Castellanos. Investigating the scene of a gruesome mass murder, he will encounter a mysterious and powerful force, one that will slaughter his fellow officers and leave him unconscious. When Sebastian awakens, he finds himself in a deranged world where hideous creatures wander among the dead. Fighting for survival, Sebastian embarks on a frightening journey to unravel what’s behind this evil force.

Facing unimaginable terror, you'll experience a disturbing reality as you try to break free from warped machinations that could only exist in the most horrifying worlds, all heightened by cutting edge lighting and animation made possible by a customised version of the id Tech 5 engine.
Game Features
PostTweetShare Share with WhatsApp Share with Messenger
Community Updates
The Game Collection DealsThe Game Collection promo code
New Comment Subscribe Save for later
2 Comments
11th Mar
Incredible deal, espeially for the Dishonoreds.
A few other games for £3.95 too.
12th Mar
Yep saw this the other day and chipped in on Dishononred 1 & 2, Evil Within 1 & 2 (£4.95), TitanFall 2 (£2.95) & State of Mind (£6.95) - A must play if you like Quantic Dream type games!

Tip - If you buy a bunch, buy all but the cheapest one, then purchase the cheapest one and utilise all your reward points for further savings
Edited by: "Mickey_Money" 12th Mar