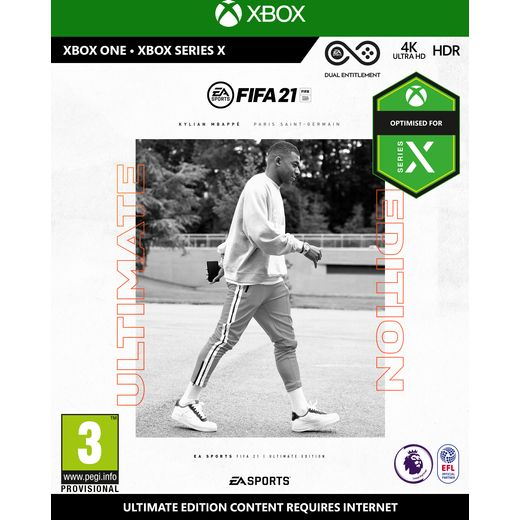 alilweirdtablet
0Get deal*Get deal*
21°
Xbox One FIFA 21: Ultimate Edition now £16.99 +£3.99 delivery @ very
£20.98
Posted 9th Jun 2021
FIFA 21: Ultimate Edition plays on Xbox Series X and Xbox OneBuy the disc version of FIFA 21 for Xbox One and get the upgraded version for Xbox Series X / S for FREE if you buy a new console (disc version only). You must retain game disc. Offer expires on release on FIFA 22. All progress in FIFA Ultimate Team and Volta Football will be carried over.

WIN AS ONE in EA SPORTS™ FIFA 21 on Xbox One with new ways to team up and express yourself on the streets and in the stadium. Powered by Frostbite™, FIFA 21 raises the game with fresh features that let you enjoy even bigger victories together in VOLTA FOOTBALL and FIFA Ultimate Team™, feel a new level of gameplay realism that rewards you for your creativity and control, manage every moment in Career Mode, and experience unrivalled authenticity that gives you the most true-to-life experience of The World’s Game.

Agile Dribbling - In football, 1v1 situations can open up goal-scoring opportunities that determine the course of a match.

Positioning Personality - Being in the right place at the right time to receive the ball, step in for a crucial interception, or make a goal-saving tackle differentiates the world’s best players from the rest. In FIFA 21, Positioning Personality elevates footballers’ in-game intelligence to match their real world understanding of space and time, allowing top players to anticipate the play, move more intelligently across the pitch, and take up more advantageous positions.

Creative Runs - New options for influencing your team’s movement off the ball revolutionise attacking build up play in FIFA 21, giving you more ways to break down the defence