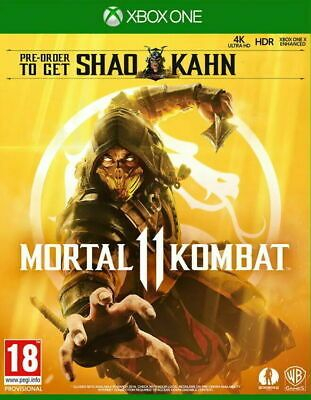 Mortal Kombat is back and better than ever in the next evolution of the iconic franchise. The all new Custom Character Variations give you unprecedented control to customise the fighters and make them your own. The new graphics engine showcasing every skull-shattering, eye-popping moment, brings you so close to the fight you can feel it. And featuring a roster of new and returning Klassic Fighters, Mortal Kombat’s best in class cinematic story mode continues the epic saga over 25 years in the making.

Mortal Kombat 11 is the latest installment in the critically acclaimed franchise, providing a deeper and more personalized experience than ever before with an all new Custom Character Variation System that gives players the creative control to customize versions of the entire character roster. Developed by award-winning NetherRealm Studios, Mortal Kombat 11 will introduce a new cinematic story continuing the epic saga that is more than 25 years in the making.


PostTweetShare Share with WhatsApp Share with Messenger
Community Updates
EBay DealsEBay discount code
If you click through or buy, retailers may pay hotukdeals some money, but this never affects which deals get posted. Find more info in our FAQs and About Us page.
New Comment Subscribe Save for later
3 Comments
24th Nov 2019
Recent feedback from this ebayer is very concerning.
24th Nov 2019
The question is. Will this be heading to gamepass any time soon?
24th Nov 2019

Recent feedback from this ebayer is very concerning.