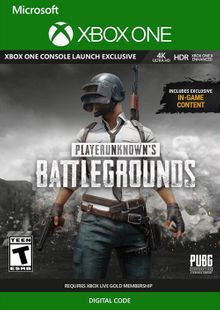 NOT JUST A GAME. THIS IS BATTLE ROYALE.

From the makers of the best-selling PC phenomenon, PlayerUnknown's Battlegrounds drops players into a competitive survival battle where you’ll engage in a heart-racing fight to be the last player left alive. Loot supplies, find weapons and gear-up to take on the competition in a solo or team squad match. Emerge the lone survivor in a thrilling game experience full of unexpected, adrenaline-pumping moments.

PostTweetShare Share with WhatsApp Share with Messenger
Community Updates
The Game Collection DealsThe Game Collection promo code
New Comment Subscribe Save for later
1 Comment
22nd Jan
It's worth it for this price, at some point it will be the "Assassin's Creed Unity" of 2020.
Edited by: "DCFC79" 22nd Jan