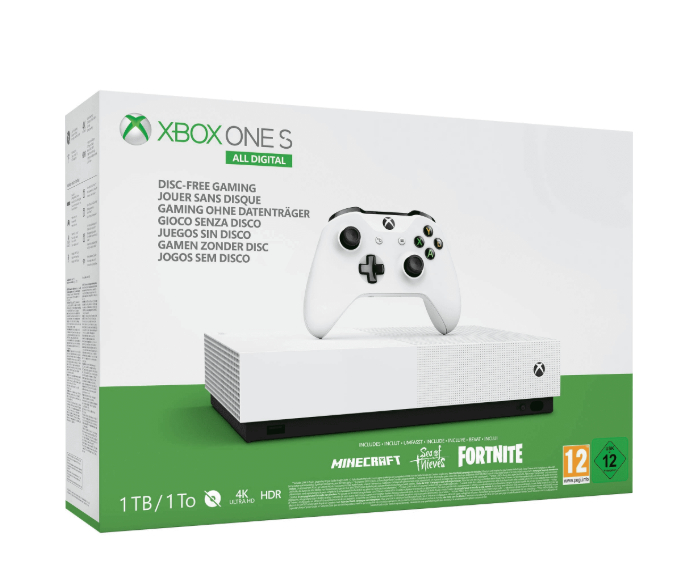 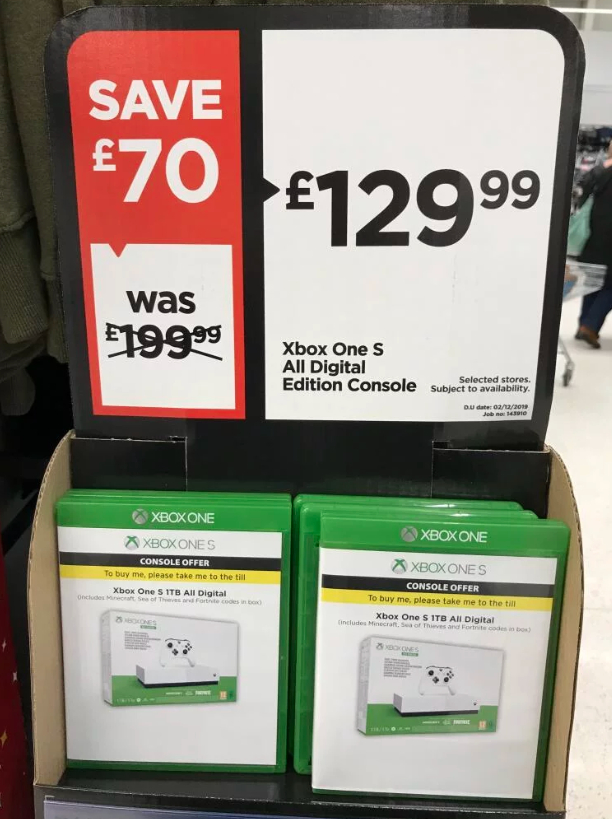 Play with friends and family on the fastest, most reliable gaming network.

Stream your gameplay on Mixer with the touch of a button.

Games are downloaded and ready to play when you are; no need to worry about discs.

Your games and saves travel with you: just sign in on any Xbox One with your Microsoft Account and you're ready to go.

Pick up where you left off on another Xbox One or Windows 10 PC with Xbox Play Anywhere titles like Crackdown 3 and Gears Of War 4.

Stream 4K video on Netflix, Amazon, Microsoft Movies & TV, and YouTube, among others; and listen to music with Spotify and Amazon Music.

Play hundreds of Xbox 360 and select Original Xbox games through three generations of games with backward compatibility.
Xbox One S All-Digital Edition Tech Specs‌
George (Asda George) DealsGeorge (Asda George) discount code
If you click through or buy, retailers may pay hotukdeals some money, but this never affects which deals get posted. Find more info in our FAQs and About Us page.
New Comment Subscribe Save for later
Top comments
28th Nov 2019
Heat from me.right there.nobody pushing and shoving.fighting.swearing.nothing.just pick it up,pay and leave the store.well worth the £20 extra that most people won't even get the Tesco one. ‌ ‌ ‌ ‌ ‌
Edited by: "Sashecuador" 28th Nov 2019
51 Comments
28th Nov 2019
Don't worry i spotted it!
28th Nov 2019
Fortnite is free, so why do these guys make it out that you have to pay to play the game? unless its including Vbucks?
28th Nov 2019
Cheaper at Tesco. Voted cold
28th Nov 2019

I've already got an Xbox one S so thankfully I won't be fighting amongst the great unwashed at my local supermarket.

‌
28th Nov 2019
Heat from me.right there.nobody pushing and shoving.fighting.swearing.nothing.just pick it up,pay and leave the store.well worth the £20 extra that most people won't even get the Tesco one. ‌ ‌ ‌ ‌ ‌
Edited by: "Sashecuador" 28th Nov 2019
28th Nov 2019
are these available in most superstores?
28th Nov 2019
It might be £20 cheaper at Tesco’s but it might cost you more in dental bills 😁
28th Nov 2019

It’s not live at Tesco the price yet isit ?

Tomorrow
28th Nov 2019
There’s no guarantee of me getting one at Tesco’s tomorrow for £109, so I’ve picked one up anyway. If I do manage to score one tomorrow then this one can be returned, if not then I’ve still got a decent deal!
28th Nov 2019
Tesco is the worst place to visit on black Friday or boxing day and people please don't take your kids!!! They will get pushed and shoved
28th Nov 2019

If it wasn't for another certain supermarket deal this would be an excellent price. Perhaps better chance of getting one at Asda without any bloodshed though....
28th Nov 2019

If you can find one, £129 will still represent a good deal to some people who don’t want the stress of fighting over minimal stock with others at 6am
Edited by: "joeydeacon" 28th Nov 2019
28th Nov 2019

‌
28th Nov 2019
will this works in NTSC Country.? moving to U.S.A In 3 weeks so would be good to know if i brought it here. would it work over there?

I don’t think that’s really a thing anymore is it with most TVs operating at 60hz, also most new TVs recognise PAL or NTSC signals. The console itself is region free
Edited by: "joeydeacon" 28th Nov 2019
28th Nov 2019
Must be nationwide. They have them in hunts Cross asda in Liverpool. Just got one now. Would rather pay the extra £20 and be guarenteed it than go and queue up at 4 in the morning and still not possibly get one!
28th Nov 2019
Anyone had luck in other Asdas yet?
28th Nov 2019
Asda living store wrexham has a few left. Just picked one up for my son. Extra 20 quid to guarantee I have one Is well worth imo
28th Nov 2019

Literally going there this afternoon, am sorely tempted to get one as a second console in another room!
28th Nov 2019

Good luck finding them though . It’s still cheaper than most retail so cold vote is a little harsh .
28th Nov 2019
Asda where doing the disk drive one for £150 the other day with Forza 4 they still doing that?
28th Nov 2019

Anyone had luck in other Asdas yet?

I second that about the OPers.they have given us some fantastic deals this year and even the OPs who got it wrong with cold deals it's a big up to you guys and gals too.thank you.