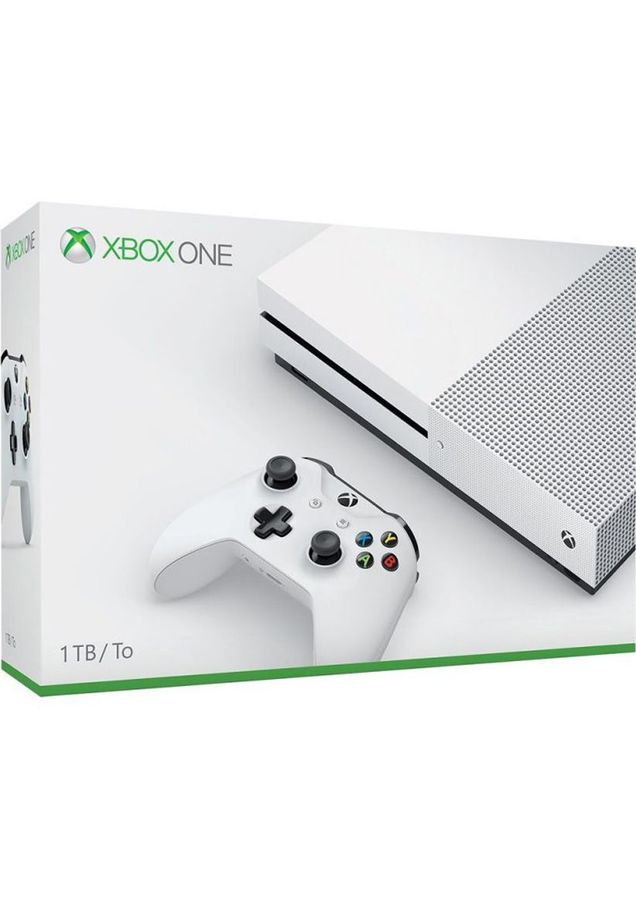 The smallest, and most beautiful, Xbox yet. The Xbox One S slimlines the original Xbox One into a chic new design and re-colours it in an all new ‘robot white’. The console is 40% smaller than the original Xbox One and waves goodbye to notoriously bulky ‘brick like’ power supply. The Xbox One S will allow you to use the console both vertically and horizontally with the addition of a new optional console stand (not included) – it’s up to you how you display, and play, your One S.
WHAT'S NEW ON THE XBOX ONE S?
The Xbox One S boasts 4K capabilities – Ultra HD. This means that Xbox One S will support 4K streaming from the likes of Netflix and Amazon Video, as well as supporting HD Blu-ray.


XBOX ONE S WIRELESS CONTROLLER
The Xbox One S also comes with an all-new controller, again in the ‘robot white’ shade. The controller will feature textured grips and includes Bluetooth in addition to proprietary wireless capability, this resulting in a dramatically improved wireless range. The new Bluetooth controller will also be compatible with PC and is included with the console, it’s also available to buy separately. Other changes include a front, easy-access, USB port.
PostTweetShare Share with WhatsApp Share with Messenger
Community Updates
ShopTo DealsShopTo discount code
If you click through or buy, retailers may pay hotukdeals some money, but this never affects which deals get posted. Find more info in our FAQs and About Us page.
New Comment Subscribe Save for later
Top comments

So tempted to upgrade my original 1tb xb1....

Same here. Got the forza edition. What to do...

Is this good as a 4k blu-ray player?whats the quality like...

Will this play 4K disks?

Thanks, I only want it for my Marvel 4K

Ive just been on google and YouTube- bargain for a console and 4K player .
19th Dec 2019
Sooooooo tempted
19th Dec 2019
Cracking price and for me a much better deal than the similar all digital bundles.
19th Dec 2019

Is the Xbox One X worth double the price ?

Yes. 4k gaming 👌 it's the most powerful console that's currently out

Getting a credit account with Very can be difficult. They wouldn't even let me buy & pay outright with a debit card as an account required a credit check the last time I tried. Amazon has no problem giving me interest free credit on most things, even though I've never asked & only used it for a TV & old Amazon Show.
19th Dec 2019
£169 at Amazon with Star Wars Jedi game, not bad getting the game for £30.

Their business model is based on credit worthiness and unfortunately errors in assessing it are not uncommon.
19th Dec 2019
likelihood of it going lower in post-christmas/new years sales?
19th Dec 2019

Some are native 4k and some are upscaled. It is capable of 60fps with a lot of games. Either way it's still the most powerful console out at the moment. If that isn't enough for you then go build a gaming pc.
20th Dec 2019
Price will go further down after Christmas with the new Xbox X series on the horizon but great price for a last minute present so I'm in!
Edited by: "Slays" 20th Dec 2019
20th Dec 2019
That's what they where all saying on black Friday
Thanks op I've ordered
20th Dec 2019
does the blu ray player support Dolby Vision?
20th Dec 2019
Please guide me if this deal is better or the one from Amazon Italy for Xbox One S 1TB, with three digital games for £117 is better. Have to buy for my nephew and I can't decide
20th Dec 2019

Paying with installments on Amazon isn't done on a credit agreement. There's no credit check etc. You just need to have held your account for at least a year and have a valid credit card linked to your account.
Edited by: "Add_to_Basket" 20th Dec 2019
20th Dec 2019
Bought. Been holding out and was thinking of getting an X but with this and sharing my son's game pass plus EA access for FIFA 20 I'm sorted
20th Dec 2019
Selling off the last of these machines now as they're readying for the series x
20th Dec 2019
Hot definitely
20th Dec 2019
It isn't going to be called the 'series x'
20th Dec 2019
Good find!
20th Dec 2019
Wow hot
20th Dec 2019
Usually towards the end of a generation I get an Xbox but there's no games that I want to play this time