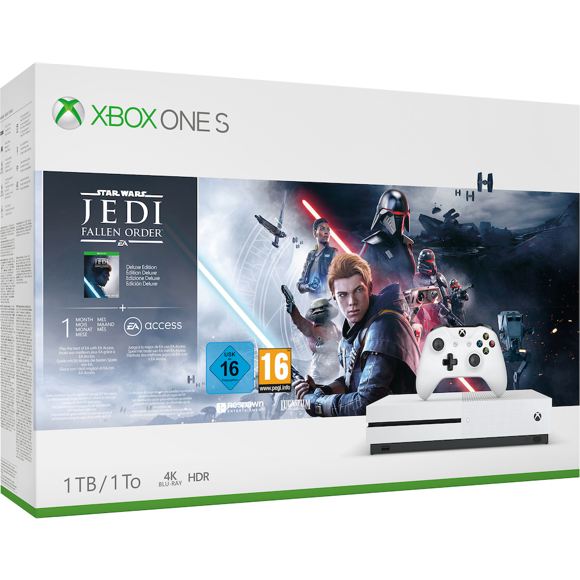 Xbox One S Star Wars Jedi: Fallen order Bundle and experience the thrill and challenge of becoming a Jedi. Step into the role of a Jedi padawan who narrowly escaped the purge of order 66. Engage in innovative lightsaber and force combat on a galaxy-spanning adventure as you stay One step ahead of the Empire and its deadly inquisitors. Continue your training, explore the mysteries of the force and become the Jedi you were meant to be. This bundle includes an Xbox One S, an Xbox wireless Controller, a full-game download of Star Wars Jedi: Fallen order Deluxe Edition, a month Xbox Live Gold subscription, a month Xbox Game Pass for Console trial, and month of EA access. Whether you're playing games, watching 4K movies, or streaming gameplay, there's never been a better time to game with Xbox One.
PostTweetShare Share with WhatsApp Share with Messenger
Community Updates
Coolshop Deals
New Comment Subscribe Save for later
Top comments
19th Jan
Honestly, just spend £90 more and get an Xbox one X.

Worth every penny and will sell better down the line.
46 Comments
19th Jan
Honestly, just spend £90 more and get an Xbox one X.

Worth every penny and will sell better down the line.
19th Jan

Some people will be happy to spend less and buy a One S as they are popular consoles too.
19th Jan

I just think its worth spending £90 more and getting a console that is over 4x more powerful. Maybe it's just me.

That's not to say this is a bad price for a One S, it will just seem "meh" with the current One X prices.
19th Jan

If you are referring to your deal which is just the console, that will be back upto £284 once code expires tonight. There are no real special Xbox One X console bundle offers right now as most are around £300.

I did make the point that this deal wont seem as good currently due to the xbox one x deal.

Once it expires and people have to spend £300+, then it will look better.
19th Jan

Could be worse. I could be liking my own comments.

Didn’t realise you had. Oh dear...if only there was a facepalm emoji !

Edit: Ah I’m with you. Arcandpie is the one liking himself. Unbelievably sad that
Edited by: "DAZZ2000" 19th Jan
19th Jan

I know it winds you up
19th Jan

It winds him up
19th Jan

I know it winds you up

Nope - just an easy way of not trying not to look foolish now - kinda like your attempt to steal that Nintendo Switch deal.
19th Jan

If it didn't bother you, you wouldn't point it out
19th Jan

If it didn't bother you, you wouldn't point it out

I have to point out foolishness and now users will think you are sad liking your own comments.

Have a great night.
19th Jan

Have a great night
20th Jan

Why dude? If you have a 1080p load times are marginally better on the X, graphical changes are unnoticeable.
20th Jan

I've used a One X on a 1080p screen, looks much better then a One S at 1080p, due to the increased sharpness on the textures, increased draw distance etc.

But I agree, you only notice the biggest difference when on a 4K display.
Edited by: "ArcAndPie" 20th Jan
20th Jan
I use an X on a 4k and load times and graphics seem to be marginal to me, this seems like a good deal.
20th Jan

Interesting, as a rule at 1080p there is essentially no difference.

Most of the comments even seem to prefer the one S at 1080p lol, I can't see a goddamned difference, if you're on 1080p the consensus is clear - save your money and get a one S.
Edited by: "zeb.mattey" 20th Jan
20th Jan

I'm talking from personal experience. Others may have experienced other things.

Admittedly the set ups were on big-ish TVs. Perhaps on smaller screens or monitors it wont make as much of a difference.

But either way, 4K is fantastic and people should invest.
Edited by: "ArcAndPie" 20th Jan
20th Jan

Right, but we can all see comparisons on youtube and google images, the difference is negliglble at 1080p for almost every game in the comparison. You'd be hard pressed to see which is X and which is S....
20th Jan

...Right... That doesn't really represent a real in person experience.

I'm just telling you from personal experience, the One X looks sharper on X Enhanced games at 1080p, compared to One S. And more view distance.
20th Jan

People may not want the x. Its a different product. I've just bought an iPhone 11. Should I have paid a little more and got the pro, no. Why spend more when you won't use a product to its capabilities and the other model is fine. HUKD isnt a product comparison site. Its finding the cheapest deal for that product.
20th Jan

Yeaaaaah... comparing a phone to a console is very different.
20th Jan

Yeaaaaah... comparing a phone to a console is very different.

Who compared a phone to a console? I didn't. Your missing the point a little my friend. Go eat some pie and relax.
20th Jan

So you can't compare it.

Even if you're only using the One X on a 1080p screen you still get extra benefits + better selling value.
20th Jan
I have a HD TV, not 4K. I don't care about load times. I'm a casual gamer and will probably keep hold of my console. Should I spend more and get the X? Genuine question?

The analogy with the phone was in regards to different specifications. Why get a souped up model when I don't need it. Face-palm
20th Jan

Just checked your stats. 98.7% of your likes are you liking your own comments ‌
20th Jan

Yes you should, but only when its back to £270 or less. Honestly the best console purchase I've ever made for my usage.

I wouldn’t bother right now mate. Hang on to your current machine I’d say and you can always exploit a cheaper X deal later when you’ve got a 4K tv or you just skip entirely in favour of its successor.

I use the PS4 Pro with a 1080P tv and almost all the time the games play as they did on the PS4. Sometimes I’ll get a little extra frame rate or maybe slightly higher textures but it’s more likely that I see negligible difference. I suspect I had more money than sense at the time I bought!
20th Jan

Get the S, you can look at comparisons on youtube of the X and S at 1080p. The difference is absolutely marginal and unnoticable, save your money for a PS5 or series x.
20th Jan

Agree with the guys above. Spending almost 300 without a game on the X may be pointless when next gen consoles are out soon. Turrah.
Edited by: "jeh12369" 20th Jan
20th Jan

Not when you can sell it for £150-200 later down the line. Turrah.
20th Jan
I never said I wanted to sell it. Stop trying to throw the X down people's faces Bill Gates.
20th Jan

That's because the Ps4 Pro mainly just makes games higher resolution. So on a 1080p screen it won't do much, although the supersampling helps.

X enhanced games on the other hand, does a lot more.
20th Jan

But you mentioned the new consoles.

You can get the One X with a game for £270 sooner or later, then play all the amazing upcoming games like Cyberpunk 2077 in the best console quality, and then sell it for £150-200 to put towards the new consoles later this year.

Or just play them in average quality with a One S. Whatever tickles your fancy.