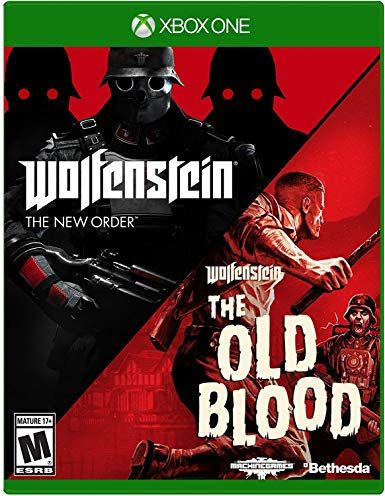 [Xbox One] Wolfenstein: The Two-Pack Inc The New Order & The Old Blood - £5.99 with Gold @ Microsoft Store

Wolfenstein The New Order reignites the series that created the first-person shooter genre. The year is 1960 and the Nazi's have won World War II. War hero B.J. Blazkowicz must launch an impossible counter-offensive against the monstrous Nazi regime that has conquered the globe.

Intense, cinematic and rendered in stunning detail with id® Software's id Tech® 5 engine, Wolfenstein sends players across Europe on a mission to bring down the Nazi war machine. Infiltrate their most heavily guarded facilities, battle high-tech Nazi legions, and take control of super-weapons that have conquered the earth – and beyond. Wolfenstein is under development at MachineGames, a studio comprised of a seasoned group of developers recognised for their work creating award-winning games.

Wolfenstein The Old Blood is a standalone prequel to the critically acclaimed first-person action-adventure shooter, Wolfenstein The New Order. The adventure, which spans eight chapters and two interconnected stories, features the hallmarks of MachineGames – thrilling action, immersive story and intense first-person combat. As war hero B.J. Blazkowicz, arm yourself with new weapons such as the bolt-action rifle and grenade-launching Kampfpistole as you attempt to thwart the advancing Nazi war machine, and take advantage of duel-wielding pipes that can be used for wall climbing – or for vicious take-downs of never-before-seen Nazi adversaries.

The year is 1946 and the Nazis are on the brink of winning World War II. In an effort to turn the tide in the allies’ favor, B.J. Blazkowicz must embark on an epic, two-part mission deep within Bavaria… Part one of Wolfenstein: The Old Blood - Rudi Jäger and the Den of Wolves - pits BJ Blazkowicz against a maniacal prison warden as he breaks into Castle Wolfenstein in an attempt to steal the coordinates to General Deathshead’s compound. In part two – The Dark Secrets of Helga Von Schabbs – our hero's search for the coordinates leads him to the city of Wulfburg where an obsessed Nazi archaeologist is exhuming mysterious artefacts that threaten to unleash a dark and ancient power.


PostTweetShare Share with WhatsApp Share with Messenger
Community Updates
Microsoft (Microsoft Store) DealsMicrosoft (Microsoft Store) promo code
If you click through or buy, retailers may pay hotukdeals some money, but this never affects which deals get posted. Find more info in our FAQs and About Us page.
New Comment Subscribe Save for later
2 Comments
19th Dec 2019
Are these any good? Keep hovering over the buy button...
19th Dec 2019

Are these any good? Keep hovering over the buy button...

I'm gonna try them out on game pass first before buying it...