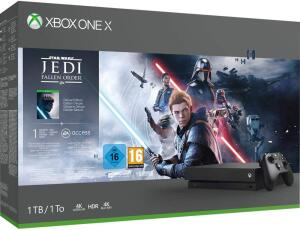 Product features
Want to game in 4K? Look no further than the Xbox One X. The X is incredibly powerful – so your games are super smooth and realistic, with lightning fast load times.

And the Xbox One X doesn't just give you Ultra HD graphics, you've got HDR too. HDR (High Dynamic Range) gives you better contrast on your games. So when you're exploring a dark city scene, or hunting through a creepy mine, you'll see everything in the shadows.

Good quality sound can make all the difference in-game. Which is why the Xbox X has Dolby Atmos (the fancy audio software you get in TVs and sound bars). Plug in your headset and you'll get proper surround sound. When someone's attacking from behind – you'll know exactly where they are.

There's also loads of games that are designed to be played in 4K, and look their absolute best on the Xbox One X. Just look for the Xbox One X Enhanced badge on the game.

Compatible with pretty much everything

Don't have a 4K TV yet? Don't worry – the Xbox One X is still going to make your games look better than ever before.

There's loads of backwards compatible titles too. Hundreds are available to play from the Xbox 360, and even some from the original Xbox. Get ready for all of the nostalgia.

And if you have existing Xbox accessories – don't worry about needing to upgrade. Your headset and controllers are still compatible.
PostTweetShare Share with WhatsApp Share with Messenger
Community Updates
Microsoft (Microsoft Store) DealsMicrosoft (Microsoft Store) promo code
New Comment Subscribe Save for later
4 Comments
25th Mar
In stock and ordered, cheers OP
27th Mar
Keeps gong out of stock
30th Mar
This one comes back periodically. Ordered mine this afternoon. Thanks OP.
2nd Apr
Watching the price on the game