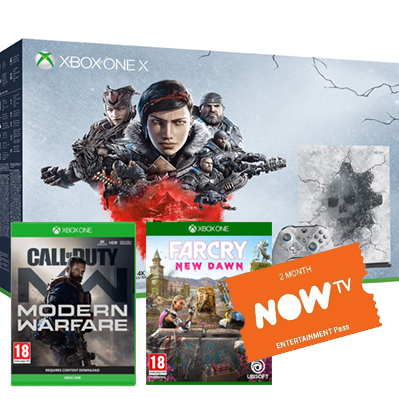 I think this is a cracking offer for anybody looking for the Limited Edition Xbox One X console. It comes with either Call of Duty: Modern Warfare or FIFA 20 and Far Cry: New Dawn or South Park the Fractured but Whole, plus a 2 month NOW TV Entertainment pass.

Available online and in store.

There's also the option to knock £100 off by trading in a standard PlayStation 4 console or an Xbox S console, these are what you can trade in, and how much you'll pay... 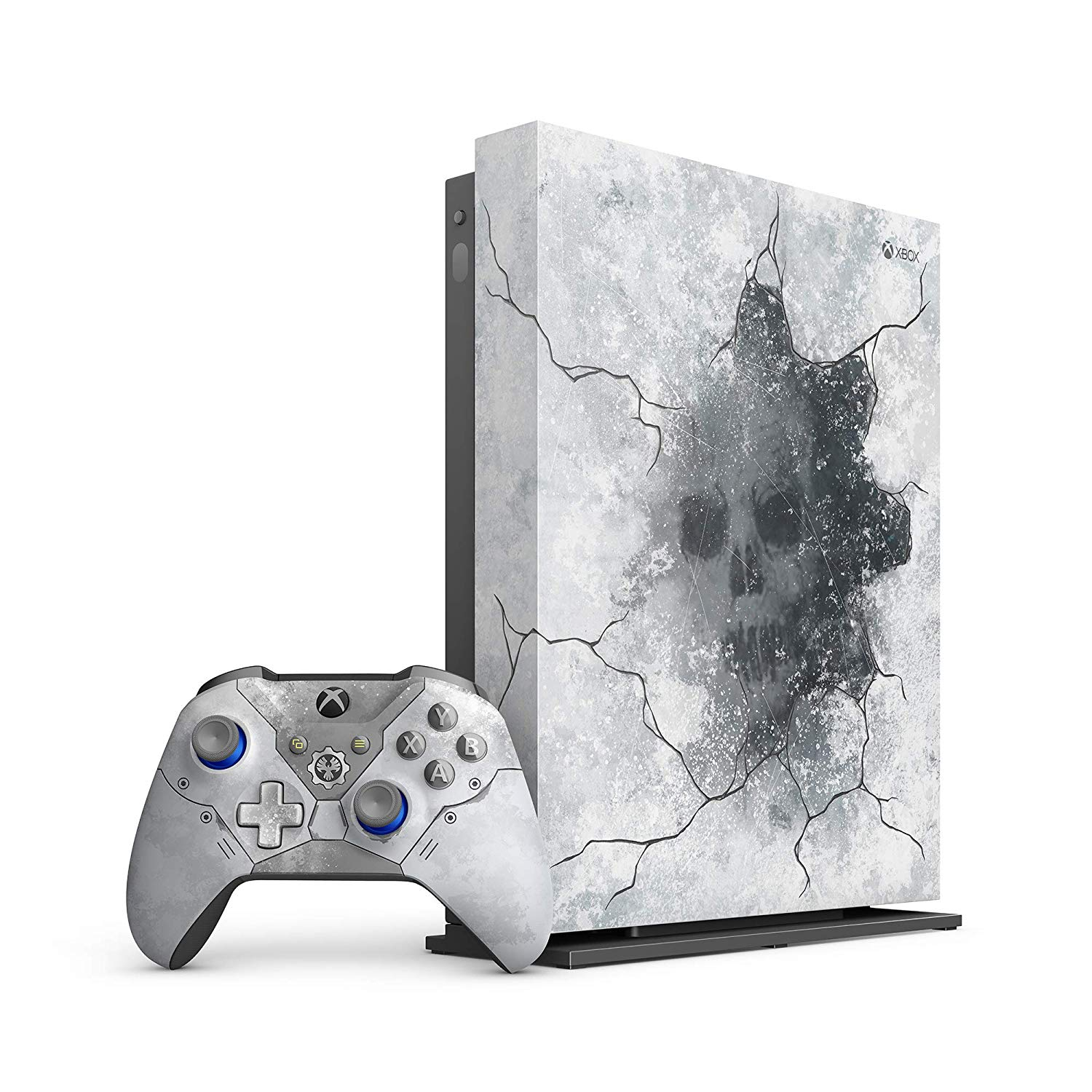 Join Kait Diaz on her journey to uncover her connection to the enemy and the true danger to Sera—herself. This bundle includes a Limited Edition Xbox One X, a full-game download of Gears 5 Ultimate Edition; a full-game download of Gears of War Ultimate Edition; full-game downloads of Gears of War 2, 3, and 4; a 1-month trial of Xbox Game Pass; 1 month of Xbox Live Gold; and the Xbox Wireless Controller – Kait Diaz Limited Edition. With 40% more power than any other console, a library of over 1300 games, and true 4K gaming, games play better and are more immersive on Xbox One X.

PostTweetShare Share with WhatsApp Share with Messenger
Community Updates
GAME DealsGAME discount code
If you click through or buy, retailers may pay hotukdeals some money, but this never affects which deals get posted. Find more info in our FAQs and About Us page.
New Comment Subscribe Save for later
Top comments
24th Oct 2019

Buzz, no way Black Friday will beat this ..? Right Buzz?

Everybody seems to have dropped the X consoles down to this price today, but I thought this was a bit of a bargain to be honest. It's hard to predict how Black Friday is going to go down, but I can't see this particular model going much cheaper.

Seems decentish. Wish they offered some trade in for OG Xbox

Prices for the original console are stated as...

Seems decentish. Wish they offered some trade in for OG Xbox

Prices for the original console are stated as...

24th Oct 2019
WTF - this is awesome
24th Oct 2019
Console deals with Call of duty MW still have a fair way to drop between now and Black friday.It will just take one retailer to drop prices futher and the rest will cave...
24th Oct 2019

Thanks buddy. With the new one coming out next year, £300 is not worth it at all.

I’m afraid it doesn’t work that way for consoles. Console prices are coming directly from the manufacturers. Because of the low margins on them, retailers don’t have the freedom of playing with prices much.
24th Oct 2019

Really want to trade in my battlefield one x for this bad boy.

Not gonna happen. A lot of people on here are expecting the prices to slash but prepare to be disappointed. The One X won't drop below 330. If it does i'l eat my hat.
24th Oct 2019

Pro doesn't even have a 4k drive, or do 4k native

Or have a name that can easily be referred to as ‘Sex Box’ to irritate the wife. 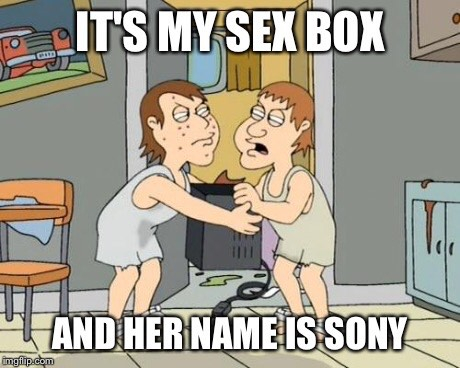 Great deal then in that case, considering Argos are selling console and gears games only for £450
24th Oct 2019

Your can eat my top hat and monocle after prices drop below 330 and I smug it up. This year is particularly important to sell as much stock as possible.
24th Oct 2019

Argos will be £369.99 tomorrow. but this deal is much better since console is LE.
24th Oct 2019
Xbox one x is average £200 now on gumtree, the choice is there if you don't mind second hand & you view it perfectly for flaws before buying, personally if you wanted a 360 again to play titles that were not bwc, you would buy, like my last 2 360's, but my xbox one s has always been brand new with two controller's on black Friday at £160 & I recon this year the same deal should hit £140 I'm hopping as I tend to buy and resell at Xmas and make cash like normal (cash made goes towards the new xbox next year)
Edited by: "leechris82" 24th Oct 2019
24th Oct 2019

Does anyone want to trade Flamedeers I have loads

How do u get more
25th Oct 2019
Decent deal but for me personally it's too much to spend when the next system is out in a year. I snapped up used xbox one x on the FB marketplace months ago for £170, controller, boxed and everything. Got lucky I guess
25th Oct 2019
I’m getting this today
25th Oct 2019

Yeah, you got very lucky. This is a great deal with some great games. Should keep anyone busy for a little while.
25th Oct 2019

Buzz, no way Black Friday will beat this ..? Right Buzz?

Everybody seems to have dropped the X consoles down to this price today, but I thought this was a bit of a bargain to be honest. It's hard to predict how Black Friday is going to go down, but I can't see this particular model going much cheaper.

This definitely in-store as well ?

Thanks kept checking thier twitter and couldn't see any of their stores post about it.
25th Oct 2019

Can you link it ? My game are normally crap with things like this and will swear it's not in a deal. Thanks