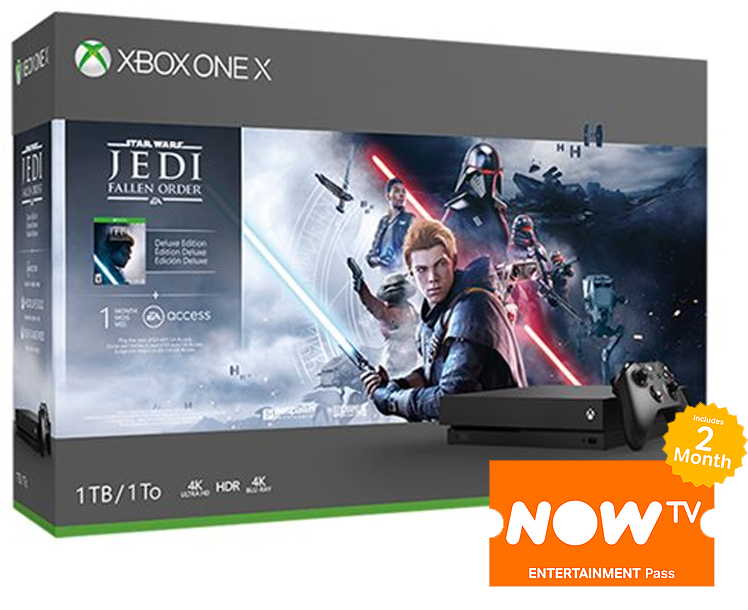 Under £300 for a brand new Xbox One X console is a bargain in itself. Add to that list the newly released Star Wars Jedi: Fallen Order and this is a bloody bargain


Purchase the Xbox One X Star Wars Jedi: Fallen Order™ bundle and experience the thrill and challenge of becoming a Jedi. Step into the role of a Jedi Padawan who narrowly escaped the purge of Order 66. Engage in innovative lightsaber and Force combat on a galaxy-spanning adventure as you stay one step ahead of the Empire and its deadly Inquisitors. Continue your training, explore the mysteries of the Force, and become the Jedi you were meant to be. This bundle includes an Xbox One X, an Xbox Wireless Controller, a full-game download of Star Wars Jedi: Fallen Order™ Deluxe Edition, a 1-month Xbox Live Gold subscription, a 1-month Xbox Game Pass for Console trial, and 1 month of EA Access.* With 40% more power than any other console, a library of over 1300 games, and true 4K gaming, games play better and are more immersive on Xbox One X.

Step into the role of a Jedi Padawan who narrowly escaped the purge of Order 66Develop your connection to the Force and tap into powerful Force abilities for exploration and combatMaster the iconic lightsaber in thoughtful and innovative combat Experience iconic and familiar planets, weapons, gear, and enemies while meeting a roster of fresh characters, locations, creatures, droids, and adversaries new to Star Wars™ on a galaxy-spanning adventureGet the story behind the game with the Star Wars Jedi: Fallen Order™ Deluxe Edition, including a cosmetic skin for BD-1, a cosmetic skin for the Stinger Mantis, a Digital Art Book, and a “Director’s Cut” featuring behind-the-scenes videos containing over 90 minutes of footage from the making of the gameEnjoy instant access to over 100 high-quality games out of the box with the included 1-month trial of Xbox Game Pass for Console*Play online with the greatest community of gamers on the fastest, most reliable gaming network with the included 1-month subscription of Xbox Live Gold*Watch 4K Blu-ray™ movies; stream 4K video on Netflix, Amazon, and YouTube, among others; and listen to music with SpotifyBundle includes:* 1TB Xbox One X console, Xbox Wireless Controller, full-game download of Star Wars Jedi: Fallen Order™ Deluxe Edition, a 1-month Xbox Live Gold subscription, a 1-month Xbox Game Pass for Console trial, and 1 month of EA Access
PostTweetShare Share with WhatsApp Share with Messenger
Community Updates
GAME DealsGAME discount code
If you click through or buy, retailers may pay hotukdeals some money, but this never affects which deals get posted. Find more info in our FAQs and About Us page.
New Comment Subscribe Save for later
Top comments
24th Nov 2019

Playing this currently on PS4 it’s an incredible game man

Won't be in unboxing either until I move into my place in 3 weeks so I'm excited af. Who said divorce has to be disappointing?

Bite now or wait.. kinda would prefer the gears bundle...

You can get Gears using the Game Pass, so better to get this with Star Wars...my opinion amyway.
24th Nov 2019
Tempting deal to see me through until Scarlett.

The new releases all running like trash on the base consoles is really starting to bum me out.
24th Nov 2019

Is the game a physical or digital copy?

Yes, they are - here's the full Game Pass list if anyone wants to take a look at what's there!

Any trade in deals?

Game website give you an estimate on trade in's. For example £80 store credit on original XBox One 500gb.
24th Nov 2019
Anyone know if this will be the same price in store too?
24th Nov 2019
The Star Wars game will be a code on a card I have the same Xbox I got it this week
24th Nov 2019
Any info on Death Stranding console b-boy?
24th Nov 2019
Oh my gosssshhh exactly what I was waiting for 😁😁 I'll trade the game probably as I'm not a big star wars fan but this is an ace deal thank you!
24th Nov 2019

The PlayStation Store in the US has dropped it to $299 for Black Friday. Fingers crossed we see something similar over here.

This would be insane 🙈🙈

It would be but you never know!
I believe th new xbox is out next year so thats what i am guessing will be the old stock prices!
Maybe a bit optimistic on the x but the digi s should have been £99 when it first came out!

Walking dead eh
Series 10 big disappointment its gone down the pan every episode as boring as the last!
FTWD is where its at now that sexy Swat truck - stroke of genius and the cowboy all the characters beat TWD now!