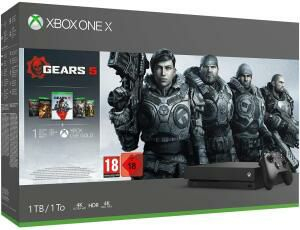 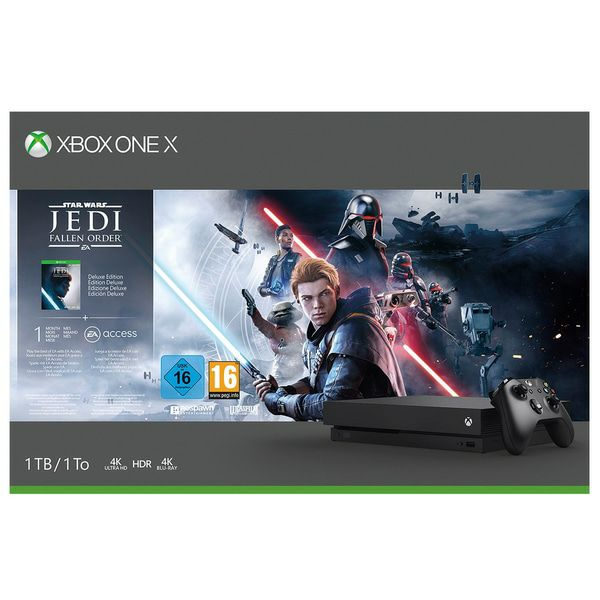 Own the Xbox One X Star Wars Jedi: Fallen Order™ bundle and experience the thrill and challenge of becoming a Jedi. Step into the role of a Jedi Padawan who narrowly escaped the purge of Order 66. Engage in innovative lightsaber and Force combat on a galaxy-spanning adventure as you stay one step ahead of the Empire and its deadly Inquisitors. Continue your training, explore the mysteries of the Force, and become the Jedi you were meant to be. This bundle includes an Xbox One X, an Xbox Wireless Controller, a full-game download of Star Wars Jedi: Fallen Order™ Deluxe Edition, a 1-month Xbox Live Gold subscription, a 1-month Xbox Game Pass for Console trial, and 1 month of EA Access.* With 40% more power than any other console, a library of over 1300 games, and true 4K gaming, games play better and are more immersive on Xbox One X. 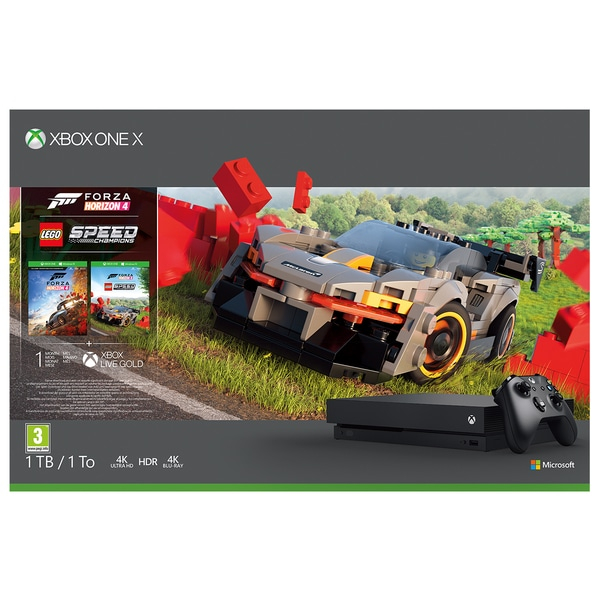 Own the Xbox One X Forza Horizon 4 LEGO® Speed Champions bundle and bring your Master Builder dreams to life. Experience a shared and open world, explore Britain and a wonderous new LEGO Valley, and fill your garage with an incredible array of Speed Champions cars. Collect Bricks and construct the ultimate Master Builder’s House for your racing machines. This bundle includes an Xbox One X, a full-game download of Forza Horizon 4 with the LEGO Speed Champions add-on, and more. With 40% more power than any other console, games play better on Xbox One X.
PostTweetShare Share with WhatsApp Share with Messenger
Community Updates
Smyths Toys DealsSmyths Toys discount code
New Comment Subscribe Save for later
Top comments
21st Mar

Yes... But then you don't have a PS4 anymore.
26 Comments
20th Mar
tempting
21st Mar
Not a great deal when you can get it cheaper at game by trading in a ps4 console.
21st Mar

Assuming one has a PS4, and/or wants to trade it in towards a different system. Weird comment.
21st Mar
Surely everyone has a PS4 by now. I still had mine when i upgraded to a PS4 Pro.
21st Mar
Why would you buy this when next generation console is out soon
21st Mar

Even if 'everyone' had one, that doesn't mean everyone is necessarily interested in getting rid of it to buy another system. If anything, you would likely have more people trading their PS4 for the 5 when the time comes, not trading it for a different current gen system that will also be replaced in matter of months.
21st Mar

I wouldn't pay £250 for an X, but I would buy one for like £200 if it drops that low and ride it out till 2022 when the series X has established its own library. If this gen is anything to go by, these systems take a couple years to get going, for all the kinks to be worked out, possible pricedrops or promotions or maybe even revised hardware. There is imo some value still in getting an X if you can get it for a really good price and don't need the latest and greatest day one.
21st Mar

I've learned from the early 360 days (red ring) never to buy a console in the first few years anyways. Plus you never know, there could be a hardware revision which you could go for or else the previous version will be cheaper?
21st Mar

Exactly my point. The launch period is actually the worst value for money proposition. I personally wouldnt buy either of the new consoles before 2022 but to each their own.
21st Mar

What if you don't have a ps4 to trade in?

Brilliant! Even better if you can trade-in 10 PS4 Consoles and get 10 Of this Xbox One X, you can sell them on eBay for profit. Extra ching ching in your pocket. Are you going to buy the remaining 9 PS4 Consoles?
21st Mar

Given the hard situation the world economy is in now, it's better to hold to your dear money instead of splashing on non essentials.
21st Mar

You're not wrong on that one.
21st Mar
Xbox One X Star Wars Jedi: Fallen Order Bundle OOS for Home Delivery. So is the Forza bundle. Stock still available in-store though.
Edited by: "bluefish2303" 21st Mar
24th Mar

This is either a joke, or you hoard toilet roll...
31st Mar

This is either a joke, or you hoard toilet roll...

It was a joke but i think everyone took me seriously. lol
31st Mar

It was a joke but i think everyone took me seriously. lol