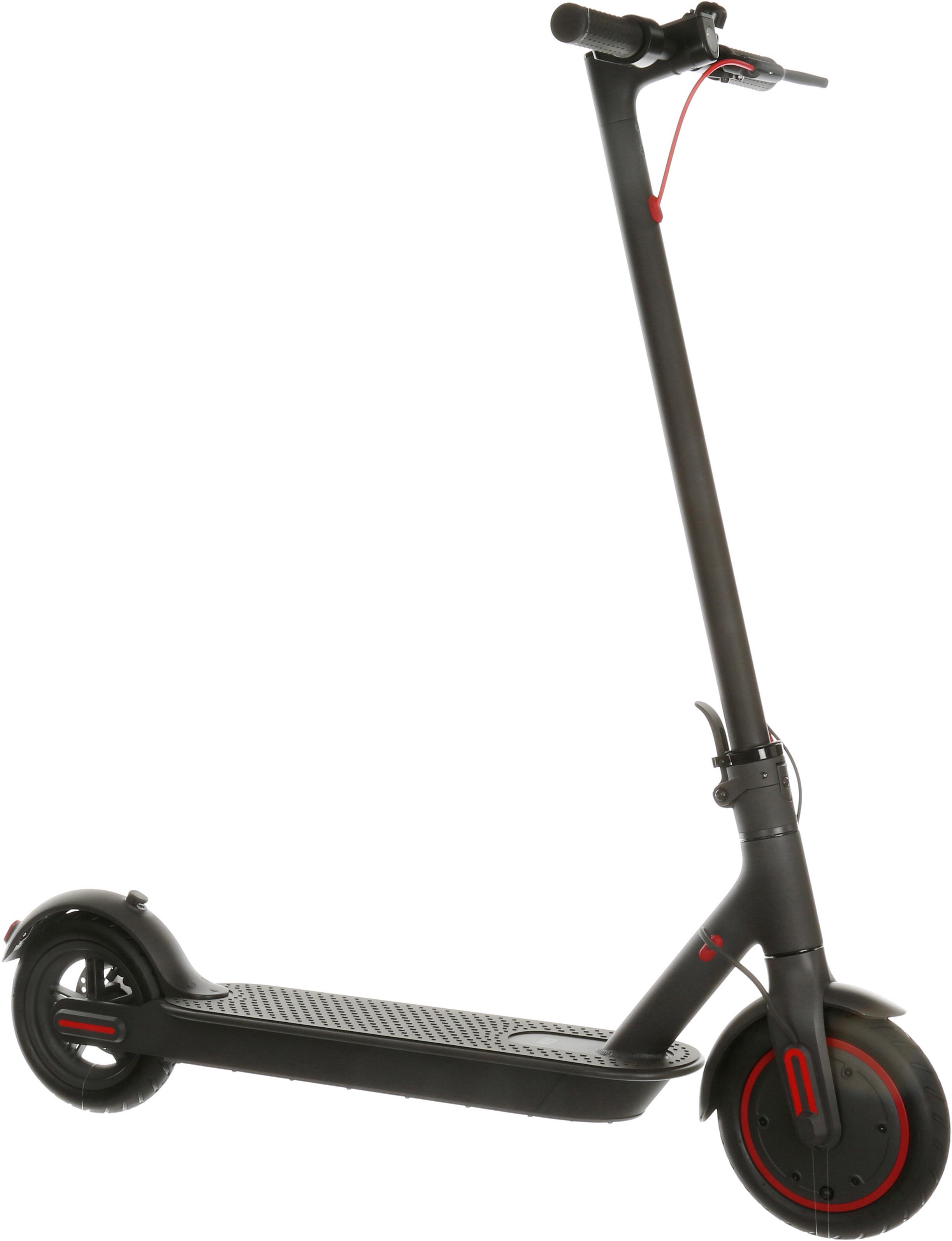 Halfords are offering the latest and greatest Xiaomi Scooter Pro, yes Pro for only £420 with trade in. Use code Tradein20. The offer state excluded escooters but it seems to work. It includes 24 months warranty. They also have the M365 black for £319.20 after trade in!
PostTweetShare Share with WhatsApp Share with Messenger
Community Updates
Halfords DealsHalfords Discount Codes
If you click through or buy, retailers may pay hotukdeals some money, but this never affects which deals get posted. Find more info in our FAQs and About Us page.
New Comment Subscribe Save for later
Top comments
3rd Sep 2019
The problem is that a large proportion of the British seem too turn into complete blithering idiots the moment they get on any sort of vehicle.
Edited by: "N1Andy" 3rd Sep 2019
3rd Sep 2019

women used to be confined at home to take care of the home cleaning, cooking and the family, what are they doing now in the middle of the street?
Edited by: "bobo53" 3rd Sep 2019
42 Comments
3rd Sep 2019
Friend was stopped riding one of these in the cycle lane by police in London. Got off with a warning.
3rd Sep 2019 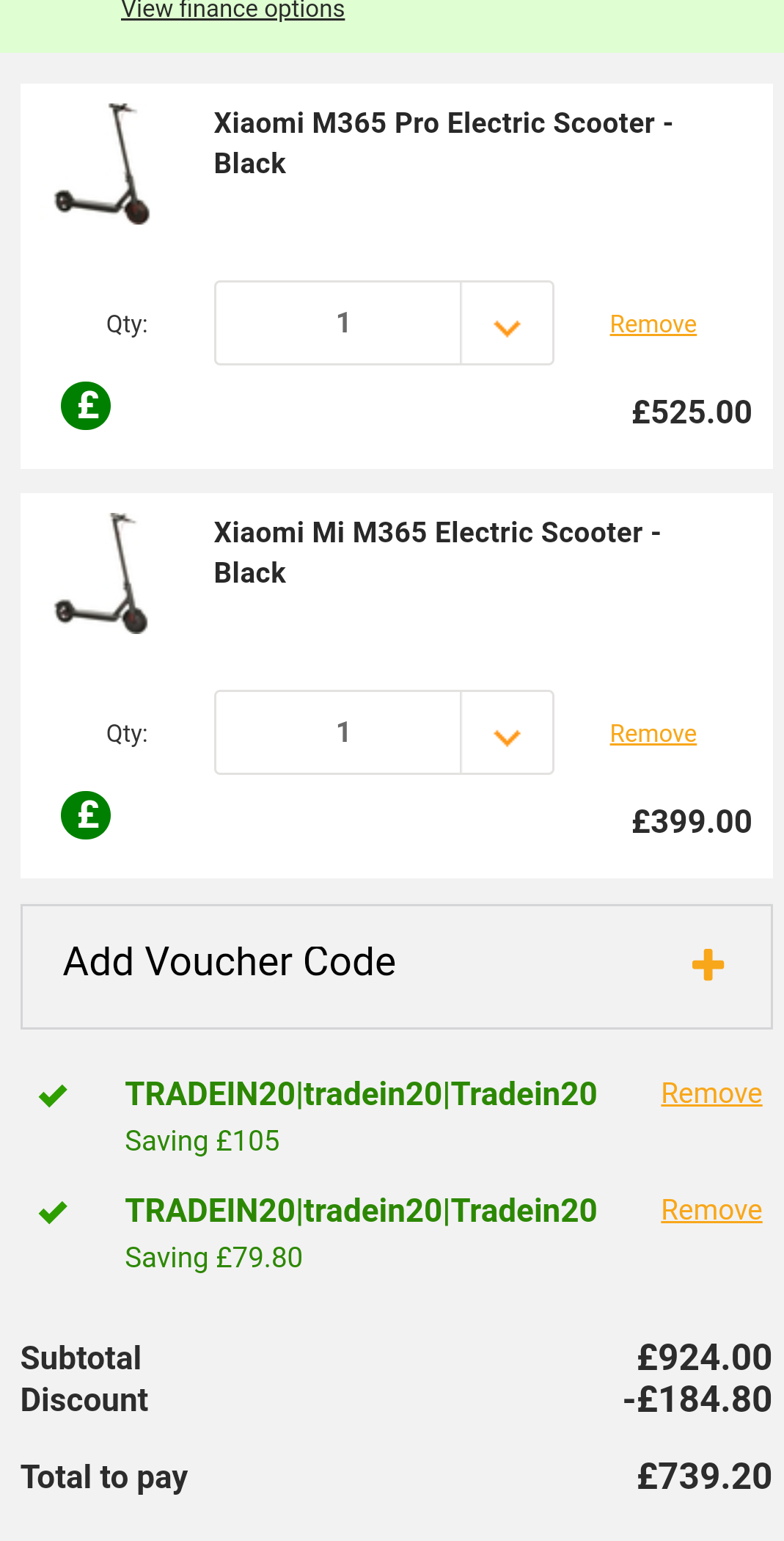 They need to bring in legislations. E transport is the way forward. It's only a matter of time. Regulations behind technology. Similar when the Drones were initially introduced.
3rd Sep 2019
Legally they can only be used on private land so not exactly a deal for most ordinary folk who care about legality and wish to avoid being prosecuted..
Edited by: "TheBiker" 3rd Sep 2019
3rd Sep 2019

Why? Cycling is healthier anyway.
3rd Sep 2019
The problem is that a large proportion of the British seem too turn into complete blithering idiots the moment they get on any sort of vehicle.
Edited by: "N1Andy" 3rd Sep 2019
3rd Sep 2019

They told him they were clamping down on these because some woman got run over riding one of these (carelessly I might add).

women used to be confined at home to take care of the home cleaning, cooking and the family, what are they doing now in the middle of the street?
Edited by: "bobo53" 3rd Sep 2019
3rd Sep 2019

"Electric scooters must not be used on public highways, pavements, cycle lanes or bridleways, but only on private property with the owner's consent. For further guidance, please click here."
3rd Sep 2019

That's out of order. She was in a cycle lane and had a helmet on. She hit a pot hole and was thrown off the scooter and out of the cycle lane in front of ask HGV. Nothing careless about it. This happened at a roundabout that has killed many cyclists and there have been countless protests about how badly designed and unsafe it is.
3rd Sep 2019

It is specifically illegal to use these in a cycle lane, quite aside from other laws prohibiting their use in public areas.
3rd Sep 2019
Bear in mind that not everywhere is London. These posts are always blighted by the ‘can’t ride these anywhere’ brigade. Do us a favour and don’t comment on these deals as you just gum up the thread with the same comments and mask the real comments on how good the deal is/isn’t. It’s really tiresome
Edited by: "foolsgold99" 3rd Sep 2019
3rd Sep 2019

Love the idea of these but we all know (even if some are too young and care free to admit it) that they’re simply an accident waiting to happen if used on public footpaths and roads. They’re fine for running about private land, perhaps on holiday across the caravan park but to repeat what I said only the other day;

Nobody here seems to recognise the point that whilst these remain illegal the vast majority of us law abiding citizens won’t use them outside of private land. If they’re legalised the number of people buying them and using them on public roads will increase exponentially. If only 10% of citizens took one out on the road it would be chaos and roads would become extremely dangerous. Cycle lanes would become clogged up too. Overall, legalisation of these would make them impractical to use on most roads due to the resulting weight of traffic.

I do appreciate that teens love them as they represent a cheap form of transport that gives them no exercise, getting them to college, the station or to their local chip shop and back in time to watch their next episode of love island.

She hit a pot hole and has nothing to do with the scooter. So the bad press shouldn't be about the transport in question but the money the government are investing on our roads

No different to people driving recklessly on the roads in their cars and motorbikes. Cyclists on pavements is also dangerous.
3rd Sep 2019

How is it different to bikes on the roads. Providing the right legislation is introduced and safe to use should be a form of transport for the future. Cut down on cars pollution...
3rd Sep 2019

You want other people to shut up so that you can comment in peace?

Comments are about the deal not the legalities. What we certainly don’t needs are the repeated comments on it. It just masks what people want to really know about I.e. whether it’s a good deal or not.
3rd Sep 2019

No different in the sense that all of those (reckless driving and cyclists on pavements) are also illegal. Do you propose that we should make reckless driving legal, as well as escooters? That would seem to be the message of your comparison.
3rd Sep 2019

And the fact that they cannot be used legally on the roads greatly affects the value of the item. These cost as much as a cheap electric bicycle which is legal to ride. I say they are overpriced for what you get.
3rd Sep 2019

I'm aware and that's why I don't have one. I do have an issue with suggesting the poor girl was riding unsafely though when she was literally doing everything she could to be safe (outside of not using a scooter at all).
Just wish this useless government would legislate one way or another on transport like this. Won't hold my breath though.
3rd Sep 2019

They’re easy to use and lift/transport, a bike is harder work and heavy/cumbersome. That’s why there would be many more of them in use than bikes If legalised. Bikes have to be left/locked and get stolen. Scooters can be folded & stored. Then you need to consider the fragility of them/lack of protection offered if there’s a coming together with another vehicle/pothole/person, they offer no protection. You also need to consider the ineffective breaking and lack of mirrors etc etc. As I say, I love the idea of them but it would just be wrong to legalise them for use on public roads/pavements in the UK. General road conditions here are shocking compared to some countries.
3rd Sep 2019
I suspect most of the "there are illegal, blah blah" simply don't like them and don't think anyone else should.

The existing legislation is from 1835. Doubt they had personal e-vehicles in mind. It desperately needs updating according to the government's own consultation.
3rd Sep 2019

From the government web page: "The definition of “motor vehicle” as set out in the Road Traffic Act 1988 is “any mechanically propelled vehicle intended or adapted for use on roads”." That's much more recent than the date you quote, which relates to a law that says "it is an offence to ride on, or to lead or draw a carriage on a pavement". As the government web page goes on to say, "This rule applies almost all vehicles, with special legal exceptions for mobility scooters and wheelchairs". But this 1835 law is only about taking vehicles, including bicycles, onto pavements, and not about powered vehicles needing insurance, type approval, registration, licencing and so on, for which the legislation is much more current, the same legislation which applies to motor cars and motorcycles. In any case, a law that has withstood time and which Parliament has not seen the need to change is still valid and still has force. And it has in fact been updated for powered vehicles: "Mechanically-propelled vehicles are forbidden from using footpaths by section 34 Road Traffic Act 1988. Powered transporters are prohibited from using cycle tracks, cycle lanes on roads, or other spaces dedicated to pedal cycle use only (section 21(1), Road Traffic Act 1988). EAPCs and mobility scooters are exempt from this ban. In addition, powered transporters cannot be used on bridleways or restricted byways (section 34, Road Traffic Act 1988)."
Edited by: "The_Name_With_No_Man" 3rd Sep 2019
3rd Sep 2019
I've used these several times whilst abroad. They are good fun........ However, a pothole that would be a minor obstacle to a bike is dangerous to these purely because of the small wheel size.
3rd Sep 2019
I'm pretty sure the new legislation for these to become legal is why Boris is suspending parliament 😬
3rd Sep 2019
Can we stack british cycling discount of 10% with it ? Also do we have to trade in as well or its just a code ? Thx
3rd Sep 2019

you have not seen the way some idiots are driving these scoters here in London. It makes me stopping them and badly kick them on the back but they are protected and will arrest me instead. Saying so I am not against and will be looking to buy one
3rd Sep 2019
Code doesn’t work - tradein20
3rd Sep 2019
We’re sorry, we can’t apply this code. It may be invalid for products in your basket, or cannot be combined with others you have applied
3rd Sep 2019

That was a bit insensitive, I'd admit, but that was what he said.

I've been past that roundabout many times. It was redesigned in 2015. It is one if the safest roundabouts for cyclists I've ever seen.

There has been only one fatality by a cyclist in 2017.

It is a bit tight, thats why traffic moves slowly in that roundabout sometimes.

I've seen a fair few cyclists ignore the traffic lights and just cross into the main traffic though.

Where did you hear about the pothole being the cause of the accident. I could not find anything on the internet?

I heard there was roadworks on the roundabout that day but I could not see any in the pics.

The relatives and friends put all the blame on the escooter and wanted them banned.
3rd Sep 2019
Jellybeans:

That was a bit insensitive, I'd admit, but that was what he said.

I've been past that roundabout many times. It was redesigned in 2015. It is one if the safest roundabouts for cyclists I've ever seen.

There has been only one fatality by a cyclist in 2017.

It is a bit tight, thats why traffic moves slowly in that roundabout sometimes.

I've seen a fair few cyclists ignore the traffic lights and just cross into the main traffic though.

Where did you hear about the pothole being the cause of the accident. I could not find anything on the internet?

I heard there was roadworks on the roundabout that day but I could not see any in the pics.

The relatives and friends put all the blame on the escooter and wanted them banned.

If that's what the police said then fair enough. But insensitive of them.
I don't know the roundabout in question, just what I read at the time and heard on the radio. The pothole and rough surface was reported by LBC radio.
4th Sep 2019
Ordered at 9.20am on 3/9 and got a phonecall today telling me that they're out of stock. I find that hard to believe.
4th Sep 2019

It's only central London where you might get a warning. Everywhere else, they don't care. The police in central have been instructed to stop and warn, otherwise they wouldn't bother.
10th Sep 2019