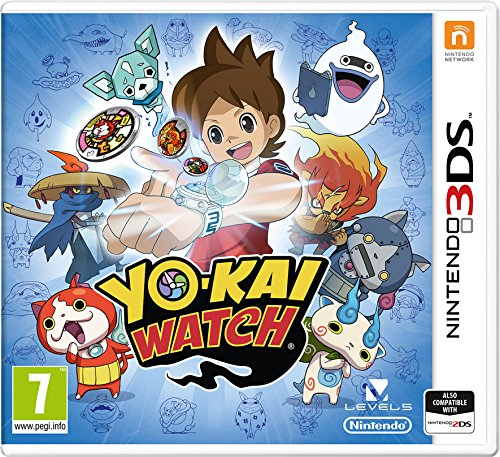 You can also select No Rush delivery to get £1 back.

Explore the vast town of Springdale, battle & befriend the mischief-making Yo-kai and help solve mysteries in YO-KAI WATCH. Exclusively for the Nintendo 3DS family of systems.

In Springdale there are mysterious forces behind everyday problems. From always feeling hungry to spending too much money or saying something mean accidentally, behind all these common problems there is very likely to be a mischievous Yo-kai to be found.

Yo-kai are charming, funny, outrageous characters that can be found everywhere, living in their own secret world from our own, and with a habit of causing a lot of weird problems for people – often with hilarious results!

To protect the town, you’ll need to assemble a team of six Yo-kai on your Yo-kai Wheel and call upon them when you need their help.

As the new owner of the powerful Yo-kai Watch, a watch with a lens that allows the normally hidden Yo-kai to be seen, you must solve the mysteries of the Yo-kai. Befriend as many Yo-kai as you can; with a little luck and some good tactics they can be befriended and relied on for help.

It takes more than just a strong party of Yo-kai to win battles though. You must have a smart strategy, as battling the powerful bosses is sure to keep even the most proficient players on their toes.

In the YO-KAI WATCH game, you will travel across a vast landscape, from mountain back roads to bustling city streets, meeting lots of different people and even some Yo-kai that will ask you for help.
PostTweetShare Share with WhatsApp Share with Messenger
Community Updates
Amazon DealsAmazon discount code
New Comment SubscribeSave for later
1 Comment
27th Jul
Unfortunately no rush only available if you buy £10 worth in one order