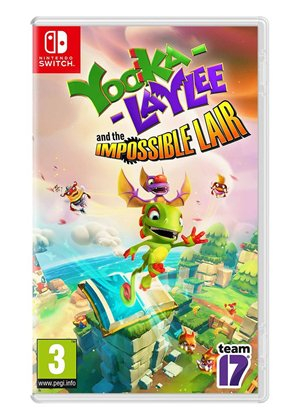 Yooka-Laylee and the Impossible Lair - Nintendo Switch £15.85 at Base.com

The title is a side-scrolling 2D platform game. The player controls Yooka, a male chameleon, and Laylee, a female bat, to complete various levels. In these levels, the objective is to collect quills and T.W.I.T. coins, as well as to free a member of the "Beetalion". The members of the Beetalion each give Yooka and Laylee an extra hit point for use on the final level. T.W.I.T. coins are used to unlock further progress on the overworld through Trowzer's "paywalls". Notably, it is possible to enter the final level at any point in the game, though it is heavily encouraged that the player first secure extra hit points by beating the other levels first.

The "Tonics" feature from the first game also returned. Tonics are potions that can modify the gameplay in numerous ways after it was consumed by Yooka Between levels, an isometric 3D overworld is used for getting around. Characters can be found and spoken to alongside puzzles to solve for quills and tonics.
PostTweetShare Share with WhatsApp Share with Messenger
Community Updates
Base.com DealsBase.com discount code
New Comment SubscribeSave for later
2 Comments
21st Sep
I always give this game heat when posted (is a regular 2 monthly post pretty much) as it's so much fun and represents great value. Not giving heat this time as is also regularly available and posted at cheaper prices.
24th Sep
Back down to the deal price ViewtifulCool‌