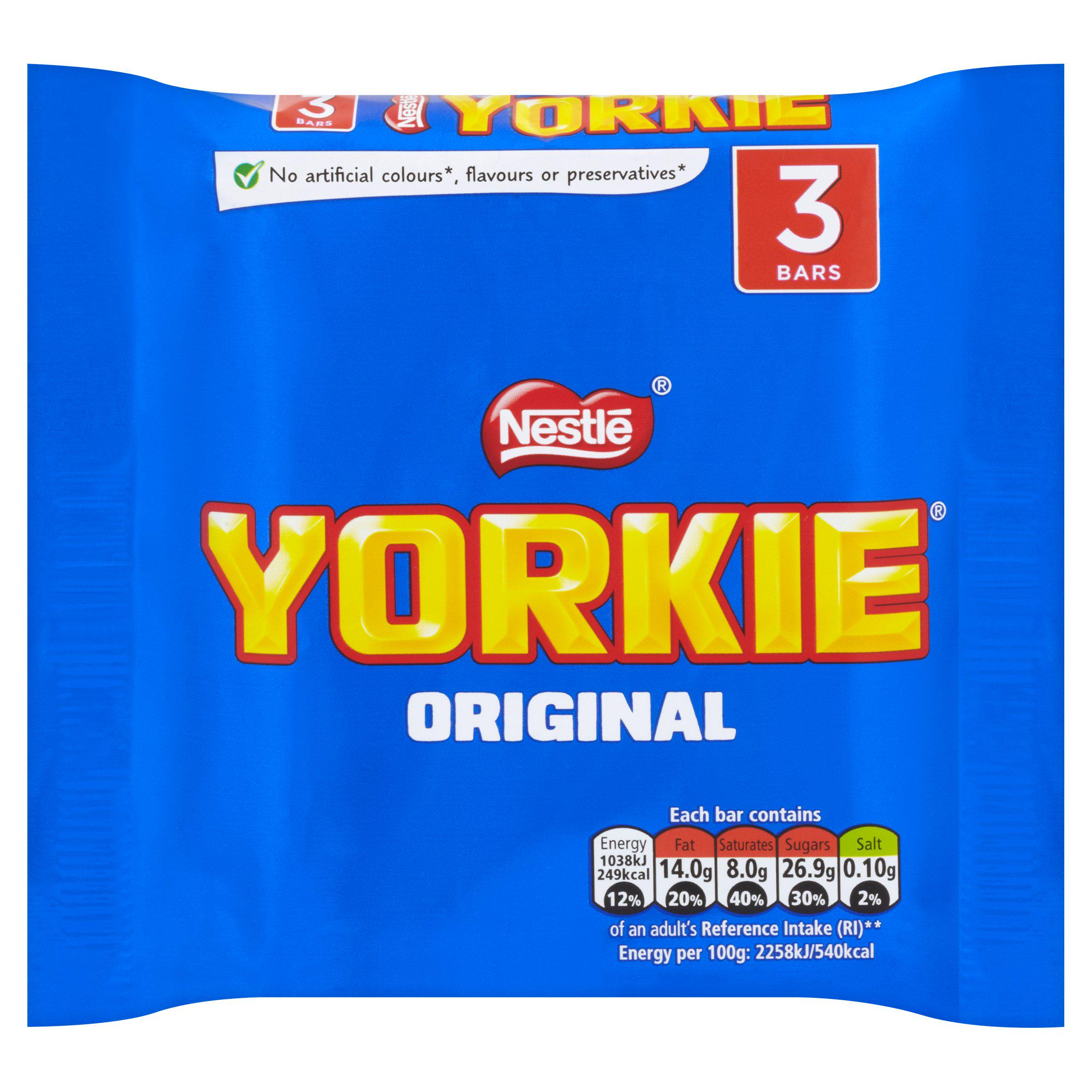 Please shop responsibly. As Coronavirus uncertainty develops, we are seeing a lot of community demand for basic household items. Please do consider others - we all need to work together to ensure everyone gets what they need. So please don’t stockpile, and perhaps offer to help older neighbours, family or friends by sourcing items for them.

No artificial colours, flavours or preservatives


A multipack of three YORKIE Original bars, five solid chunks of smooth, milk chocolate.
YORKIE chocolate evolved from a bar that was originally launched in 1924 under the name 'York Chocolate' as a single milk chocolate bar produced in York.
Throughout Second World War York Chocolate was the only chocolate Rowntree's continued to produce, it was produced as a plain chocolate with added vitamins to be sent to refugees in camps, or supplied for soldiers ration packs.
In 1966 York Chocolate was discontinued, then 10 years later in 1976 York Chocolate is re-launched under than brand name YORKIE, with its name due to it being manufactured at our factory in YORK where it still continues to be produced to this day.
YORKIE set out to be a chunky alternative to other rival chocolate bars and was advertised as the bar of choice of the long distance lorry driver in it TV advertisement with the caption "YORKIE - chunky milk chocolate".
YORKIE advertising continued the association with motoring through the 1970's and 1980's and other later tongue-in-cheek campaigns have consistently positioned it as the man's chocolate brand.
YORKIE does not contain any artificial colours, flavours or preservatives.
PostTweetShare Share with WhatsApp Share with Messenger
Community Updates
Sainsbury's DealsSainsbury's Discount Codes
New Comment SubscribeSave for later
8 Comments
22nd May
Good deal for men!
22nd May
Remember when yorkies were bigger than your face and needed a chainsaw to cut a chuck off 😝
22nd May
Cold...bought 24 for £8 on amazon recently.
22nd May

Can't tell if you're being serious
22nd May

Haha, been painting all day gone to my head. Much easier boxed and delivered to the door though tbf
22nd May
Original should have 7 chunks
22nd May

Yeah I used to like the Yorkie Easter eggs when I was a kid. The box was in the shape of a truck.