EDITOR 9
Posted 14th Jan
Well, amongst the controversy, animosity and downright scrappiness the 5G phoenix has risen, to lacklustre reception? (excuse the pun!)

5G has been deployed in the UK since Mid 2019 - and has been quite a staggered launch to say the least.

5G networks are the next generation of mobile internet connectivity, offering faster speeds and more reliable connections on smartphones and other devices than ever before.

Combining cutting-edge network technology and the latest high-specced devices, 5G should offer connections that are multitudes faster than current hookups, with average download speeds of around 1GBps expected to soon be the norm.

The networks are expected to supercharge Internet of Things technology, providing the infrastructure needed to carry huge amounts of data that allows for a smarter and more connected world.

Can we avail of 5G speeds right now then?

Yes and no. Firstly, you'll need a 5G compatible device. Due to the way 5G technology differs from 4G, devices need to be built with the new technology in mind. In recent months we've seen special 5G edition phones starting to hit the marketplace, but as time moves on and adoption rates grow, most handsets available will be ready to take advantage.

Secondly, you'll need to check your network of choice on whether they have deployed 5G in an area near you, and your plan permits you to get those sweet 5G speeds.

A few hurdles then? Absolutely. Like any new networking technology as the months / years progress adoption will grow massively, meaning 5G network availability will grow, and it will soon become the de-facto standard.

We are quickly transitioning into a wireless connected world, with speed no longer being a limitation, and we are seeing every industry imaginable recognising the advantages and wanting to adopt 5G technology into their roadmap for the future.

Latency is an underrated component of 5G and is often confused with bandwidth. When comparing latency to bandwidth, an analogy can be drawn to a freeway: bandwidth would be the size of your highway, while latency would be the roughness of the terrain you’re trying to drive over.

“With 5G, we’ll see latency less than 10 milliseconds,” said Derek Johnston, head of marketing and 5G business development at Samsung Networks. “When you talk about this ultra-low latency, it’s essentially a real-time interaction between things that may be thousands of miles away. It will allow for vehicle-to-vehicle type applications for autonomous driving and so much more.”

If you are interested in a full breakdown of 5G and its benefits, you can take a read of ofcoms update on the subject here

Will 5G cost me more?

Currently that is a difficult question to answer. Networks are currently allowing existing customers access to the network as they test scalability at no extra cost, but it is believed as adoption grows and the data demands for the average consumer grows, mobile networks may need to reassess how they charge for data, and whether the current pricing plans are appropriate for a new era which will see data needs grow exponentially.

OK I'm interested. What do my network say about 5G.

But wait! I need a device!

Search for 5G devices and plans
PostTweetShare Share with WhatsApp Share with Messenger
Community Updates
Misc
New Comment Subscribe Save for later
9 Comments
14th Jan
"Compared to 4G, latency for 5G is reduced by 5,000 percent."
So, does it mean it can predict the future ?
14th Jan
"...Latency is an underrated component of 5G and is often confused with bandwidth. When comparing latency to bandwidth, an analogy can be drawn to a freeway: bandwidth would be the size of your highway, while latency would be the roughness of the terrain you’re trying to drive over."

Perhaps it predicts that we are going to rename our highways to freeways, to compete with the information superhighway (that isn't free).

Alternatively, perhaps this infomercial (or hidden advertisement) for EE/Vodafone, Three, & O2 could have been written in the author's own words instead of copying from somebody else.


PS. I'm sticking with a 4G handset. When everybody migrates to 5G, the service will be so much faster than it is now!
Edited by: "fanpages" 14th Jan
14th Jan
Can't we have a 'Consumer guide' section for these information threads? There seems to be more and more of them appearing of late.
14th Jan

You could, of course, read the same text here: 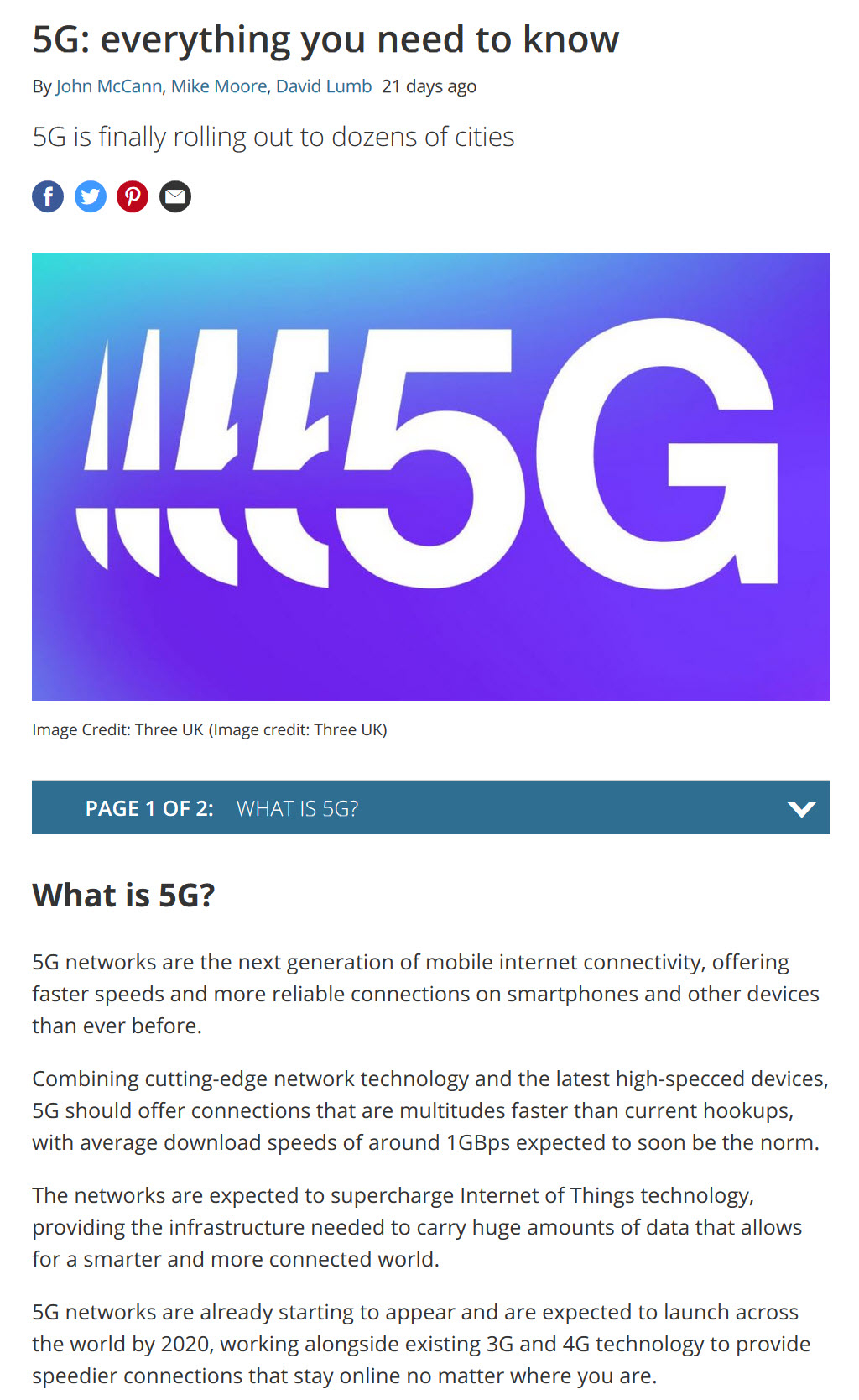 (At least you can see the credits for the original authors now)
14th Jan
Most reputable sources put actual 5G speeds at 100-150Mbps. The 1Gbps is some handwaving about potential future developments.

Given that the 4G rollout still has a long way to go with at around a third of the country missing 4G on some networks the idea that we'll all be on 5G in just a few years is absurd. As is talking about 3G in the past tense.

3G latencies can be a lot lower than 100-500ms. Here's my speedtest result for my current 3G connection:

That’s so much better than my Fibre connection at home. 😫
15th Jan

The link is already in the thread.
15th Jan

The link is already in the thread.

It wasn't 19 hours ago when I posted my comment.
15th Jan