Am I doing something wrong with top cash back?

15
Posted 16th Mar 2013
I've used quidco for a while, but had a few missed tracks, and they took ages to sort them - still had plenty that worked though.

I decided to switch to topcashback, but I've made 3 purchases so far and none of them have tracked. I know I can complain to try and get them added but I want to avoid that hassle!

So is there anything to try?

If I go to the "Your Earnings" page - The cashback by merchant is empty, but the clicks to merchants shows all the clicks out I've done - There is about 10 in there and of those I went on to purchase at 3 of the sites. The purchases were around £50, £100 and finally £50.

I am using firefox with Adblock Plus - could Adblock Plus be stopping the relevant information?
PostTweetShare Share with WhatsApp Share with Messenger
Community Updates
Ask
New Comment SubscribeSave for later
15 Comments
16th Mar 2013
The tracking info is showing so it should be ok. You could also lodge a missing cash claim to see if this helps.

If it's only recent then you might find it will take a while, they generally have to be conirmed then are pened until payable. Some companies take upto 90 days. M&S, Boots, BHS, Bodyshop show quite quickly and ebay isn't too bad. If you get the thank your visit has been recorded you should be ok.

You need to ensure you are not blocking cookies. Check the settings of you ad blocker to see if it is blocking the cookies. Make sure the last click is from the site and not any other source. If the transaction doesn't track raise a transaction query as it will be submitted for the merchant to review. Some merchants cannot offer real time tracking (this is very rare believe me as I work in the industry).

none of them show at all other than in the clicks to merchants page. It is like the tracking info doesn't get back to them.
16th Mar 2013
Did you go to a voucher code site or click on any sponsored listings in Google after you visited TopCashBack? If so it is possible that it tracked to a different source. If not, then you need to raise a transaction query. Which merchants are you expecting to see transactions for? I only ask as I may be able to help you further if the merchant is affiliated with the company I work for.
16th Mar 2013

Nope straight there and then purchased.

I've just tried the missing cashback claim bit for the £100 purchase on the 18th of Feb but I get so far through and then it says:

16th Mar 2013
Well I've sent a support ticket for that one, and filled in a missing cashback claim form for the other one. Don't think I can do the one for yesterday for a week or 2.

Will try a different browser next time with no ad blocking
16th Mar 2013
You should be able to submit the claim on Monday. Sometimes you have to wait 30 days. If you do have further problems, e-mail me ***********.com with the merchant and order reference and I will see if I can help you.
Edited by moderator: "email addy removed, use the PM system" 16th Mar 2013
16th Mar 2013
The three merchants were:

smyths toy store - submitted claim
carparts4less.co.uk - couldn't submit claim so have contacted support
burton - was only yesterday so won't claim yet
16th Mar 2013
not an expert on this but suspect clicks to the merchant are shown because you clicked from the TCB site, as for tracking purchases if you have blocked cookies then thats why no tracking, could be Adblock Plus doing this.
If you are having problems with Quidco & TopCashBack then the problem is probably your end.
Try this Test tracking
16th Mar 2013
I might be able to help you with Burton. That should track quickly.
16th Mar 2013
just do it the easy way and no faffing with cookies

use an alternative browser ONLY for TCB / Quidco (I save them as my home pages in IE). My main browser is chrome.

Cookies are enabled, thanks for the link to the test, when I press the button I get:

"SUCCESS: Your tracking appears to be working okay!
You should also consider using the extra merchant test in step 2 below."

The test in Step 2 also works.

So all looks good from there.

I might be guessing wrong with the adblock but it was the only thing I could think. I never use chrome but have it installed so will use that next time.

Quidco works most of the time - I just had a couple which didn't track - but I guess that is normal? I had many, many more which did track.

So far 3 purchases on topcashback and not one has tracked!
16th Mar 2013
Clear all your old cookies/browsing history first and then log in and proceed as normal.
16th Mar 2013

such a pain compared to just having a separate browser specifically for tcb/quidco and have them set to the home page and have it set to auto delete cookies etc when you close it.
16th Aug 2017
When they work, Topcashback & QuidCo are amazing websites.

The problem is, even if you follow their guidelines, you clear cookies and so on before making a purchase, their reliability is hit-or-miss. And when things go wrong, there's close to nothing that can/will do about it.

Today is my 1-year-anniversary of waiting for a £120 cashback from Iberostar from TopCashback. TCB's own website admits that Iberostar are terrible payers, I've complained to them about it, but they refuse to remove them as merchants.... So plenty of other customers will get the same lousy service.

At least QuidCo gives you the option to leave reviews about how appalling a particular merchant is. 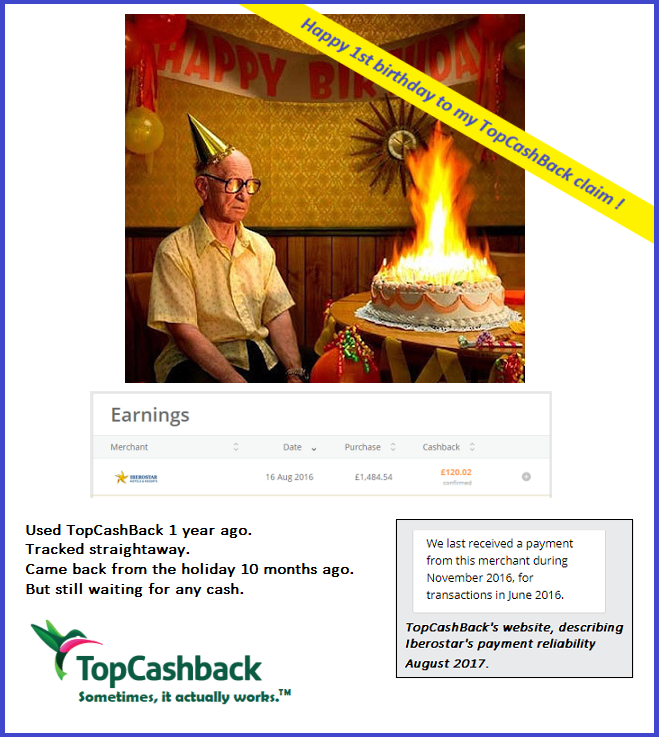