Amazon delivery due today not dispatched?

26
Posted 14th Nov 2017
So on Sunday night I ordered 3 things with next day delivery (which obviously means a Tuesday delivery date).

Today they were supposed to be coming and I checked just now and it says they haven’t been dispatched!

They can only arrive before 8pm according to what it says, and that’s it. I was wondering if anybody had similar issues and if theirs ended up arriving?

If mine doesn’t arrive, would I be able to ask for delivery charges back or would they likely decline?

Obviously it’s rather annoying because they are meant for something else that arrived from Argos today.
PostTweetShare Share with WhatsApp Share with Messenger
Community Updates
Ask
New Comment SubscribeSave for later
26 Comments
14th Nov 2017
I had the same problem yesterday.

Chat to them via live chat, and if you're a prime member, they'll offer you a 1 month extension on your account, or a £5 gift card.
14th Nov 2017
Lot's of this happening at the mo, Amazon seem to be trying it on & seeing if people complain. I ordered with Prime with guaranteed next day delivery on Friday, email very early Saturday to say delivery was now Monday - moaned and lo & behold it was delivered on the Saturday.
14th Nov 2017
I've had delivery issues in the past, I suspect the drivers sometimes skip me intentionally and don't report it as a failed delivery.

At one time it was so bad I got my subscription extended by several months, the worst time was when they reported it as delivered only to give me the item a couple of days later after they sent out a replacement (meaning I then had to return one).


I only occasionally use next day delivery now and instead opt for the 'saver' delivery and get it sent to work (basically making back my subscription).
14th Nov 2017

I did so and they said they would add £5 to my account, only they never did so now have to contact them again parcel got stuck at the delivery centre place apparently. Not happy at all as amazon was the only place I could find what I wanted and paid extra for it to arrive on time
14th Nov 2017

That’s what I did!! Next day delivery and they make it take an extra day instead. Not even been dispatched yet
14th Nov 2017

At least they emailed. I wasn’t emailed at all, and it was only when I realised that they hadn’t emailed me delivery confirmation that something was up and it said it hadn’t dispatched! Still is saying expected today even though that’s a load of bs now because I contacted them
14th Nov 2017
I had problems last week, same issues. They just gave me £10 amazon credit, but cannot find it on my account
14th Nov 2017 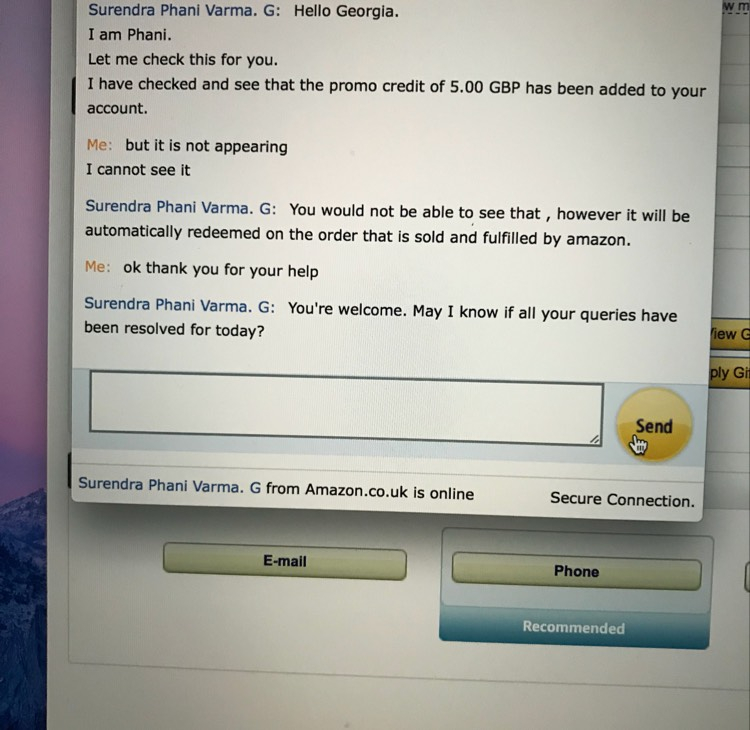 So what extra benefit does using saver delivery give instead of the next day, I just got prime but always select next day
14th Nov 2017

If I need something the next day I may still try the next day (pray?) delivery, but if it's something I don't urgently need I'll usually take this option.

Amazon's delivery service got so bad that you wanted to extend your subscription for several months?

It's things like this that make me think Amazon Prime customers really are the battered wives of the consumer world.
15th Nov 2017

I use prime for other things e.g. video, I regularly buy things which are less than £20 and as I said I stopped relying on next day delivery.

I basically earned back the cost of my student prime this way either through credit or postage costs.

To be fair, for the more recent occasions i tried next day, they did deliver.
Edited by: "tech3475" 15th Nov 2017
15th Nov 2017
I find having things delivered to an Amazon locker is often more likely to result in a next day delivery. That said, it's only convenient if you have one nearby - I prefer them as I don't have to wait in for Amazon man to turn up and it means they don't bother my neighbours with stuff if they turn up in the 30 nano seconds I'm not available to answer the door
15th Nov 2017

They said it’s on the gift voucher section which should be there if I order something
15th Nov 2017
I just received my order today. Two hours earlier than normal time I’d get amazon parcels, so of course I almost missed it (the car had just been parked when we saw the amazon delivery man starting to return to the van because none of the neighbours were in)
15th Nov 2017
I had the same problem and was told that I had been given a month's extension to my prime however the renewal date on my account has not changed. Can anyone who has received this credit confirm how it shows on their account please.
1st Jun 2018
I've had this problem myself which was never resolved and the Prime option is complete joke in 2018.
I have no idea what happened to my parcel and i never got a refund after multiple conversation with customer support.
After that day i decided to close my account there and work only with Ebay as at least there you can contact the seller directly.
This wasn't my first encounter like this on Amazon and from what i learned is that Amazon is the complete opposite of Ebay. If Ebay was designed to work more towards the customers and buyers than Amazon is the kind of company that protects sellers from customers. If you can contact the seller directly on Ebay to resolve your problem than on Amazon there is not even such option, you have to go through bureaucratic Amazon customer service and they will send you an email that they will fix the issue when in reality nothing is done.
1st Jun 2018

Today is a bank holiday so you'd expect it to be dispatched tuesday for wednesday delivery.
27th May 2019

A bank holiday weekend and people still expect deliveries to be as normal.
Unbelievable
27th May 2019
Comments on a discussion that’s 18 months old? Blimey!