26
Posted 17th FebEdited by:"radioagogo"17th Feb
Over the last few months, I have returned two mobile phones to Amazon UK because I didn't like them.
They were returned swiftly and well packaged.
Both times, I had to chase up refunds, which I must admit, were then paid swiftly and without question.
Now, I've had an email from Amazon telling me the last mobile phone return was JunkInPackage, which I gather means there was no handset in the packaging. I definitely included it.
The email hints this has happened before and - not quite but nearly - accuses me of trying to defraud them.
I should add, I buy a lot of stuff from Amazon and have been a customer for 16 years. I've also had my share of returns, but this is the first time I've had a major issue.
Seems to me, Amazon has a bit of a problem with returns going missing after they've been sent by the customer and from what I gather mobile phones are particularly targetted.
Anyone else had this problem?
PostTweetShare Share with WhatsApp Share with Messenger
Community Updates
Retailer Offers and Issues
New Comment Subscribe Save for later
26 Comments
17th Feb
Lesson 1 - do your research before buying.
Lesson 2 - if you still unsure about it see the product in some store and if store can't price match then buy online and be happy.
And yes, there are plenty of scammers and unfortunately you did fit that profile for Amazon on this occasion. I don't understand why are you surprised. common sense from company's point of view.
Edited by: "senukas" 17th Feb
17th Feb
You are lucky you get a refund at all.
Most retailers will not give you a refund for a used phone just because you do not like it.
17th Feb
I agree Amazon customer service is usually excellent, which is one of the major reasons I shop there.
The option to accept returns is Amazon's decision and I'm sure it works well for them and attracts many buyers who might shop elsewhere.
And I have broken none of Amazon's rules.
I really resent being virtually labelled a fraudster after sooooo many years and sooooo many purchases.
17th Feb
I bought 3 items recently from Amazon including sweets and a £170 Phone. The phone was missing from the parcel. This is the first time this has happend to me and Ive been a customer for around the same amount of time as you. Ive had items that were stated as delivered but not turned up but this was the first time a parcel was actually missing a valuable item.
17th Feb

I agree with both your Lessons. I have bought - and kept - several phones from Amazon. In this case, there was no High Street store that stocks the phone so I couldn't try it out.
17th Feb

I think Amazon is getting a real problem with valuable items going missing.
17th Feb

I wouldn't worry about it. Its a standard message generated to help prevent fraud.
17th Feb
Hee hee...I might be angry, but it hasn't stopped me buying from Amazon. Just ordered a laptop. Really hope I don't want to return it
17th Feb

I would be a little bit careful if I were you. Amazon have banned people as a result of returns before. There was a thread on here a couple of months back
17th Feb

Yeah...I've heard they'll ban you if they consider the number of your returns exceeds their 'reasonable' limits.
But to be honest I don't returns much stuff at all.
I have a feeling the email I got wasn't just standard, I think it was automatically produced. I replied to it, and just got another template email.
Still don't like the fraudster label. But I take your point about being careful.
17th Feb

But the only alternative to a genetic letter/email would be hand typed individual responses which is never going to happen unless legal issues occur. Just ignore it.
17th Feb 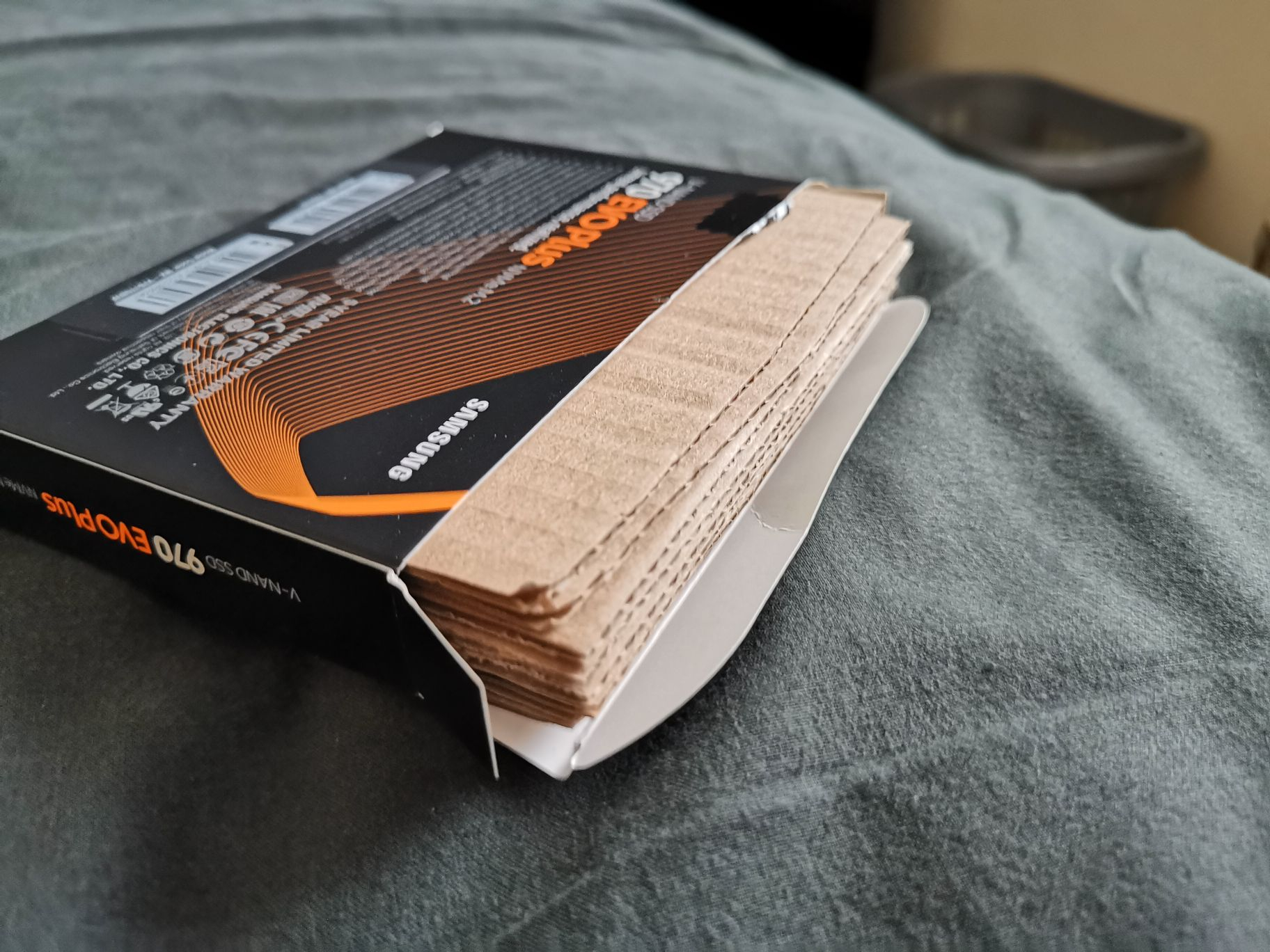 I received this in place of a samsung 970 evo plus ssd, they sent me another free of charge next day, after checking reviews on the ssd i found many others recieved cardboard, polystyrene filled boxes
17th Feb
Just ask Amazon for its standard "declaration of truth" form, complete it, return it and job done, unless the declaration morphs into a mobile phone en route, which is kinda unlikely.
17th Feb

truth is, amazon say you can do this sort of thing, they don't tell you there is a algorithmic limit to block you as a customer when you reach a poiny where they are losing money from you.

Best thing to do is get to the limit of them threatening then download all the invoices and ask them to delete all your data, wait few weeks and make a new account, rinse and repeat.

I like amazon for no fuss returns, people moan but there is a boat load of crap on amazon, reviews are fake, just look at facebook marketplace ads everywhere from sellers asking to review there amazon product in exchange for money back to paypal.
17th Feb

You are entitled by law to return items purchased over the internet, or phone from an online retailer if you are unhappy with the product.

Sorry but I thought you cannot return mobile phones or laptops once activated unless they are faulty.

The license key on a laptop is held with the manufacturer, not you. You don’t own the license (which is why your Windows installation isn’t transferable).

Mobile phones are not activated. Their sim cards are and that is with mobile phone providers. Not sellers of sim free phones. You can test phones without sim cards.
17th Feb

Thank you for clarifying
17th Feb

Thank you for clarifying

Also check out (sic) "Section 75", another wonderful example of consumer-friendly legislation dating back to 1974.
17th Feb
I sent back a Microsoft Tablet to Amazon Italy and they claimed they never received it despite it being signed for. Eventually got my money back after a few weeks of hassle. Returned an Oculus Go, collected by Hermes and never got further than the depot, they refunded that straight away.
18th Feb

Online cover is a massive reason I never shop retail, going into a shop complaining with some of the excuses you get away with online would be embarrasing.

Truth is, unlike instore where you can see the product there is a lot of crap products on amazon hiding through fake reviews which was gained by paying the buyers back via paypal
18th Feb

Indeed, that CEX policy of 2 days wil be there own. If not for that policy, they aren't otherwise legally obliged to offer any returns for change of mind when purchased in store. Unless faulty of course.

And yes i agree, you get 14 days to make sure you are happy that the goods are merchantable quality, there is a lot of rubbish and fake goods online.
Edited by: "Jace_Phoenix" 18th Feb
18th Feb

Do they legally have to delete all you're data? I'm assuming you have to quote GDPR? or something along those lines?
18th Feb

They can keep some info for legal reasons but it does not affect you creating new account, you asking them to delete your account isnt them banning you, you are aloud to open a new account if you want,

It would only be not aloud if they was to say you have to contact to reopen an account, but amazon can't do that.
18th Feb

I've heard of people getting banned for to many returns and people trying to open new accounts and Amazon closing the new account down. I think they blacklist the address and name
18th Feb

Closing and opening a new account is utterly pointless and wouldn't get around their ban hammer. If you move to a property where the previous resident was banned from amazon, you'll find it extremely difficult to open a new account as they'll refuse to engage with you. Their site, their rules.

If Amazon ban you, thats it, game over. You can request data to be deleted but that doesn't trump their need to hold data by law, such as for tax compliance, and they could well argue on keeping data indefinitately if it protects them from fraud.

Don't take the p!ss with returns and you'll be fine.