Any bricklayer, builders around

20
Posted 4th Jan
basically I have had some work done on my house had the bay windows rebuilt, they have done it as a repair rather than a new rebuild, the property had no cavity gaps, and intially builder said they would be adding a cavity and insulation in the walls.but then bricklayer said he can't do that as original didn't have it and brickwork wouldn't line up I thought fair enough as in one said the bay is in triangular brickwork and other bay is square I assumed he would at least add a cavity to the reqtangular bay but he hasn't done it in that side either. The other issue i have is the side which had the reqtangular bay was built as 1 brick width width upto around 7 courses then it went too 1/2 brick, width , he has rebuilt it the same I am concerned that the 7-8 courses built as single layer of brick will crack again is this correct or will it not matter. 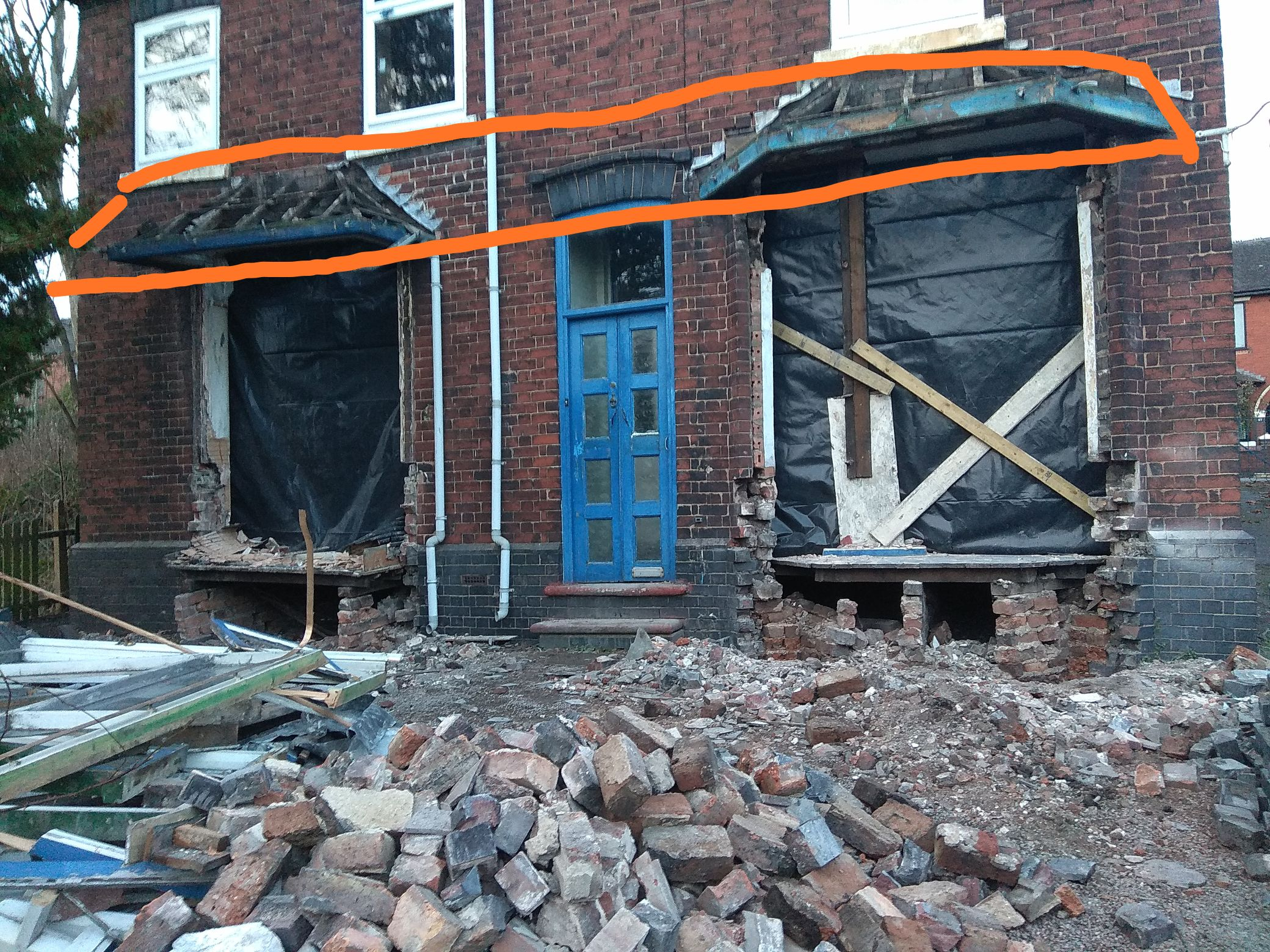 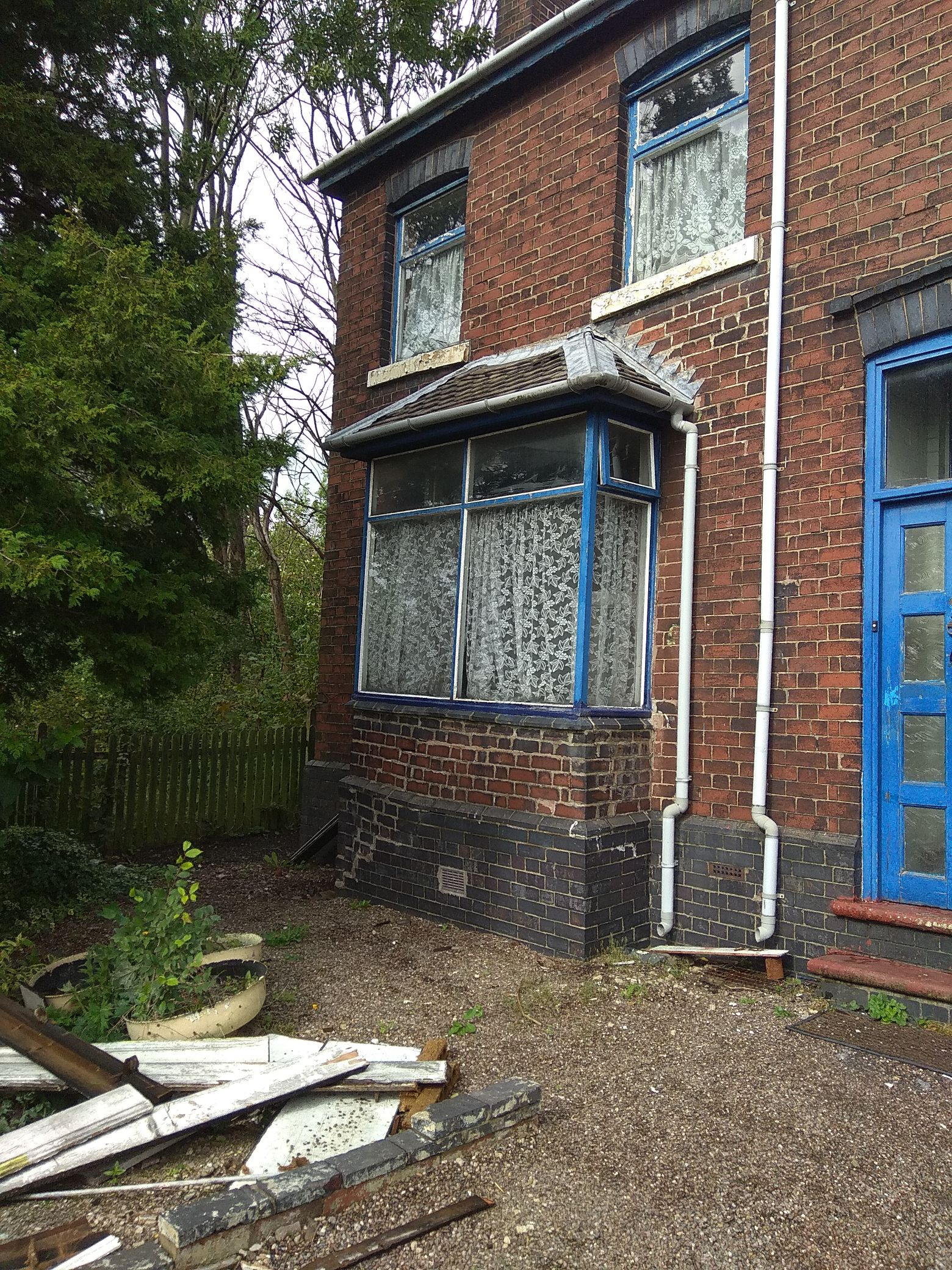 This is how it was initially
4th Jan
I’d recommend trying reddit for some advice if you haven’t posted on there. There are dedicated subreddits where many responses can be had from qualified builders that can hopefully provide you with some clarification
4th Jan

Ok thanks never used Reddit will try it if I don't get any good answers in here.
4th Jan
The brickwork should not crack again as long as it's been rebuilt correctly. The 1 brick thick wall would need to be made an extra 50mm thick to achieve a cavity which would mean repositioning the brickwork and more work involved. For the amount of area of brickwork you are talking about insulating that would not have made much difference anyway as most of it is below the floor level aswell. You could build a stud work wall on the inside.
Edited by: "matthews9479" 4th Jan
4th Jan
Did he dig out and deepen foundation to rectangular window detail? Looks like historical subsidence.

In terms of the brickwork. They could easily insert a cavity. In terms of insulation then just line internally with phenolic lined plasterboard.

Looks like your suspended timber floor is uninsulated. Best to get that done and check stability of dwarf walls at same time. I've seen some horrors under floors where tradesmen knock away very large gaps!
Edited by: "greenyblades" 4th Jan
4th Jan

What do you mean by dwarf walls the ones supporting the floor yes they were in bad shape they fixed on side and haven't done other side properly, builder says joiner will sort it out I don't have high hopes though the new brickwork looks terrible I just went see it.
4th Jan 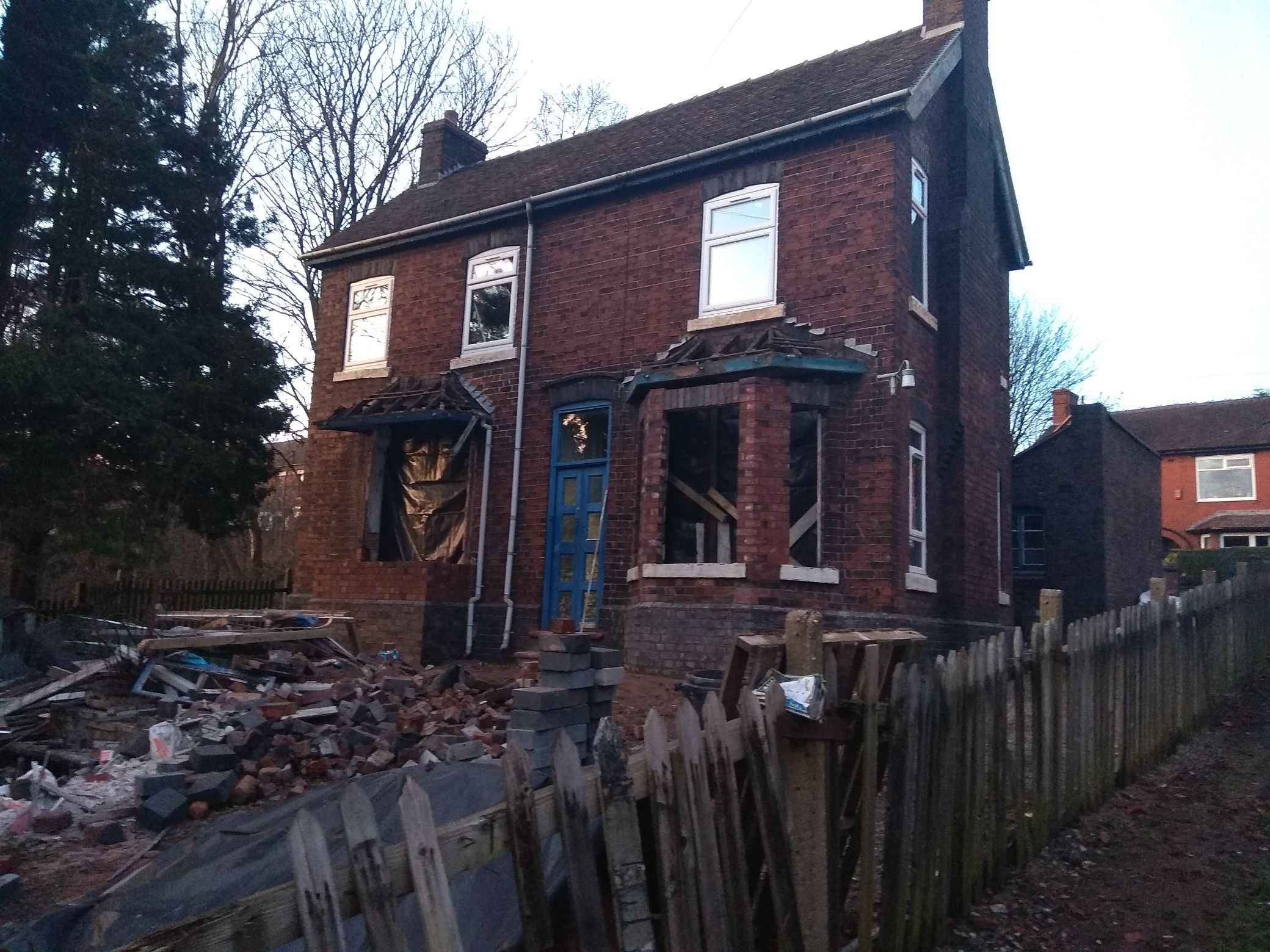 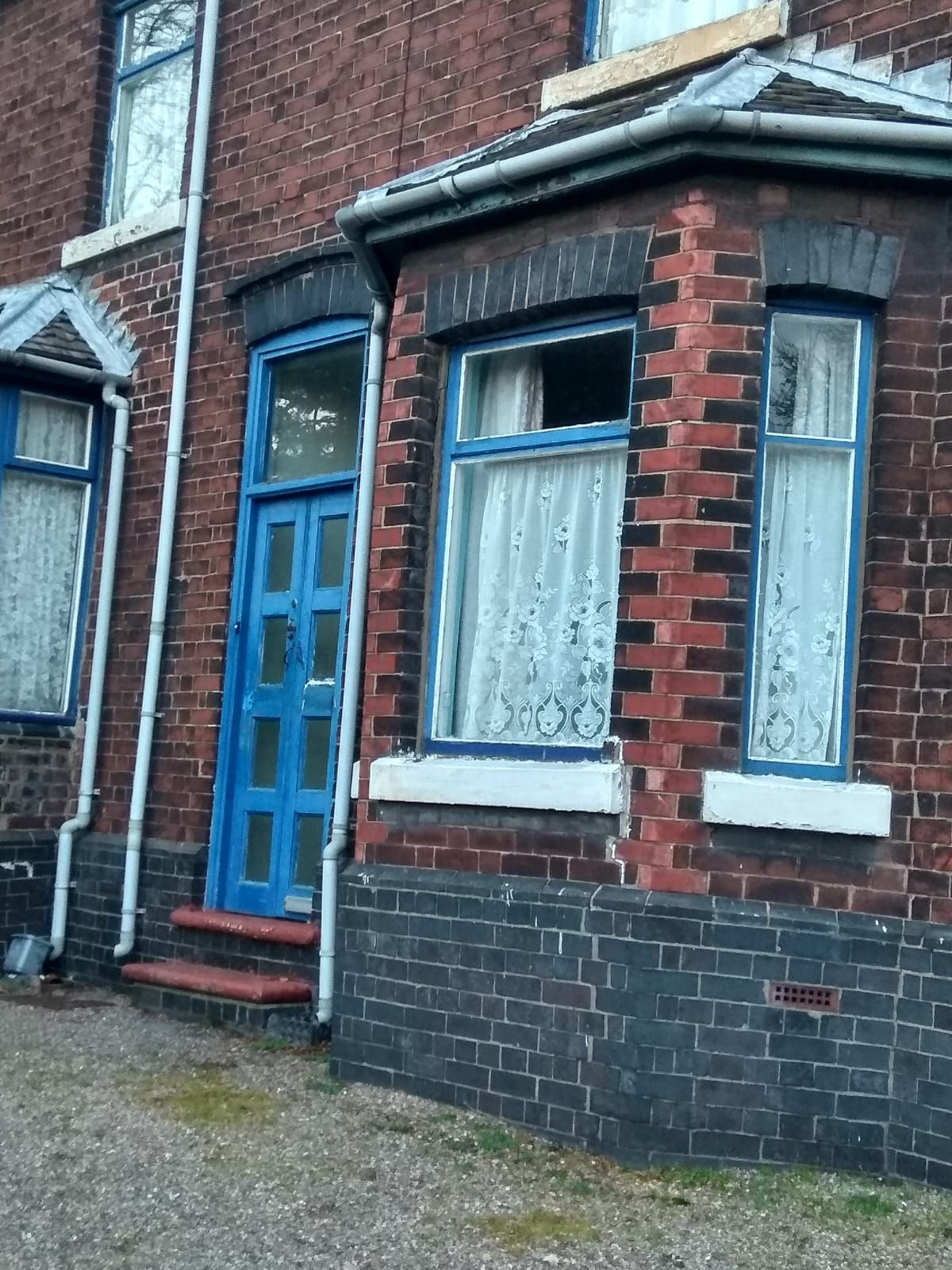 Vs old one really regret having it done it wasn't too bad in first place .
4th Jan
Doesn't look too bad. I can't see any fresh air inlets (small bricks with holes). These are essential to ventilate under timber floor.
4th Jan
Looks like a handful. Do you know any local building surveyors? Or is there a local university which may have 4th year students who could help you out?
4th Jan

I've had the architect look at it, and sent some photos too a surveyor apart from the bays. It does have some cracks in another wall but it not too bad have had the roof done, the plastering is getting done it was built sometime around 1870s or there abouts so think it should be ok. Yes it's a big project I got too do a extension on the back. Problem I am facing is getting a good bricklayer.
4th Jan

They put it on other side it's there. But can't see in photos.
4th Jan
I recently bought a house that was bay fronted, the downstairs had a few cracks in but the survey said it’s historical and nearly all bays are prone to cracks of some sort , I just had them filled and replastered , I’m renovating so I’m in the same boat as you and there’s nothing stressful that having shaky like this in your mind day and night figuring out what’s best .

Hope you get it sorted
4th Jan

The most stressful part is getting work men in who disappear for ages then do a completely different thing than they alyave said. I am going too try and do most stuff myself and probably best if I employe people on small projects instead of giving them a big job like the mess about on this job. It's been about 5-6 weeks which they said would be done in less than a week.
4th Jan

I assume no money as changed hands ? It's amazing how fast a job can be completed when there's money waiting
4th Jan

They got most of there money already unfortunately. I don't Keep money from people like that.
4th Jan

That's why then they have lost interest they have your money now. I don't pay up front to builders etc, if they do demand it then alarm bells start ringing or they have a cash flow problem.
4th Jan
The bays look like they sunk do due either movement of the house or they where built on bad footings.
Rebuilding on the same footings doesn't give me much faith in it not happening again. 🤞
Also try sites like mybuilder where trades try harder on not to get bad feedback so will concentrate on the job in hand.
The brickwork doesn't look to bad , not perfect but then it comes down to how much you have paid. Not many builders like restoration work.
Edited by: "kash2013" 4th Jan
4th Jan
I don't think cavity insulation would made much difference to such a small area of the wall. Have insulated plasterboards fitted to the internal wall. And you should have got the double glazed units fitted into the wooden windows. That would made a little difference. But always better to ask questions before you start the job.
5th Jan
I think I'm looking at the old pictures of the windows I have just noticed you have upgraded the windows to uPVC upstairs. I'm guessing you will be having these installed downstairs to.
Don't ever in the future pay ahead of the work. Always agree a stage payment.
5th Jan

The builder was off my builder unfortunately seems they don't really care. They guy was new on there I thought I'd give him a chance as everyone needs too start somewhere, he was a older gentleman and said he knows what he is doing been in building trade for 30 + years. I think I will just have too take this as a big learning curve.
Edited by: "MynameisM" 5th Jan