I wanted to get feedback from community on your experience with Calgon and does it claim what it says on the tin. If you are using alternative please recommend and share your feedback.

Just run it on an empty wash?

Yes 90 degree wash or 60 degrees. It will also save your seal from going mouldy.
13th Dec 2019
One option is to replace the element yourself when it fails, it is a very easy 5 minute job. I've replaced the element in my current machine twice in the last 9 years. Cost me £20 for a new element made by the same element manufacturer and with same rating as the Zanussi original.

Both times the element was virtually free of limescale deposits, as the expansion of the element tends to cause any buildup to flake off. While I had the element out I had a good look through the hole and the inside of the tub and the outside of the stainless steel drum were completely limescale and sludge free and the drum was still nice and shiny, unlike the washing machines in a Calgon advert.

I live it a very hard water area and never use the stuff, never had to replace the element in my previous machines, probably because they had a hot fill.

Every couple of years or so I run it empty on a "boil" wash with some citric acid instead of powder to descale the washing machine sump.

I'd suggest looking into a whole house water softener unit, if you are concerned about limescale, quite expensive, but would also reduce your detergent and soap usage, I'd like to get one myself to cure the soap scum deposits in the shower, but don't plumb it in to the kitchen tap, because sodium isn't good for you.

You can get manual water softener units for individual appliances, which are sold for use with commercial warewashers and coffee machines, they look like a fire extinguisher and have to be filled with salt water from a jug then flushed through with fresh water, every few uses (depending on the size bought and water consumption) by turning some taps on the side. A medium sized one I bought for a pub's glass washer, cost me about £60 - £70.
Edited by: "melted" 13th Dec 2019
13th Dec 2019

You can buy anhydrous citric acid on amazon or ebay quite cheaply, looks like from from about £5 - £6 per kilo.

If you intend using it for descaling kettles as well, make sure you get food grade and be selective of supplier.
13th Dec 2019
I use dripak epsom salts (half a bag in drum with a bottle of white vinegar) every 5/6 months on a 90deg cycle.. leave the door slightly ajar after every wash too. Never had a prob and our water must be the hardest water around! (Thames Water)
13th Dec 2019
The cost of Calgon adds up a lot over the years so I stopped using it a few years back. Never had a problem and glad I still didnt keep paying for it. Its only the ads that say its worth it not anyone using it

It is best to use a powder detergent and to also do a boil wash (or 60°C +) every few months to kill off mould. I usually find some towels or floor cloths to wash.

Powder detergents usually contain oxygen bleach, which while it is there to remove stains, also tends to kill mould growing in the machine.

Liquid detergent or liquid tabs usually don't contain any oxygen bleach, because in liquid form it would break down the enzymes and other active ingredients in the liquid. Liquids also tend to leave a gel like residue coating the inside of the machine after the wash which holds moisture, creating a nice environment with a moist surface for mould spores to grow in.

If you must use liquids, do an occasional wash using powder and more frequent boil washes, preferably with powder, although keep an eye on the machine if you've not done one for a long while as you may find it foams up badly during the boil wash from the coating of liquid detergent dissolving off the insides of the machine.

Fabric conditioner also seems to promote mould growth at the back of the draw, which can result in blocked and diverted water jets sometimes causing the powder or conditioner to be left in the draw, or even water to run out the front. I remove the draw and use a steamer and a brush to clean the compartment up if it gets really bad.

Leaving the door and draw part open when not in use will help to dry out the machine to reduce mould growth.
Edited by: "melted" 14th Dec 2019
14th Dec 2019

Never use liquid detergent. Poor at washing clothes vs powder. Powder has bleaching agents in so keeps your machine gunk free too.

Aldi or lidl powder is very cheap & top rated too.

Dr. Beckmann Service It Deep Clean Washing Machine Cleaner. I agree with what said about Calgon above. Waste of money.

Our Siemens washing machine comes up with a message every 30 cycles to run a 90C cycle to clean the machine. Some other tips I can recommend is to completely remove the drawer and to leave the door open when not in use to prevent mould.

I also clean the roof of the drawer compartment with a scrubbing brush, Flash bleach spray and a handheld steam cleaner. I then run four separate 90C cycles with bleach, white vinegar, soda crystals and Dr. Beckmann Washing Machine cleaner every 3 months. It may sound excessive but it really keeps your machine in tip top condition.
Edited by: "DistortedVision" 14th Dec 2019
14th Dec 2019

Time to stock up

That's typical price tbh. I also Dr. Bechmann Service-it which is a gel: 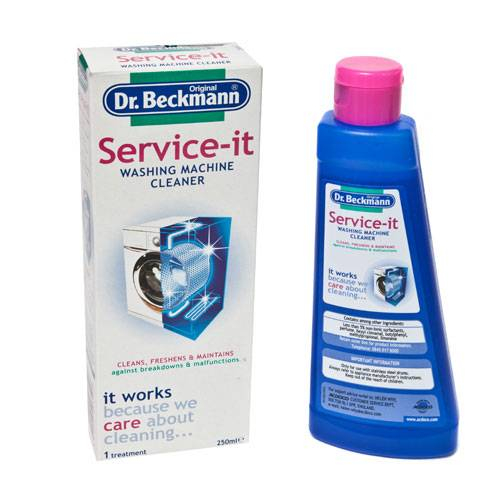 I thought we add liquid conditioner to give it that fresh smell?
14th Dec 2019

I thought we add liquid conditioner to give it that fresh smell?

Main active ingredient in that is citric acid (msds:- dr-beckmann.co.uk/wp-…pdf )

Looks great. How much and how would you recommend using it in a washing machine and kettle? Thanks
14th Dec 2019

I'm probably a bit heavy handed, I bought several kilos a few years ago at a very good price.

For descaling a kettle, I add between 1 - 3 tablespoons to a kettle after it has boiled, depending on how badly furred up it is and how much of a hurry I'm in, leave it to work, then rinse and repeat as necessary.

I'd typically use about two thirds of scoop to clean my washing machine, although I have used considerably more once when I found fragments of limescale that had flaked off the element stuck in the pump trap, but it would probably be best to use a similar amount as you would get in a packet of the commercial products, such as bechmann's, also don't leave any type of acid sitting in the machine overnight to avoid any harm the rubber pipe work and seals.
Edited by: "melted" 14th Dec 2019
14th Dec 2019

Thanks for the tips. Will be ordering the 2kg from amazon. I assume you do the washing on a 90c wash but think I'll try it on a 60c daily cycle as that's 2 hours quicker than a 90c cotton wash.
14th Dec 2019

Yeah, I use the 90° cotton wash, but on my machine its a reasonable length wash, it does have some water saving eco washes, but I never use them as they take so long.
14th Dec 2019

Thanks, you got a link?