Does this mean my Hermes parcel is being returned back to me?

19
Posted 10th Jan 2018
I placed an order with Zalando and have requested a return, I’ve put the label on the box and left it at a local shop for collection. Hermes collected the parcel and now it says to be returned. Is this to me or to Zalando, I’m assuming me but no reason stated. 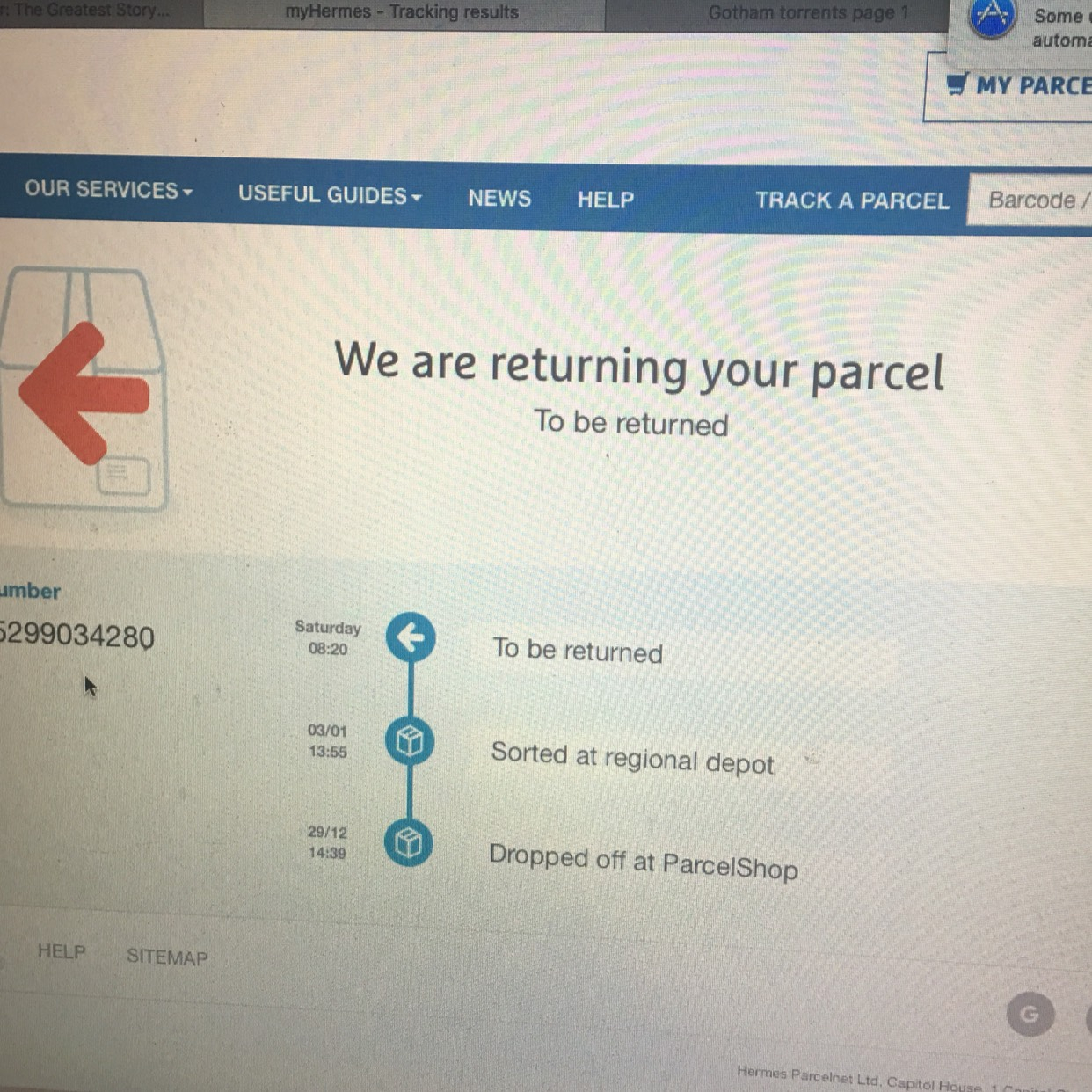 PostTweetShare Share with WhatsApp Share with Messenger
Community Updates
Ask
New Comment SubscribeSave for later
19 Comments
10th Jan 2018
I had the same message from Hermes about a return to Amazon. It means they are returning your parcel to the retailer not to you.
10th Jan 2018
I had same issue. While going through with Parcal2go and myhermes. Turns out there was 2 different tracking numbers on each site. Was showing me the wrong person or wrong info on one site.
10th Jan 2018

Ok thanks, I thought something was up with the parcel and it was coming back to me. They should re word it for numptys like me. They collected it on the 2nd January. Been 12 days so far since I dropped it off. Don’t know how long it will take to reach Zalando then I have to wait 3-5 days for a refund
10th Jan 2018
I called them to ask what the hell was going on. I’m sure many others would have raised the same question too. The wording of their tracking status page is awful and really needs updating.
11th Jan 2018
Is it perhaps that the postage for the return is being paid by the retailer and therefore the information on screen is aimed at them, and their parcel is indeed being returned?
19th Mar 2018

I had to look for an answer to this, too. I am using one of those "recycle your stuff" places and thought the parcel was being sent back to me. Thoroughly annoying wording.
1st Sep 2018

The message is being shown to the person with the tracking number, and that person is the person who is sending the parcel.

It's not relevant who is paying the postage, what matters is the direction the parcel is travelling. Returning a parcel means sending it back to where it came from, that would be the logical understanding of the phrase.

I have used Hermes to send a parcel to a company I was selling some stuff to. The company paid for the postage under their arrangement with Hermes. I just dropped off the parcel at a collection point and was given a parcel number / tracking number.

Bear in mind the parcel did NOT come from the company I was sending it to. It had NEVER TRAVELLED ANYWHERE before I sent it off to them.

When I used the Hermes facility to track the parcel's whereabouts a few days later, it told me "We are returning your parcel". This made me anxious as to what was wrong. Why are they sending it back to me???

It turned out it did arrive with the company I was sending it to. So it appears that Hermes are using the expression "We are returning your parcel" when what they actually mean is "We are sending it to the address shown on the parcel".

I can understand that if a company use Hermes to enable customer returns to be sent back to them then "We are returning your parcel" makes sense, the meaning being the item is being returned to the seller, having first come from them.

However, the phrase only makes sense in that context. Where someone is sending off a parcel that has never travelled anywhere before, and they are shown the message "We are returning your parcel", the only logical meaning this phrase can bear is that the parcel is being sent back to the person who sent it off. Which is likely to cause anxiety to the person who sent it as to what has gone wrong.

Hermes are idiots for using this wording.
10th Sep 2018
I'm German, Hermes is German. Still I ended up here just because of their confusing wording. I even went to Doddle today to check, but they were completely clueless and told me to talk to Hermes directly. It's just taking long for a return and and didn't even reach the status 'on its way' yet. 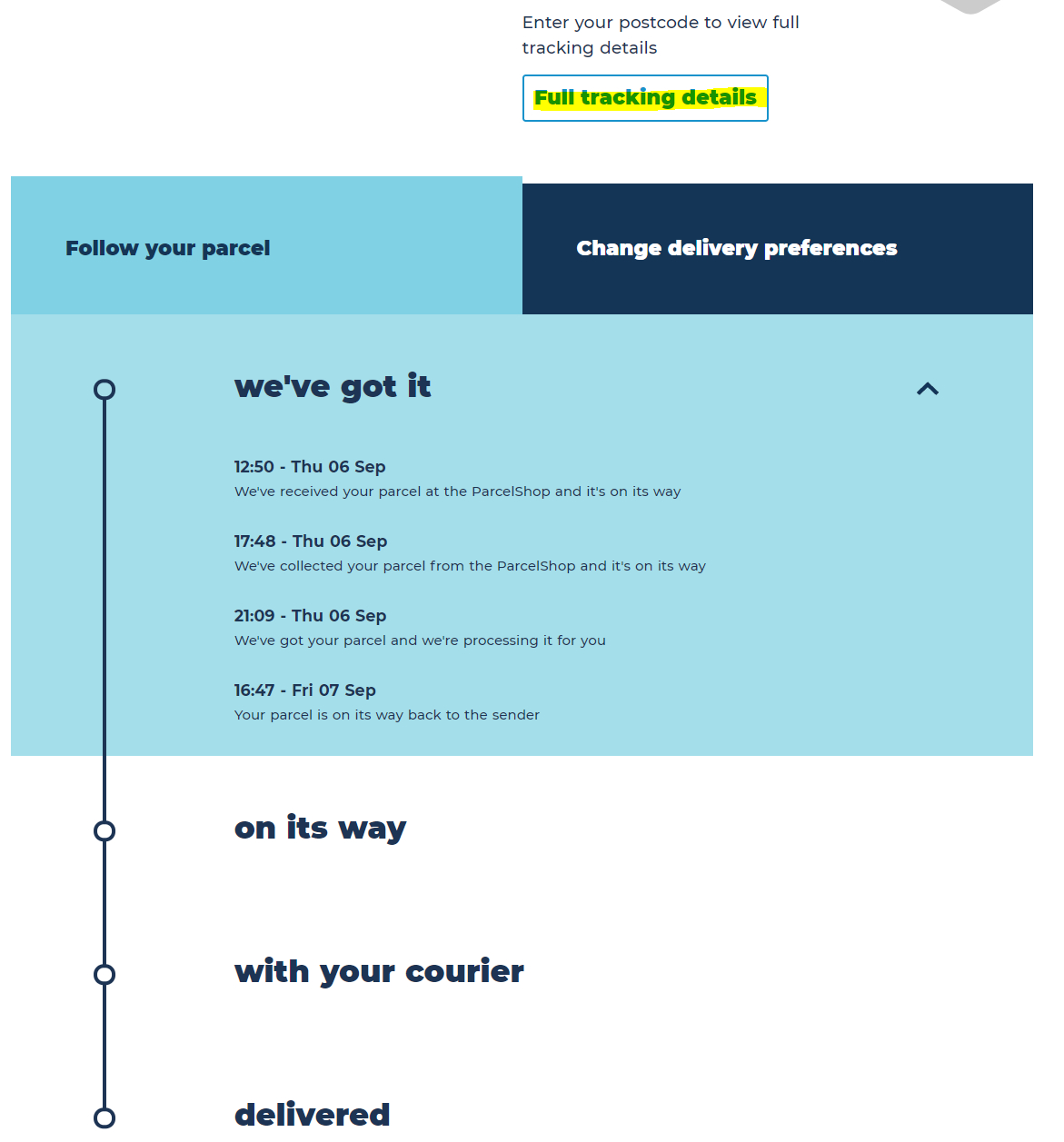 Also when I'm trying to get 'full tracking details' I have to put in a postcode. I tried the one that was on the parcel (to Amazon), the one from Doddle, and my home address. None did anything. Funny to see it's like that since at least January and they kept it this confusing way.
15th Feb 2019

wow, it's a year passed and they still haven't updated their wording. Got the same message for a return to Boden. As the label only had the boden company's address, and no info about mine, I was wondering where the parcel would be returned to - the shop I dropped it or where. Besides, I paid the postage so I was the sender. It's Hermes wording problem then.
17th Jan
Still the same message, and I'm thoroughly confused!
22nd Feb
I got this issue on yesterday. No idea how come the parcel has no further tracking results.
3rd Mar
So by all the things I’m reading.. does that mean my parcel will be delivered to me at some point then?
3rd Mar
I'm getting this message I'm the sender, I can't understand what is going on
21st May
I have the same issue and is May 2020. Still nothing change for Hermes but I am not sure if I will receive my parcel
30th May
To Be Returned actually means to be returned to the ORIGINAL sender (usually their returns department as specified on the address label).

Hermes clearly aren't going to change the wording as it's been like that for years.
Edited by: "bemad" 30th May
30th May
Sold a load of dvd's to musicmagpie recently, hermes tracking said "returning to sender". Well clearly I am the sender.

Luckily I've done this before so knew what it meant but really needs rewording.
6th Jun
The same for me just now - insane.
19th Jun
Same with me today, clearly Hermes never change lol
14th Jul
Same issue, 4/10 parcels saying "we've got it and the other 6 saying 'Your Webuybooks parcel status: