darrenhannahb96a1 108
Refreshed 5th Aug (Posted 4th Aug)Posted 5th Aug 2022
Please make sure you read all the information carefully below, along with any associated risks

Spread the word if you're onboard

The Plan: It's simple: we are demanding a reduction of energy bills to an affordable level. Our leverage is that we will gather a million people to pledge not to pay if the government goes ahead with another massive hike on October 1st.

Mass non-payment is not a new idea, it happened in the UK in the late 80s and 90s, when more than 17 million people refused to pay the Poll Tax – helping bring down the government and reversing its harshest measures.

Even if a fraction of those of us who are paying by direct debit stop our payments, it will be enough to put energy companies in serious trouble, and they know this. We want to bring them to the table and force them to end this crisis.
PostTweetShare Share with WhatsApp Share with Messenger
Community Updates
Dan_82
Information / FAQs taken from the Don't Pay UK site

***Please make sure you read all the information carefully below, along with any associated risks***


1. For this to work, we are aiming for a million people to join in. It's a big number but so is this crisis.

We’re organising Zoom calls, in person meet-ups and talking to our friends and neighbours, printing flyers and stickers and bringing people together.

We'll need people, organisations and community groups to do all of this too, building this up street by street, estate by estate and city by city.

The first step is to get thousands of people like you to say you support the strike, you can do this by signing up below and joining all our social channels. (Scroll down to 1 on the link)

2. We’re clear about this from the start: We only do this if we get a critical mass of people pledging to cancel their bills from October 1st.

That’s how many we need to show serious power to the energy companies and government who are taking us for a ride.

One million sounds like a lot, but millions more will already be thinking about whether they’ll be able to pay come winter and afford the other things they need to survive for them and their families.

Even more of us will be angry about paying more than double what we used to pay for the same amount we use. Let alone food, petrol and mortages.


3. Cancel our direct debits if the price hike goes ahead.On 1 October, if the government and big energy companies have not reduced our bills to an affordable level and if we have critical mass pledged to cancel their bills, we all cancel them on the same day.

It can only work if we believe in each other and show the powers that be that we would not stand for being treated as cash cows.


What is a non-payment campaign?

A non-payment campaign is when people collectively commit to not paying a bill or charge. One example would be the resistance to the Poll Tax: more than 17 million people refused to pay and it became impossible for the government to force people to pay. Even then many people were scared to act and not pay the tax. But as confidence grew and local Poll Tax Groups were formed to support each other, it became socially acceptable to not pay. Tens of thousands of liability orders were issued forcing people to pay - but people refused and eventually the Poll Tax was scrapped.

A more recent example was the non-payment campaign against Southern Water in Kent in 2020 after they were fined £90 million for dumping raw sewage into the sea. Outraged by those costs being passed onto consumers, a non-payment campaign took off and eventually residents won by getting 50% taken off their bills.


Should I stop paying right now?

You can do whatever you want, but we are saying to people that there is safety in numbers. If we all get this right, and act together then the impact would be felt massively. Of course many people are already unable to pay - which is why this action is necessary so we fight this together. What we are saying is let's face this all together and let's be prepared to do the same thing from the same date rather than be picked off and face this alone.


What will happen if we don't do this?

We know the Government won't step in and give people the support they need unless they are forced to. The Government's original response was a £200 'gift' that we had to pay back next year. They were forced to back down and announced £37 billion in packages. This was pretty much a subsidy to the big oil and gas energy generators and was heavily criticised. Energy companies aren't going to reduce prices out of the kindness of their hearts. We can't expect anyone apart from ourselves to do what's needed to force action on the cost of living.

National Energy Action (NEA) estimates 11,400 winter deaths are already caused by cold every year. By this winter, 6.3 million households won't be able to afford their energy bills. Tens of million households will be in 'fuel stress', meaning they spend more than 10% of income on energy bills alone. Citizens Advice says that self-disconnections are up eight-fold, with at least 3,600 self-disconnections between January and May this year already - meaning thousands of people simply don't have access to gas and electricity because it's too expensive.

The stakes couldn't be any higher. If we do nothing, the risks to us are huge. Doing nothing becomes riskier than doing something - and that something is we think a powerful strategy to resist what we are facing.

How do I participate if I’m on a pre-payment meter?

We still need people on pre-payment meters to get involved however and we do not want a divided movement where people do not see themselves involved - everyone needs to be involved. This could mean distributing leaflets, setting up local groups, posting on social media and convincing others to get involved.


Won't they just cut off my gas and electricity?

It'll be extremely difficult for energy suppliers to do so on a mass scale - but it is possible and you should know how the energy companies may respond if millions of us withhold payment.

Energy supply disconnections for non-payment are already extremely rare - as few as 8 in 2018 were reported. This is because certain rules govern energy suppliers' behaviour in non-payment cases:

We'll only go ahead with the non-payment strike if we have power in numbers. So, if energy suppliers decide to try to disconnect people, they'll be forced to first contact thousands, tens of thousands or even more customers about the possibility of disconnecting supply - but only after 28 days have passed. Then they'll have to give a chance to set up a payment plan before, in most cases, applying to a court for a warrant. It'll cause paralysis and create a months-long backlog.

We are very clear in that everyone that pledges to strike also pledges to defend the strike and that means protecting and supporting each other that are threatened by debt collectors. We will look after each other in this movement and build the solidarity to do that.


Can my landlord evict me if I don’t pay my energy bills?


Will striking affect my credit score?

Your energy bills aren't a loan, so missing payments aren't certain to affect your credit score in the same way. But some suppliers do report missed payments to credit agencies, so in those cases it's possible that there will be consequences to your credit score.

If you are worried about your credit score, remember that energy suppliers can't take any action if you make a payment within 28 days. It would still devastate a company's cashflow if thousands of people cancelled their direct debits and paid a few weeks later, with no consequences to the strikers.

When prices go up and our energy usage increases over winter, millions of us will miss payments whether it affects our credit score or not. It's important we take action together to stop it getting to that stage.

We also must remember that the whole nature of the economy runs off debt and if more and more people are unable to access credit then there is also a substantial risk the credit system that would also need intervention.

Will striking affect my mortgage repayments?

Your mortgage amount, interest rate, and monthly repayments are contractually agreed with your bank or building society. If you stop paying your energy bills, that won't have any effect on your mortgage.

Credit score is taken into account when applying for a new mortgage, or remortgaging. It's important that everyone understands what the risks are. However, we're already in a situation in which people are having to miss bills so they can pay their rent or mortgages. And with interest rates rising to 1.75% those on variable mortgages will also be feeling another rise in outgoings. 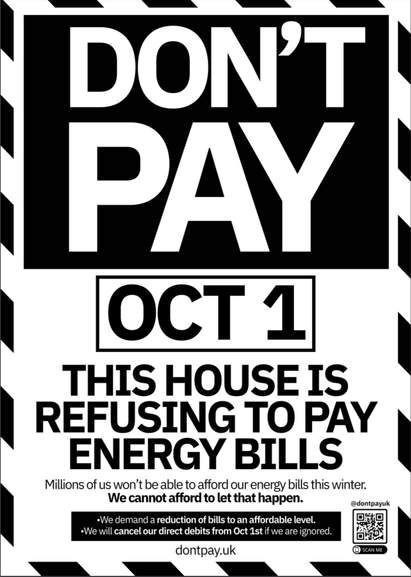 seafiant
For a very "British" campaign there seems to be nothing British about it.

Their website has zero contact information outside taking donations, no names for anyone involved and no proof at all that anyone taking the money is in the UK. Just a "don't call us, we'll call you" and "here you can print your own leaflets" page. So it stinks to high heaven.

However a simple WHOIS query and some digging shows the domain was registered by a hosting company with offices in the United States and Europe, none in the UK. That does not advertise in the UK directly (so you have to be overseas to know about it), and they just had to pay less than £3 to make it. £20K so far isn't a bad return on £3.

Data validation:
Nominet was able to match the registrant's name and address against a 3rd party data
source on 16-Jun-2022

IP Address 66.51.124.187 - -1 other site is hosted on this server [qdentity.blog - Software company physical address based in the Netherlands)